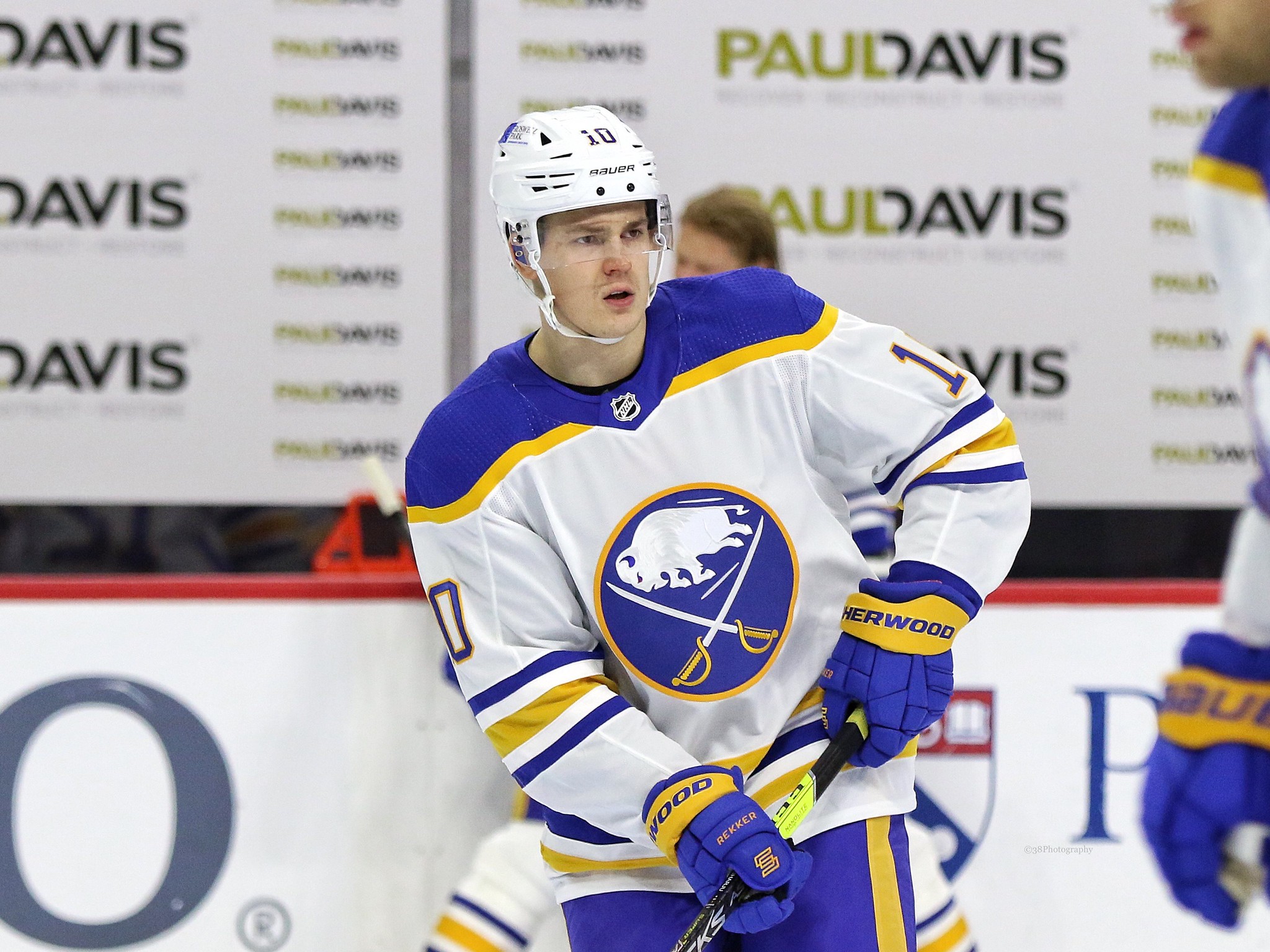 The 2021-22 season was Henri Jokiharju’s third in a Buffalo Sabres uniform. Since being acquired from the Chicago Blackhawks in the summer of 2019 in exchange for Alexander Nylander (a trash-for-treasure trade on Buffalo’s part), Jokiharju has largely had to find his own way and has endured more than his fair share of growing pains.

The Sabres have not developed defensemen well at all in recent history, as numerous coaching changes and system implementations have kept the team’s blue line corps in a near-constant state of flux. Coming off a 2020-21 season in which he struggled to stay in the lineup and even found himself demoted to the taxi squad at one point, Jokiharju certainly had the deck stacked against him as he aimed for improvement. In spite of this, the 23-year-old took a strong step forward and silenced many of his critics.

Jokiharju & Dahlin: the Oddly Even Couple

Unfortunately for Jokiharju, his quest for redemption in 2021-22 got off to a frustrating start. He suffered a lower-body injury in the Sabres’ first game and missed over a month as a result. When he returned just before Thanksgiving, head coach Don Granato made a bold choice and paired Jokiharju with fellow youngster Rasmus Dahlin.

Young players don’t always pair well together, but since Dahlin is an offensive defender and Jokiharju tends to stay at home, Granato likely figured the two would complement each other. But at first, that simply didn’t happen. The two seemed unable to get in sync throughout the first half of the season, as both struggled with their positioning and were frequently scored on. Despite this, Granato stayed the course and refused to separate them, and his foresight paid off.

As the season progressed, the duo slowly but surely began to gel and eventually emerged as the team’s number one pairing. Dahlin broke out and put together a very impressive finish to the year, and his influence on Jokiharju was noticeable. The Finn began to showcase his offensive acumen more frequently and finished the season with three goals and 16 assists for a new career-high of 19 points (from “Understand and overlooked, Henri Jokiharju taking big steps on defense for Sabres”, The Buffalo News, 2/12/22). He averaged 21:53 of ice time per game, including far more time on the power play than he had received in his first two seasons. And though his minus-8 rating didn’t reflect the strides he made with his defensive play, it was actually an improvement over the minus-11 he posted the year prior.

Though Jokiharju’s improvement this year was very noticeable, his most commendable achievement came at the tail end of the schedule. Granato decided to break up his top pairing and place Jokiharju with new arrival Owen Power, who joined the Sabres after his Michigan Wolverines were defeated in the Frozen Four. It goes without saying that Buffalo has big hopes for the first overall selection of the 2021 Draft and Granato tasked Jokiharju with guiding the 19-year-old through his first glimpse of NHL action. He told Buffalo’s WGRZ.com ahead of Power’s April 12 debut that he was keeping the approach simple, and it paid off.

“There’s a reason why he’s a first overall pick,” Jokiharju said. “I just try to help him. He’s going to do his own stuff, and I think that’s why he’s here, right? So my job is pretty easy.”

His words rang true. Power started his NHL career on a solid note, posting three points (including his first goal) in eight games and proved to all who watched that he is indeed worthy of the hype. Jokiharju deserves credit for this, as his relaxed mantra allowed Power to play his own game and showcase his strong skating and offensive instincts. Since the first year of his entry-level deal is now exhausted, the Sabres will more than likely keep Power in Buffalo next season rather than send him to the American Hockey League. If that’s the case, keeping him paired with Jokiharju in 2022-23 is a no-brainer.

Jokiharju Can Be a Steadying Force For Buffalo In The Future

Jokiharju proved in 2021-22 that he’s a more-than-capable defender and deserves the place he’s carved for himself in the Sabres’ lineup. While he was likely thought of as just a defensive defenseman prior to this season, he showed that you shouldn’t sleep on his offensive abilities either.

Buffalo has the makings of a strong defensive unit for the future, especially with the boosts Casey Fitzgerald and Mattias Samuelsson provided after their arrivals. Though general manager Kevyn Adams will have to clear out some space on the blue line over the summer, Jokiharju’s spot should be secure after his performance this season, as he has the potential to become an anchor while the likes of Dahlin and Power handle the offensive duties. He will be an important piece of the Sabres as the team continues its journey back to respectability.

Thanks so much for taking the time to read my content! I’m a Niagara University journalism graduate and a lifelong Buffalo Sabres and hockey fan. I’ll gladly discuss anything Sabres with you. Talk to me on Twitter too if you’d like!

Pappin, credited with Toronto’s last Cup-winner, dies at 82
Bowness’ quick return to NHL bench about belief in Jets
Is this just the start of an Avalanche dynasty?
Blue Jackets/Coyotes Blockbuster Could Steal 2022 NHL Draft Spotlight
Boeser re-signs with Canucks on 3-year deal