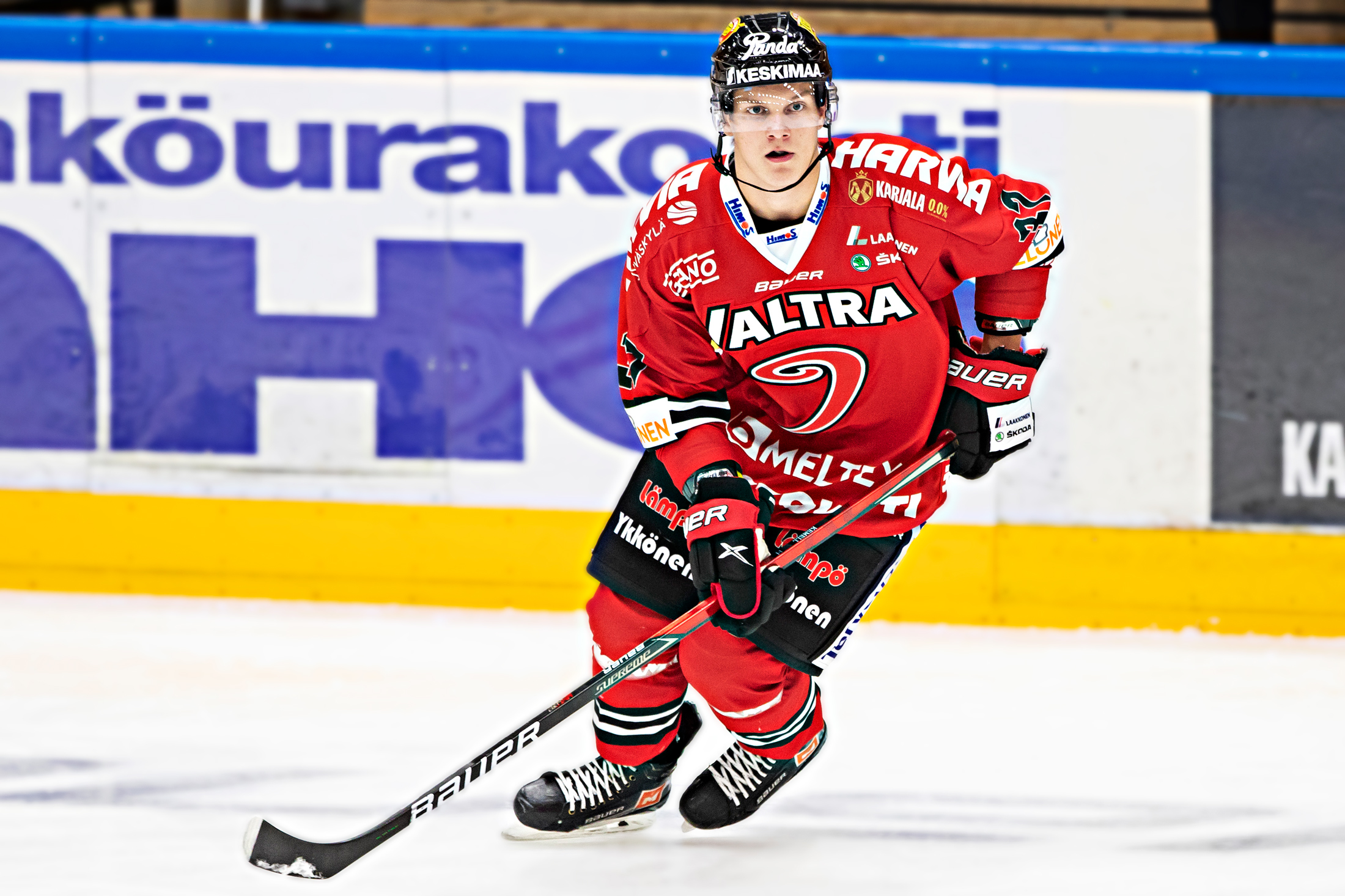 With the draft lottery complete and the draft still roughly three months away, the debate as to who the Ottawa Senators will select with the seventh overall selection has ramped up significantly. Over 20 prospects have been pegged for a top-10 selection, and those names are still shifting as several players are still competing in league playoffs or international tournaments. That makes this year’s draft more unpredictable than most, and it’s anyone’s guess as to who the Senators end up with.

That brings us to Joakim Kemell. A few months ago, the Finnish sniper looked like a lock to go in the top five, but then an injury and a cold streak caused some scouts to dig deeper into his game and find some concerning inconsistencies. He’s still regarded as a top-10 pick, falling right around the sixth or seventh spot, and many mock drafts have already slotted him in as the Senators’ selection. For a team starved for a top-end goal scorer, that’s fantastic news, but is he truly the best fit for the franchise?

Kemell started this season on a tear. At the Hlinka Gretzky tournament, he put up five goals in five games, then 12 goals and 18 points in his first 16 Liiga games, putting him among the highest-scoring draft-eligible players in league history. Scouts and fans were ready to crown him the consensus second overall at the upcoming draft behind Shane Wright, but at the end of October, he went down with an unfortunate injury that kept him out of action until December.

After returning, Kemell suffered a 14-game scoreless streak that lasted until March 4, 2022. He finished his rookie Liiga season with 15 goals and 23 points in 39 games, a fine result but nowhere near the pace he set early in the year. Thankfully, he finished very strong, joining Finland at the U18 World Championships, where he led the Fins with six goals and eight points in six games. Still, the hype surrounding him has cooled significantly; the most obvious example is his slight drop on the NHL Central Scouting’s Final Rankings, where he conceded the top spot to Slovak Juraj Slafkovsky.

So, who is Kemell? Is he an elite sniper, or is he simply the recipient of a lot of lucky bounces? It might be a bit of both. According to Will Scouch, he’s one of the best pure finishers in the draft, but he may have also benefited from playing against some weaker goalies. He hasn’t looked strong in transition or away from the puck, meaning he may need to be with strong play drivers to really live up to his potential. He also has a shoot-first mentality that sees him fire the puck whenever he has a chance, which leads to a lot of low-danger attempts that lead to turnovers.

With that said, he has excellent offensive sense and can easily find space where he will be in the best position to put the puck in the net. Additionally, The Hockey Writers’ Andrew Forbes said, “The holes in his game can be fixed or, at the very least, developed to become less of an issue when he’s on the ice.” Kemell is a dangerous player who’s bound to get better as he grows. He’s inconsistent, but he’s young. Already, scouts have seen improvements in his physicality and defensive awareness that weren’t there at the beginning of the season. The overall awareness and decision-making will come, and that could make him a future top-six NHL player.

Plain and simple, the Senators need to score more goals, especially from the rest of their roster. Outside of their top line of Josh Norris, Drake Batherson (who was on pace to hit 30 goals before his injury), and Brady Tkachuk, the team only had one 20-goal scorer in Tim Stützle. No one else was all that close, either; Alex Formenton hit 18 goals in his first full NHL season, and a 20-goal season is well within the cards for him, but 30 seems a stretch. Connor Brown and Austin Watson, the next highest on the list, both only totaled 10 a piece.

Looking deeper into their scoring issue, the Senators finished the 2021-22 season with eight players who played at least 10 games with the team and had a positive Corsi for percentage (CF%). Of those eight, five of those were within one point of 50 percent, the bare minimum to be considered having a positive offensive impact. Compare that to the Florida Panthers, who had all but two players cross the 50 percent threshold. Looking just within their division, the Toronto Maple Leafs, Boston Bruins, and Tampa Bay Lightning also had at least half their roster sitting at about a 51 percent CF%, while the Buffalo Sabres had fewer players at 50 percent than Ottawa but had more players score at least 20 goals, which partly explains why they finished higher.

Compiling the Senators’ problems is that they have little depth on the right wing. Currently, their top right-wing prospect is arguably Egor Sokolov, who is destined for a third-line role, as is last year’s first-round pick Tyler Boucher, while Zach Senyshyn, at 25 years old, has limited upside. Carson Latimer, currently with the Western Hockey League’s Edmonton Oil Kings, is a long shot to make the NHL, although he could provide middle-six support if his development goes well. The only strong depth piece with upside at this time is Mathieu Joseph, who came in and scored 12 points in 11 games. However, it’s uncertain if that will translate over an 82-game schedule.

Kemell’s Fit With the Senators

Without strong finishers and little depth, the Senators will be in for a tough time to improve upon their 2021-22 record, which saw them win 26 games. It’s almost certainly at the top of their priority list heading into the offseason, and already, the rumour mill has swirled with possible trade targets. One of the most popular is Kevin Fiala, who put up a career season with the Minnesota Wild with 33 goals and 85 points in 82 games. The 11th overall selection in 2014 has always been a strong offensive player, but he kicked it into overdrive in 2021-22, just in time to sign a new contract.

That’s primarily why his name has popped up in the rumour mill. While Minnesota may want to keep him around, they may not be able to afford him, especially with roughly $7 million in projected cap space for 2022-23 and a number of important positions to address. Fiala’s next deal will almost certainly be in the $7.5-8 million range. The Athletics’ Ian Mendes points out that the asking price could be similar to what it cost the Florida Panthers to acquire Sam Reinhart last summer — a first and a goaltending prospect (from ‘Should the Senators trade for Kevin Fiala? What would it take?’, The Athletic – 18/05/2022). However, with the New Jersey Devils also looking at Fiala, the Senators may quickly find themselves in a dangerous bidding war that will cost them far more than they are willing to part with.

Since the Senators would likely be offering the seventh overall and someone like Filip Gustavsson, the team would be better off grabbing Kemell with their 2022 selection. He’s surprisingly similar to Fiala, too; they both play on the wing, stand under 6-foot-0, and are known for their soft hands and quick feet. They both put up big numbers internationally in their draft year but were less impressive in their respective leagues. They’ve even both been criticized for defensive inconsistencies and lapses that hurt their teams but with the hope that those issues will round out in the future.

However, Kemell has some additional features that would make him both a better fit on the Senators and a better player overall. First off, he’s seven years younger, and although that means it’ll be some time before he comes to North America, the Senators can be more mindful in watching and helping his development. Fiala, at 25 years old, is practically finished developing and now entering his prime. Kemell is also more physical, claiming in an interview with IIHF’s Chris Jurewicz, “Sometimes I just like to hit other players.” He also stands an inch taller than Fiala, which may not seem like much, but there’s a chance he could still hit 6-foot-0 before he hits the NHL.

Finally, and arguably most importantly, there’s no telling how Fiala will meld with the core currently in place, and while it’s possible he meshes well like Joseph, it’s just as possible he crashes like Derek Stepan or Evgeni Dadonov, both of whom were expected to take over a top-six role. Drafting, on the other hand, is far less risky than trading. The worst-case scenario is the prospect doesn’t pan out, whereas a trade could have detrimental effects that span for far longer than the player stays with the team. So, if the Senators are looking at Fiala, then their best option is likely to try to draft Kemell in July.

Blues Defense Needs Creative Solutions
Bowness returns to Winnipeg as Jets’ new coach
Have your say: What should the Leafs do with William Nylander?
‘I would have done the same thing:’ Bowness OK with being Jets’ second choice
Bears sign Ness to AHL deal