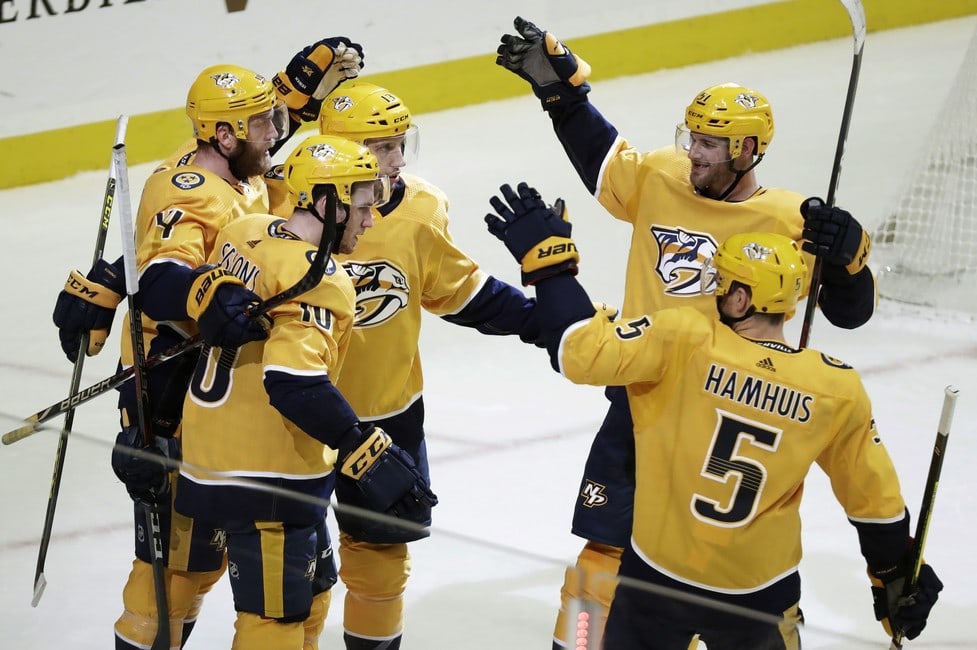 Today was a big date in National Hockey League history for teams making it to the Stanley Cup Final. Some teams made it for the first time, while others returned for the first time in a long while. Let’s begin our daily voyage back in time to relive all the best moments May 22 has provided over the years.

May 22 has been very kind to the Detroit Red Wings over the years. In 1997, goaltender Mike Vernon recorded his fifth career playoff shutout, and second with the Red Wings, as they won 6-0 over the visiting Colorado Avalanche in Game 4 of the Western Conference Semifinals. Igor Larionov had a pair of goals in the first period to get the offensive attack going.

Five years later, these same two teams met in Denver for Game 3 of the Western Conference Final. Dominik Hasek became the first goaltender to ever pick up an assist on a postseason overtime goal in the Red Wings 2-1 victory. Defenseman Fredrik Olausson scored the overtime winner, his first playoff goal since 1992.

Nicklas Lidstrom made league history on May 22, 2009, when he took the ice against the Chicago Blackhawks in Game 3 of the Western Conference Final. He broke Larry Robinson’s record by playing in his 228th career Stanley Cup playoff game. Unfortunately for the Red Wings, they lose 4-3 in overtime. Lidstrom retired with 263 postseason games played, the second-most in NHL history behind his former teammate Chris Chelios, who played in 266 playoff games.

Punching Your Ticket to the Final

On May 22, 1992, the Blackhawks advanced to the Stanley Cup Final for the first time since 1973. Brian Noonan scored a pair of goals in the 5-1 victory over the Edmonton Oilers in Game 4 of the Campbell Conference Final. It was their 11th straight victory of the 1992 postseason, setting a new NHL record for the most consecutive wins in a single playoff year. Unfortunately, this was their last win of the season as the Pittsburgh Penguins swept them in the Final.

Patrik Elias extended his team-record playoff point-scoring streak to 10 straight games on May 22, 2001. He helped the New Jersey Devils advance to the Stanley Cup Final with a 4-2 win against the visiting Penguins in Game 5 of the Eastern Conference Final.

The Tampa Bay Lightning clinched a spot in the Stanley Cup Final for the first time in franchise history on May 22, 2004. Ruslan Fedotenko and Freddy Modin scored to lead the way in a 2-1 win over the Philadelphia Flyers in Game 7 of the Eastern Conference Final. Lightning captain, and future Hall of Famer, Dave Andreychuk, advanced to his first Final after 22 seasons in the NHL.

Three years later, the Anaheim Ducks booked their trip to the Stanley Cup Final for the second time in franchise history. They knocked out the Red Wings with a 4-3 in Game 6 of the Western Conference Final. Sammy Pahlsson gave the Ducks a 4-1 lead with just under six minutes to play, but Pavel Datsyuk scores two goals to make things interesting.

On May 22, 2012, the Los Angeles Kings beat the Phoenix Coyotes 4-3, in overtime, in Game 5 of the Western Conference Final. Dustin Penner’s overtime goal gets the Kings into the Stanley Cup Final for the first time since 1993. The Kings go 12-2 while beating the top three seeds in the Western Conference. They also were 8-0 on the road, at this point, and set an NHL record for 10 straight road playoff wins.

The Nashville Predators clinched their first conference title on May 22, 2017, with a 6-3 win over the Ducks, in Game 6 of the Western Conference Final. Colton Sissons has a night to remember by scoring three goals, including the series-clincher late in the third period. Peter Laviolette becomes the first head coach to lead three different teams to the Stanley Cup Final.

On May 22, 1970, the NHL announced that the league would expand from 12 to 14 teams for the 1970-71 season. The Buffalo Sabres and Vancouver Canucks were officially granted franchises on this date. Both of these teams joined the old East Division, made up of the “Original Six” teams. To even up the two divisions, the Blackhawks moved over to the West Division with the six teams that joined the league in 1967.

On May 22, 1972, Hall of Famer Bernie Geoffrion was named the first coach of the expansion Atlanta Flames, four months before the team opened its first training camp. He would spend three seasons behind the bench in Atlanta, going 77-92-39 with one playoff appearance.

On May 22, 1973, the Boston Bruins acquired goaltender Gilles Gilbert from the Minnesota North Stars in exchange for Fred Stanfield. Gilbert won 155 games over seven seasons with the Bruins and led them to the 1974 Stanley Cup Final. Stanfield scored 24 goals and 70 points in a season and a half with the North Stars before being traded to the Sabres.

Plenty of history was made on May 22, 1986, as the Montreal Canadiens beat the Calgary Flames 1-0 in Game 4 of the Stanley Cup Final. Goaltender Patrick Roy made 15 saves to pick up his first of 23 career playoff shutouts, the second-most all-time. Claude Lemieux scored the game’s only goal for his fourth game-winning goal of the postseason, setting a rookie record. The Canadiens also became the first team to win 10 home games in one playoff year and the first ever to win 100 Stanley Cup Final games.

One year later, on May 22, 1987, Ron Sutter had three assists as the Flyers overcame a 3-0 deficit midway through the game for a 5-3 win over the Oilers in Game 3 of the Stanley Cup Final. It was the Flyers’ first win of the series that they eventually lost in seven games.

On May 22, 1992, the Jets signed Alexei Zhamnov to his first professional contract after drafting him in the fourth-round (77th overall) of the 1990 NHL Entry Draft. He scored 103 goals and 267 points in 235 games for the Jets before being traded to the Blackhawks in the deal that brought Jeremy Roenick to the Coyotes.

Kirk McLean recorded his second consecutive shutout and tied an NHL record with his fourth of the playoffs on May 22, 1994, as the Canucks won 2-0 over the Toronto Maple Leafs in Game 4 of the Western Conference Final. It was McLean’s sixth career playoff shutout as the Canucks took a 3-1 series lead.

Valeri Kamensky assisted on the first goal then scored the game-winner in the third period on May 22, 1999, as the Avalanche beat the Dallas Stars 2-1 in Game 1 of the Western Conference Final. Colorado tied an NHL playoff record with their seventh straight road win.

On May 22, 2021, Vegas Golden Knights goaltender Marc-Andre Fleury climbed into third in NHL history with his 16th postseason shutout when he blanked the Minnesota Wild 4-0 in Game 4 of the first round of the 2021 Playoffs. He is now tied with Curtis Joseph and is behind only Martin Brodeur (24) and Patrick Roy (23) for the most all-time.

May 22 isn’t the busiest day for birthdays with just 16 current or former players celebrating today. The most notable birthday boys are Rich Preston (70), Andrei Nazarov (48), Janne Niinimaa (47), and Marc Pouliot (37).