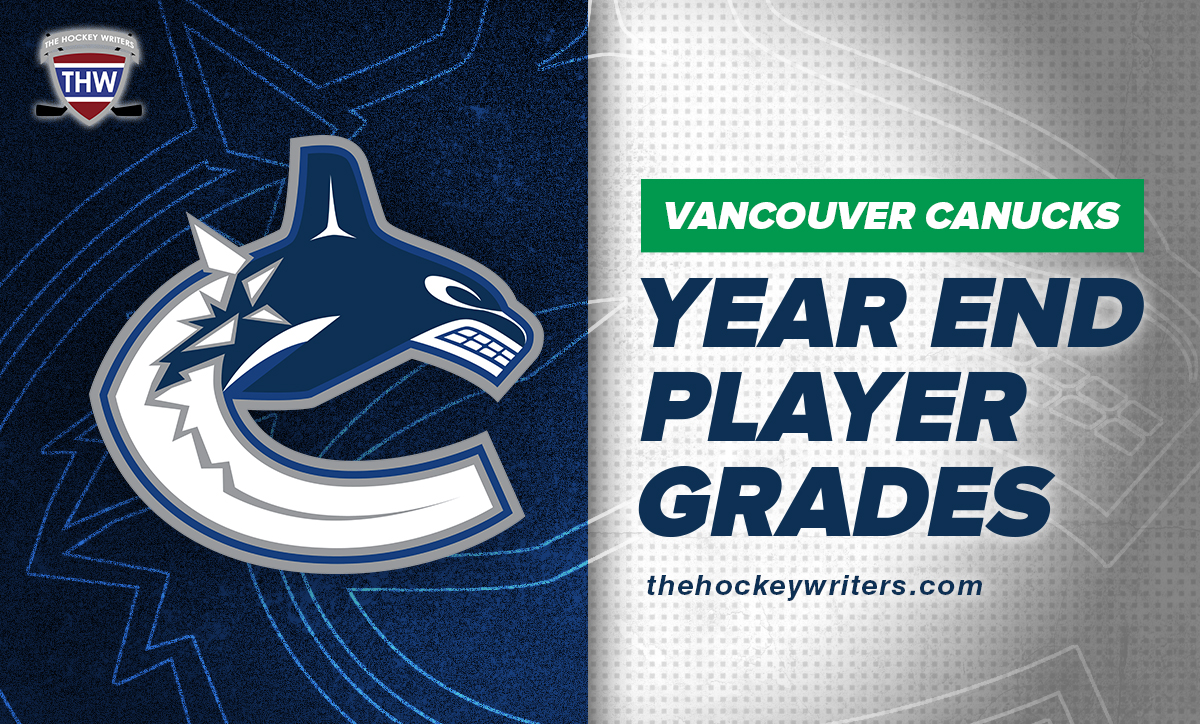 With the conclusion of the NHL regular season for the Vancouver Canucks, they’ll take some time in the offseason and get ready for the 2022-23 campaign. But as we look back on this past year, we’ll dive in at some of the players and their year-end grades. For today, we’ll focus on: Brad Hunt, Tucker Poolman and Brad Richardson.

Now, with player grades come an interpretation of what each person saw over the course of the year, with each list consisting of roughly three-player breakdowns. With each breakdown, we’ll not only look into their overall stats and analytical numbers, but also their impact on the organization and outlook moving forward with the team.

Poolman signed with the club this past offseason to a four-year contract with an average annual value (AAV), of $2.5 million to solidify a depth role on the defensive core. The move was an interesting one, considering Poolman had never played more than 57 games in a season, and was already 27 years old at the time of the signing. The former fifth-round selection (127th overall), of the Winnipeg Jets back in 2013, was brought in to bolster the right side of the blue line, which also featured Tyler Myers and Luke Schenn at the time. Let’s take a look at his numbers from this past season.

As mentioned earlier, Poolman wasn’t necessarily brought in for his offensive prowess. He did break out in the 2019-20 season with the Jets, where he put up four goals and 12 assists in 57 games. This season, however, in just 40 games played, Poolman had a goal and two assists. Only two players had fewer points than Poolman on Vancouver: Travis Dermott, who only played in 17 games after the Canucks acquired him from the Toronto Maple Leafs at the trade deadline, and Madison Bowey, who dressed just twice. Over the course of a full season, Poolman would definitely have better numbers (as his 2019-20 season suggests), but this was a tough start to a brand new four-year contract.

One of the big reasons Poolman was brought in was to shore up the defensive depth on the Canucks’ roster. Whether it was on the second or third-pairing, the move seemed to shore up the right side for the Canucks. Along with Myers, Travis Hamonic was also a part of the core to begin the season, as well as Schenn. By the end of the year, however, the right side featured Myers, Schenn and Dermott.

Breaking down Poolman’s defensive numbers, they weren’t anything crazy either. His Corsi For Percentage (CF%), was 44.8%, which dipped below his career average of 46.4%. What’s troubling for Poolman is his CF% has decreased with every season that passes, so Vancouver is hoping that isn’t a trend. His Fenwick For Percentage (FF%), which calculates how often their team is controlling the puck at 5-on-5, was just 45.5%. However, the one number that stands out is the team save percentage (SV%), with him on the ice was .905%. Again, it’s far from his career average of .922%, which may be a sign of better things to come moving forward.

Going over all of the numbers and information, there certainly is room for improvement from the Iowa native, but with the injury bug, lack of offensive production and lack of defensive presence, he along with the Canucks will hope for a better season in year two (from ‘Canucks’ Tucker Poolman thrown another curve by migraines,’ The Province, April 4, 2022).

A veteran of 17 seasons, Richardson has had quite a successful NHL career. He is a Stanley Cup champion with the Los Angeles Kings back in the 2011-12 season, and has played in 869 games with six different teams. Richardson has actually had two separate runs with Vancouver, the first dating back from 2013 to 2015, where he played in 118 games. He was claimed off of waivers from the Calgary Flames earlier in the season for his second time around with the organization. Let’s see how he did in his 17 games with the Canucks.

Right after being claimed off of waivers, Richardson acknowledged where he was at in his career, but loved the idea of a second time around with Vancouver, “I’m older and maybe slower, but I’ve always loved being here and I’m happy to be back. It’s cool.” (From “‘New’ Canucks Forward Brad Richardson is ‘cool’ coming back to Vancouver”. The Province, 03/22/22). At this stage in his career, Richardson wasn’t brought on for his offensive upside.

Though he is just three years removed from a 19-goal season with the Arizona Coyotes, his career-high before that was back in 2006-07 season with the Colorado Avalanche, where he scored 14 times. In 44 total games between the Flames and Canucks, Richardson had four goals and four assists. The difference is that it took him 10 fewer games with Vancouver (17), to post the same numbers he had with Calgary (27).

Now, defensively at 37 years of age, the expectation shouldn’t be sky-high, especially for a player that played just 17 games with the team. his CF% was just 40.6% with his FF% faring even worse at 39.5%. However, there are a few numbers that jump out. His face-off percentage (FO%), has always been impressive, with a career 53.1% on the draws. and he continued to be with the Canucks, winning 57.3% of the face-offs taken. The other number that stands out is the teams on ice SV% when Richardson was on the ice, which was an impressive .931%. Considering the Canucks total SV% on the season was .909%, that’s a significant increase.

It’s uncertain whether or not Richardson will be back for his 18th season, whether it’ll be with the Canucks or at all. But based on his role and usage, this was about as expected for a fourth-line player averaging 10:53 TOI per game. One could argue based on his F0% and team SV% he could climb in the B category, but given the limited amount of games and ice-time, a high C felt correct.

Another journeyman player on this list, the 33-year-old Hunt’s career spans nine NHL seasons, playing for six different NHL clubs. While primarily playing on the bottom pair, Hunt had an opportunity after being signed to a one-year contract with an AAV of $800,000 when the Canucks lost Poolman and Hamonic over the course of the season. Despite his limited time with Vancouver, his numbers are fairly solid.

Hunt seems to be a late bloomer when it comes to offensive output on the blue line. He hit double digits with the Vegas Golden Knights at 29, where he put up 18 points in 45 games. His best season came in the 2019-20 campaign where he had eight goals and 19 points in 59 games with the Minnesota Wild.

Related: Canucks Have 3 Free Agent Targets That Will Bring “Sandpaper”

With Vancouver this season, Hunt produced 17 points in just 50 games, which over an 82-game span averages out to 28 points. Getting a bottom pairing defenseman that can put up nearly 30 points playing 15:15 TOI per game would be a nice benefit for the Canucks heading into next season.

Defensively, Hunt has always shown strong underlying numbers. While he’s played for generally strong defensive teams, including the Golden Knights and Wild, his numbers with Vancouver were solid. For his career, he’s had a CF% of 54.7%, with his best individual season coming with Vegas, posting a 64.2%. While he was limited to 50 games, with the Canucks had a 50.7 CF%. His FF% numbers were also solid, posting a 51.2%. To go with that, his team’s SV% was overall good, with a .912 SV% when Hunt was on the ice.

Similar to Richardson, we don’t know whether Hunt will be back with the roster, but considering a possible trade with Oliver Ekman-Larsson, that would leave Quinn Hughes and Kyle Burroughs on the left side. But he could be brought back on a relatively team-friendly deal to provide a stable bottom-pairing defenseman, who despite being 33 years old, has played in just 241 career games, meaning there isn’t a lot of mileage on his body and he has plenty left in the tank to offer.

We will be doing player grades for the entire Canucks roster throughout the offseason, similarly breaking down their statistics, roles and future with the team. If a player is not on this list, make sure to follow along with the series to view each player breakdown as we head into the 2022-23 season.

I’m a London, Ontario based broadcaster and sports writer for the Vancouver Canucks. I’ve done work in the past reporting on the NHL, NBA and MLB. I’ve also covered the OHL including the Owen Sound Attack and am currently involved with the London Knights.