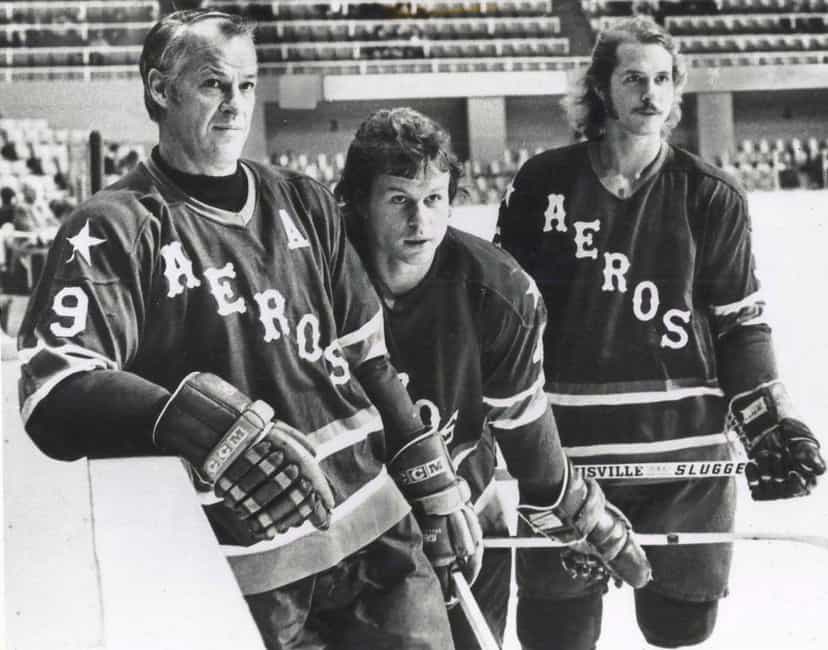 This has been a memorable date for many National Hockey League franchises over the years. We saw everything from overtime wins, return trips to the Stanley Cup Final, and even a name change. Let’s hop aboard the THW time machine and relive all the great moments from May 23.

A Great Day in Chicago

May 23 has been a very kind day for the Chicago Blackhawks over the years. In 1968, they traded defenseman Pierre Pilote to the Toronto Maple Leafs for Jim Pappin. Pilote neared the end of his Hall of Fame career and played just one season with the Maple Leafs.

Meanwhile, Pappin was a very productive player in seven seasons in Chicago. He had four seasons of at least 30 goals, including a career-high 41 during the 1972-73 season. Overall, Pappin scored 216 goals and 444 points in 488 games before being traded to the California Golden Seals in 1975.

On May 23, 2010, the Blackhawks beat the San Jose Sharks 4-2 to complete a four-game sweep of the Western Conference Final. Dustin Byfuglien scored his third game-winning goal of the series as the Blackhawks advanced to the Stanley Cup Final for the first time in 18 years.

Five years later, they beat the Anaheim Ducks 5-4 in double overtime in Game 4 of the Western Conference Final. Antoine Vermette, a healthy scratch in a Game 3 loss, scored early in the second overtime to even the series at two wins apiece. With the win, the Blackhawks became the first team in NHL history to win four multiple-overtime games in the same playoff.

The Penguins beat the Minnesota North Stars 6-4 on May 23, 1991, in Game 5 of the Stanley Cup Final. Mario Lemieux and Kevin Stevens gave the Penguins an early 2-0 lead before Mark Recchi extended the advantage to 4-0 with a pair of goals. It was the fastest 4-0 lead ever in Stanley Cup Final history as it took just 13:41 of game time to obtain it. Defenseman Larry Murphy picked up four assists as the North Stars made things interesting before the end of the night.

Exactly one year later, the Penguins were headed back to the Stanley Cup Final. On May 23, 1992, Lemieux scored twice to lead the Penguins to a 5-1 win at the Boston Bruins, completing a four-game sweep of the Wales Conference Final.

On May 23, 1977, Gordie Howe left the Houston Aeros and, along with sons Mark and Marty, joined the New England Whalers of the World Hockey Association.

Two years later, the Whalers officially become the Hartford Whalers as they prepared to join the NHL for the 1979-80 season after the WHA ceased operations.

The current Whalers, the Carolina Hurricanes, picked up a huge Stanley Cup playoff win on May 23, 2002. Despite being outshot 31-15 by the Maple Leafs, Arturs Irbe made 31 saves for his first career playoff shutout in the Hurricanes 3-0 road win in Game 4 of the Eastern Conference Final.

On May 23, 1978, defenseman Serge Savard picked up three assists as the Montreal Canadiens won 4-1 over the visiting Bruins in Game 5 of the Stanley Cup Final. These were the only three points Savard had in the series, which the Canadiens won in six games.

Bernie Nicholls came back from a one-game suspension on May 23, 1994, and scored twice to lead the New Jersey Devils to a 4-1 win over the New York Rangers in Game 5 of the Eastern Conference Final. Nicholls was forced to sit out the previous game because of a vicious cross-check to Alex Kovalev in Game 3.

Paul Coffey made playoff history on May 23, 1995, in the Detroit Red Wings 6-2 victory over the San Jose Sharks in Game 2 of the Western Conference Semifinals. Coffey assisted on two goals to tie Denis Potvin for the most playoff points scored by a defenseman, with 164. He retired with 196 career postseason points, the sixth-most in league history.

On May 23, 1997, Eric Lindros scored a power-play goal with 6.8 seconds remaining in regulation to lead the Philadelphia Flyers to a 3-2 win over the Rangers. With their win, the Flyers took a 3-1 lead in the Eastern Conference Semifinals.

Lindy Ruff became the Buffalo Sabres’ all-time leader in playoff coaching victories on May 23, 1999, breaking the mark of 18 held by Scotty Bowman. The milestone victory came in a 5-4 win at the Maple Leafs in Game 1 of the Eastern Conference Final.

A year later, Joe Nieuwendyk scored in overtime to give the Dallas Stars a 3-2 win over the Colorado Avalanche in Game 5 of the Western Conference Final. Goaltender Ed Belfour made 29 saves to help the Stars earn a 3-2 series lead.

The Washington Capitals beat the Tampa Bay Lightning 4-0, on May 23, 2018, in Game 7 of the Eastern Conference Final. Alex Ovechkin scored the game-winning goal to get the Capitals into the Stanley Cup Final for the first time since 1998. Braden Holtby made 29 saves to pick up his second straight shutout.

After tying the Predators’ record for saves in Game 3, Juuse Saros set another one by becoming the second NHL goalie since 1955-56 to make at least 50 saves in consecutive playoff games when he made 58 saves in Game 4 on May 23, 2021, in a 5-3 win over the Carolina Hurricanes.

On that same night, Nathan MacKinnon became the first player in Avalanche/Quebec Nordiques history to score nine points in a series while playing only four games when his Avs swept the Blues after a 5-2 win in Game 4.

To keep the milestones going in 2021, Patrice Bergeron scored his fourth series-clinching goal on May 23 when he helped his team dispatch the Washington Capitals in Game 5 of their first-round series, and moved into second in Bruins history with 24 points in series-clinching games (11 goals, 13 assists). David Krejci still holds the lead with 28 points.

Finally, to close out this busy night in 2021, Blake Wheeler and Josh Morrissey scored 16 seconds apart in the third period to rally back from a 4-1 deficit to beat the Oilers 5-4 in Game 3 of their series. The two goals were the fastest playoff goals in Winnipeg Jets’ history.