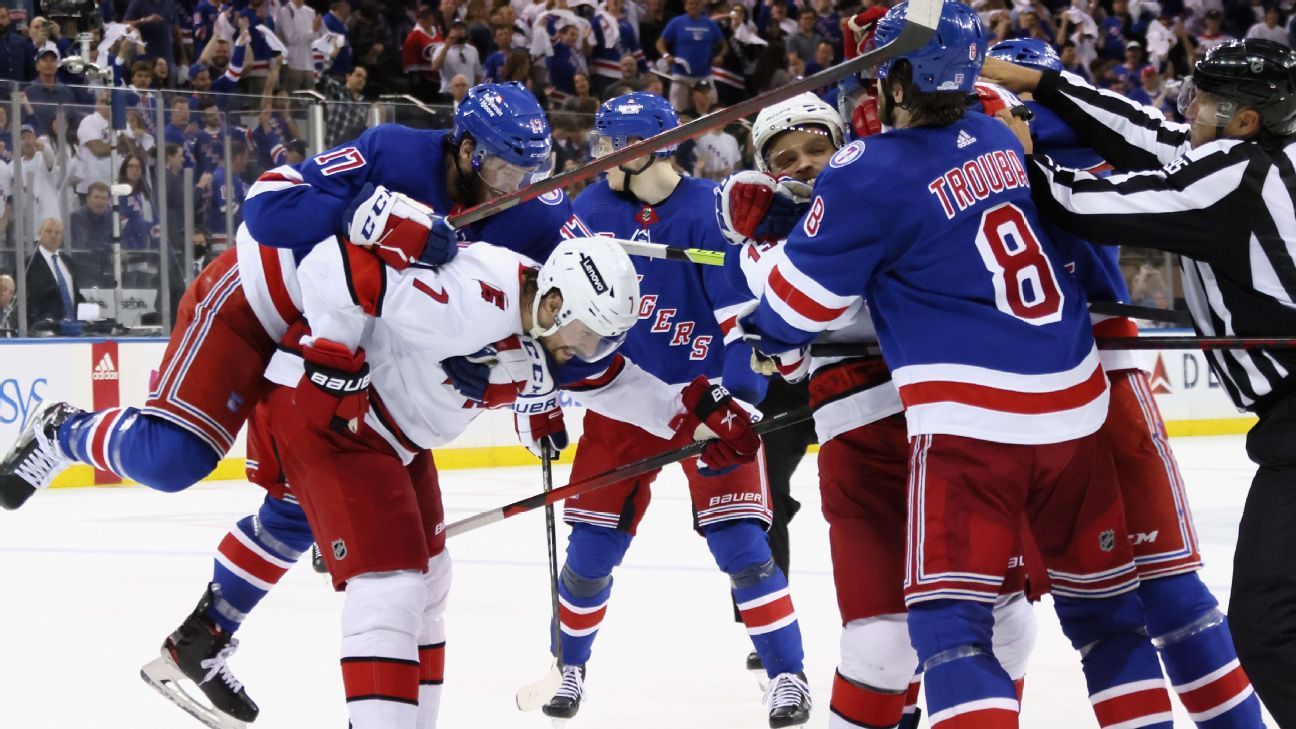 New York Rangers winger Ryan Reaves had some regrets after Game 3 against the Carolina Hurricanes. Not about the result, which was a 3-1 Rangers victory at Madison Square Garden that cut their series deficit to 2-1. But about the immediate aftermath.

Reaves was on the ice at the final buzzer when Carolina forward Max Domi gave Rangers defenseman Ryan Lindgren a cross-check in New York’s zone, leading to the two wrestling to the ice. Meanwhile, Hurricanes defenseman Tony DeAngelo was trading words with the Rangers’ bench, causing an irate coach Gerard Gallant to snap back.

“You never want to see a guy chirping your bench,” Reaves said. “I wish I would have seen that. I was looking more at the Domi/Lindgren thing. It happens in playoff games. I guess guys feel a little braver because they know scrums like that aren’t going to result in anything. I wish I were a little quicker to the scrum, for sure. I wish I would have grabbed him first.”

Gallant memorably called it “the bulls— at the end of the game that they initiated,” and decried what he saw as a futile attempt by the Hurricanes to send a message ahead of Tuesday night’s Game 4.

“The game is over,” the coach said. “They’re not sending any message. We’ve got the guy that can handle all their guys if we want to.”

Did he mean Reaves, one of the NHL’s last remaining enforcers?

“I never said his name,” Gallant said with a laugh Monday.

Gallant coached Reaves with the Vegas Golden Knights before they both joined the Rangers. “He did his job perfectly [in Vegas]. It’s not about going out there and fighting. What’s he fought, twice this year?” asked Gallant. (It was three times.) “He’s just an insurance blanket for you there. Our guys know we have him there.”

In a brief few moments at the end of Game 3, the second-round series between the Rangers and Hurricanes became a series Reaves would love. Emotions boiled over. Penalties were earned. Trash was talked.

The Hurricanes deny there was “message sending” at the end of Game 3. Coach Rod Brind’Amour responded as if he were taken aback by Gallant’s claim.

“He really said that?” he said, noting that players such as Martin Necas and Jesperi Kotkaniemi were on the ice when Domi mixed it up with Lindgren. “I don’t know what he’s talking about. We don’t really have guys that send messages.”

“I don’t know what message we were sending,” rookie forward Seth Jarvis said. “We played until the final buzzer and then stuff got out of hand.”

But the Rangers are clearly looking to use the incident as a green light for more physicality in the series, which Gallant believes is to their benefit.

ESPN and ESPN2 will be broadcasting first- and second-round games, with one conference finals series on ESPN and the Stanley Cup Final on ABC.
• How to watch
• Subscribe to ESPN+
• Stream the NHL on ESPN

“I like to see our guys get a little pissed off once in a while,” he said. “We play better. It helps us get more focused a little bit.”

Reaves agreed. “Some of those top guys getting a little more physical,” he said. “I think our team thrives on that. Some teams shy away. I think we do well with that.”

Obviously, there are limitations to that physicality. While the Hurricanes have sputtered on the power play on the road, going 1-for-19 in the playoffs, the Rangers don’t want to tempt fate by taking irresponsible penalties. They’ve benefitted from being one of the most disciplined teams in the playoffs, averaging 3.30 penalties per 60 minutes, behind only Colorado in staying out of the penalty box.

“You don’t want to go get outside your game,” defenseman Justin Braun said. “You don’t want to be taking stupid penalties in a series that’s this tight. You gotta have that physicality but you’ve gotta keep your head.”

That said, the Rangers will remember Domi wrestling with Lindgren after the buzzer. They’ll remember DeAngelo at the benches, increasing the heat he already had with his former team. The question is, will that manifest into some extra physicality coming the way of those players in Game 4?

Reaves pondered that question Monday, bobbing his head while a prolonged “ummmm” hummed through his mouth. A smile slowly crept across his face.

“I don’t want to say anything stupid here,” he said, drawing a laugh. “I’m sure [our] guys aren’t going to shy away from finishing checks on those guys. There’s going to be some added nastiness when a specific player does something.”