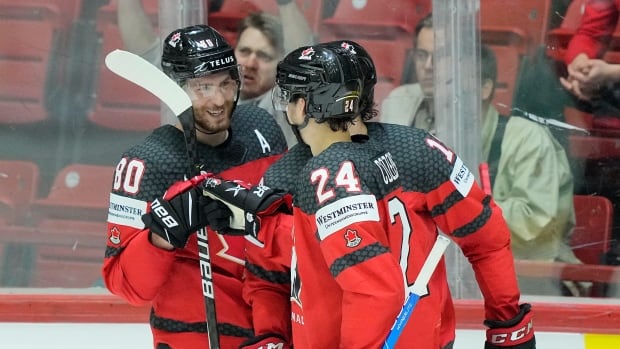 Canada is through to the quarter-finals at the men’s world hockey championship after beating France 7-1 Tuesday in Helsinki, Finland.

Coming off a surprising 3-2 loss to Denmark on Monday, the Canadians jumped out to 2-0 lead before the end of the first period and refused to relent for the rest of the game.

“I liked the way we played for the full 60 minutes tonight. We did the things we needed to do and improved on some of the aspects of our game we wanted to focus on,” said head coach Claude Julien. “We were moving the puck a lot better, getting more shots and we had net-front traffic, and I am happy with the way our guys responded today.”

Pierre-Luc Dubois led with two goals and an assist, Dylan Cozens scored and added a pair of helpers, Zach Whitecloud put up one of each and Drake Batherson contributed four assists.

“We are confident in our team and the players we have, and we need to play our game and play the right way to have success now that a medal is on the line.”

Team Canada ends a two game losing streak, at the world hockey championships, with a complete effort to win 7-1 over France. Canada will face Sweden in the quarterfinals on Thursday.

Eric O’Dell buried his first goal of the tournament on a breakaway 15:10 into the second period to give the Canadians a 5-0 advantage.

Max Comtois and Damon Severson rounded out the scoring for Canada, which improved to 5-2 in preliminary round play.

Sebastian Ylonen stopped 37-of-44 shots for France and Chris Driedger made 18 saves for Canada.

The Canadians will face Sweden in the quarter-finals on Thursday.

“It is going to be an amazing game,” said Canadian centre Cole Sillinger. “[Sweden] is obviously a very skilled team and they work hard, and they have some good NHL players. We are really looking forward to the challenge on Thursday.”

The semifinals are set for Saturday and the medal games will go Sunday.

The United States secured a quarter-final spot at the ice hockey world championship on the last day of group play Tuesday. It only gets harder from here.

The U.S. knew it would qualify before stepping onto the ice against Norway, thanks to Sweden’s 1-0 win over Latvia earlier in the day. With the pressure off, the U.S. beat the Norwegians 4-2, with two assists from Alex Galchenyuk, to get back into the groove after its loss to the Czech Republic the day before.

That sets up a tricky quarter-final against in-form Switzerland, which beat Germany 4-3 in a shootout to qualify with seven wins from seven games, the only team still unbeaten. Denis Malgin had a goal and an assist for Switzerland and leads the tournament with 12 points, while goaltender Reto Berra made 24 saves and shut out Germany in the shootout.

Two goals in the first period set host nation Finland on course to beat the Czech Republic 3-0 as Jussi Olkinuora made 24 saves for the shutout.

Finland goes on to play Slovakia in the quarter-finals in a repeat of their Olympic semifinal game in February, while the Czech Republic takes on Germany.

A day after a shock win over Canada, Denmark missed out on the quarter-finals with a 7-1 loss to Slovakia as the 18-year-old Olympic tournament MVP Juraj Slafkovsky had a goal and an assist for Slovakia to move to a team-leading nine points.

Slovakia and Denmark finished group play level on points but Slovakia goes through on a better head-to-head record.