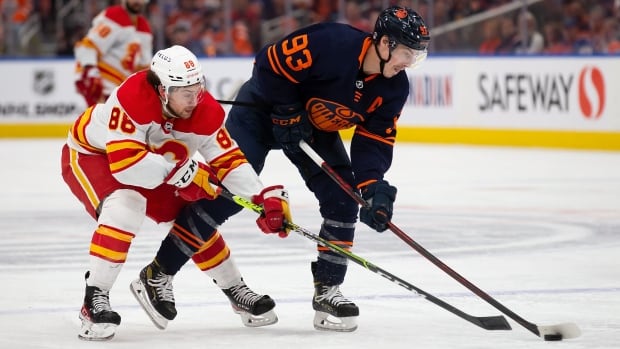 Ryan Nugent-Hopkins scored his second goal of the night with 3:27 left in regulation as the Edmonton Oilers defeated the Calgary Flames 5-3 on Tuesday to take a 3-1 lead in the teams’ second-round playoff series.

Evander Kane, with his NHL-best 11th and 12th of the post-season, and Zach Hyman had the other goals for Edmonton, which got 29 saves from Mike Smith. Leon Draisaitl added three assists.

Connor McDavid also had two assists to give him a league-topping 25 points in 11 playoff outings this spring for the Oilers, who kept their foot on the gas with a third straight victory over their provincial rival.

Elias Lindholm, Mikael Backlund and Rasmus Andersson, on a short-handed goal from his own end in the third period to tie proceedings 3-3, replied for Calgary, which will look to stave off elimination in the first post-season Battle of Alberta in 31 years Thursday at home in Game 5.

After trailing 3-0 after the first period and 3-2 through 40 minutes, Calgary improbably knotted things in the third on an Edmonton power play when Andersson fired a 150-foot clearing attempt from his own end that somehow fooled Smith at 10:56 and stunned Rogers Place.

Calgary defenceman Rasmus Andersson blasts a shot from his defensive end and beats Oilers goalie Mike Smith to tie Game 4 at 3-3 in the third period.

But with the Oilers wobbling, Nugent-Hopkins shovelled home his fourth of the playoffs from Markstrom’s doorstep to send the nervous crowd into a frenzy.

Andersson then took a four-minute penalty for high-sticking with 2:40 left to effectively kill off the game before Kane iced it into an empty net.

Edmonton takes a 3-1 series lead over Calgary in their second round series with a 5-3 victory in Game 4, Ryan Nugent-Hopkins scores twice including the game-winning goal.

Edmonton also held a 2-1 series lead in the first round against the Los Angeles Kings only to play what the Oilers described as their worst performance of the month in a 4-0 loss.

They won’t be thrilled with this Game 4 either, but got the victory for a stranglehold on the series.

Markstrom, who had allowed 14 goals in the series before getting pulled after two periods with Calgary trailing Sunday’s Game 3 by a 4-0 score line, played the puck behind his own net on the first shift, but put it right on Nugent-Hopkins’ stick for him to bury his third inside a deafening arena.

One of three finalists for the Vezina Trophy as the NHL’s top netminder, Markstrom recovered to deny Darnell Nurse on a chance a couple minutes later before Smith was at full stretch on a Johnny Gaudreau one-time chance.

Calgary winger Tyler Toffoli then took a tripping penalty and the Oilers made the visitors pay when Hyman outmuscled a hobbled Chris Tanev — back in the lineup for the first time since Game 6 of the opening round despite a suspected upper-body injury — in tight to bury his fifth goal of the series and seventh of the playoffs at 9:53.

The Flames, who topped the Pacific Division in the regular season, pushed back with a couple of decent shifts, but Kane, who was coming off a natural hat trick in Game 3, made it 3-0 with 66 seconds remaining in the period on a shot that nicked off blue-liner Nikita Zadorov.

Calgary finally showed some life on slick power play in the second with Kane off for slashing, and Lindholm eventually picked the top corner for his fifth at 9:04 after the Oilers twice failed to clear the defensive zone.

Backlund got the Flames within one at 3-2 just 36 seconds later when he stepped past Duncan Keith and fired his fourth past Smith.

Smith made a good stop on a Lindholm power-play chance early in the third before the home side got its second man-advantage with 11 minutes left in regulation.

Markstrom kept his team within striking distance with a terrific pad stop on Draisaitl, who became the first player in NHL history to register three-plus points in four straight playoff games with an assist on the Oilers’ empty-net goal.