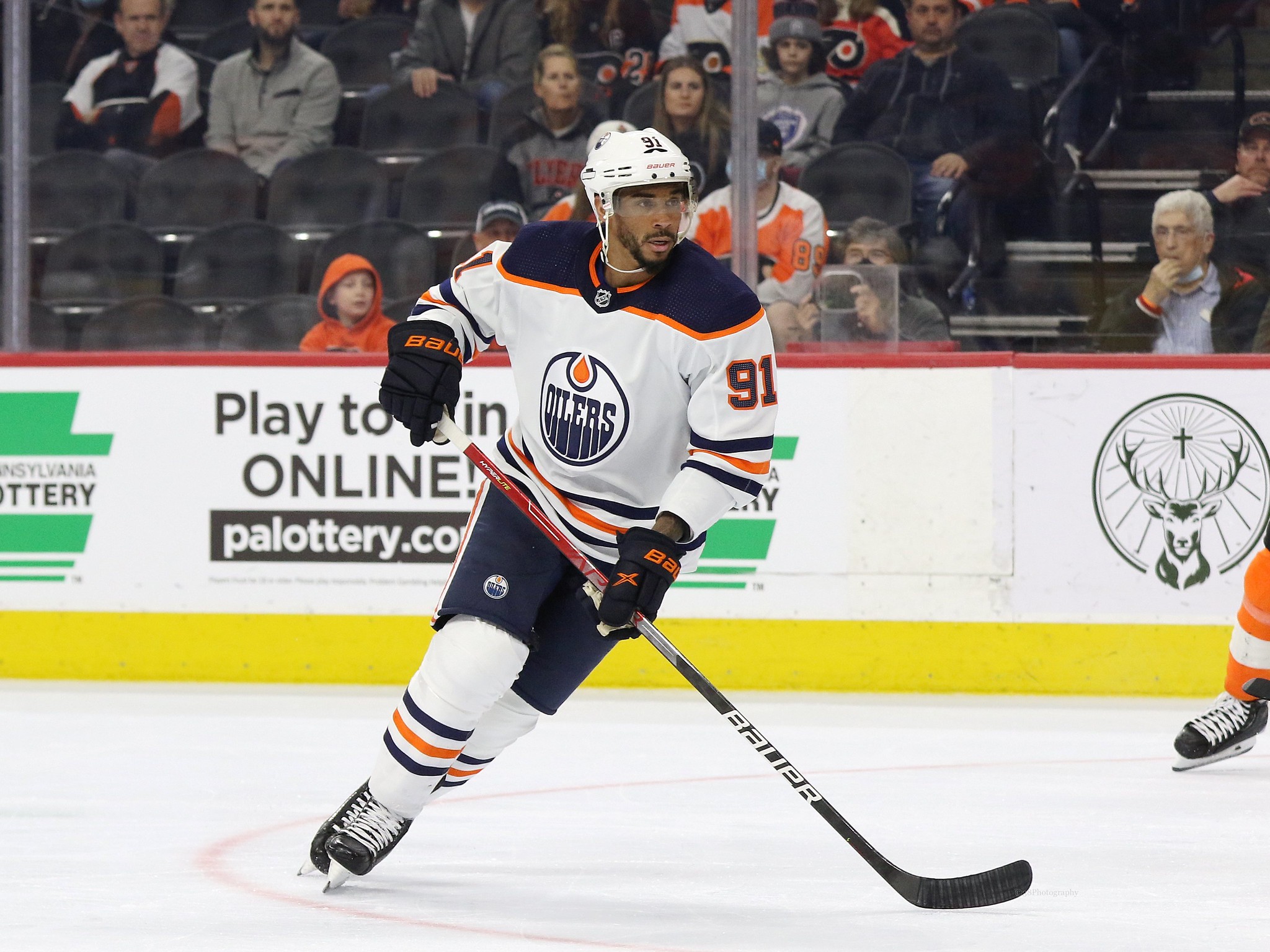 No player has been better than Connor McDavid in these 2022 Stanley Cup Playoffs. That said, perhaps no player has been hotter than Evander Kane. Certainly, no player has scored more goals as he leads the playoffs with 12, two coming in the Game 4 win by the Edmonton Oilers over the Calgary Flames on Tuesday night.

The tandem of McDavid and Kane has been nothing short of magical and the gamble (if you can call it that) Ken Holland made to acquire Kane has paid off in spades. Regardless of how these playoffs end for Edmonton, it’s less of a question now as to whether Holland wants to keep Kane, but more a legitimate question as to how the Oilers do it.

With every goal Kane scores, his pending future contract gets pricier. Deservedly so, as he’s been the hottest free agent signing and best NHL Trade Deadline acquisition this season. He’s also been among the best goal scorers in the NHL since late January. That doesn’t mean a deal is out of the realm of possibility. The Oilers simply need to make a few other moves first.

It will be unfortunate to see the quarterback of Edmonton’s first-unit power play go, but Evan Bouchard’s progression and his advancement while paired with Duncan Keith have made Tyson Barrie expendable. Some will suggest no one will trade for Barrie, but they’re wrong. Someone will as his contract isn’t a concern and there will be at least a half-dozen teams willing to take on a $4.5 million cap hit for only two more seasons.

Barrie still has a lot to offer a team that needs an offensive regular defenseman, and one who can play in the top-four on a decent team. If they need a top-two guy on the man-advantage, Barrie might be their man. It could be Seattle, Ottawa, or a host of other teams lower in the standings that would gladly take him if they didn’t have to give up much in a trade. For a team like Dallas (who might lose John Klingberg) or the Montreal Canadiens (who might move Jeff Petry), Barrie would make for a suitable replacement.

Once the Oilers move Barrie, they can fill in his spot with a prospect making the jump or — because the Oilers are a little light on right-shot defense prospects — add a veteran who is available for cheap. Not everyone will like the idea, but someone like P.K. Subban will be available for almost nothing in free agency and he’s spoken glowingly about this Oilers team while doing commentary for ESPN. He’s just one example, there are others, and the farther the Oilers go, the more players will take notice.

Coming off a 130-ft goal, not everyone will like this suggestion, but Mike Smith has proven enough this season that running with him and backup Stuart Skinner isn’t the worst plan in the world next season. Yes, Smith has as much chance at being awful next year as he does being outstanding, and Skinner hasn’t proven anything at the NHL level, but more money needs to come from somewhere and if Ken Holland goes out and adds a top-level goalie, you can probably kiss Kane goodbye.

The deal here is simply to let Mikko Koskinen walk to Switzerland — where he is rumored to already have worked out a deal — and run with a couple of goaltenders who could be perfectly capable, but there are some questions attached to both.

If the Oilers feel the need, they could sign a third-string goalie on the cheap as backup plan.

I would say trade Zack Kassian, but dump is probably more the suitable term here because a move to get his salary off of the books is going to come in a deal that most fans won’t love. Kassian has an element to his game that many teams will find attractive, but fans in Edmonton often overvalue his consistent impact on this team. Just because he can bring it, doesn’t mean Kassian always does and that’s an issue — one that isn’t worth paying $3.2 million per season for.

Kassian’s minutes have often been reduced in the playoffs making him less effective and, if we’re being honest, Kane has been more engaged physically than Kassian has since Kane joined the team. There’s less of a need for Kassian than there was before Kane’s arrival and the Oilers can afford to trade him. This isn’t to say Edmonton won’t miss No. 44, but a similar physical forward (who might be slightly less skilled) should be available for one-third the price Kassian is.

Moving Barrie’s $4.5 million, Kassian’s $3.2 million, and letting Koskinen’s $4.5 million come off the books frees up $12.2 million for the Oilers. The team will need to replace those players and there will likely be money coming back in the trades but what the Oilers need to shoot for is a way to free up about $8-$9 million. This should be enough to get Kane locked into a deal between $4.5-$6.5 million per season and cover the raises going to Kailer Yamamoto, Jesse Puljujarvi, and Brett Kulak.