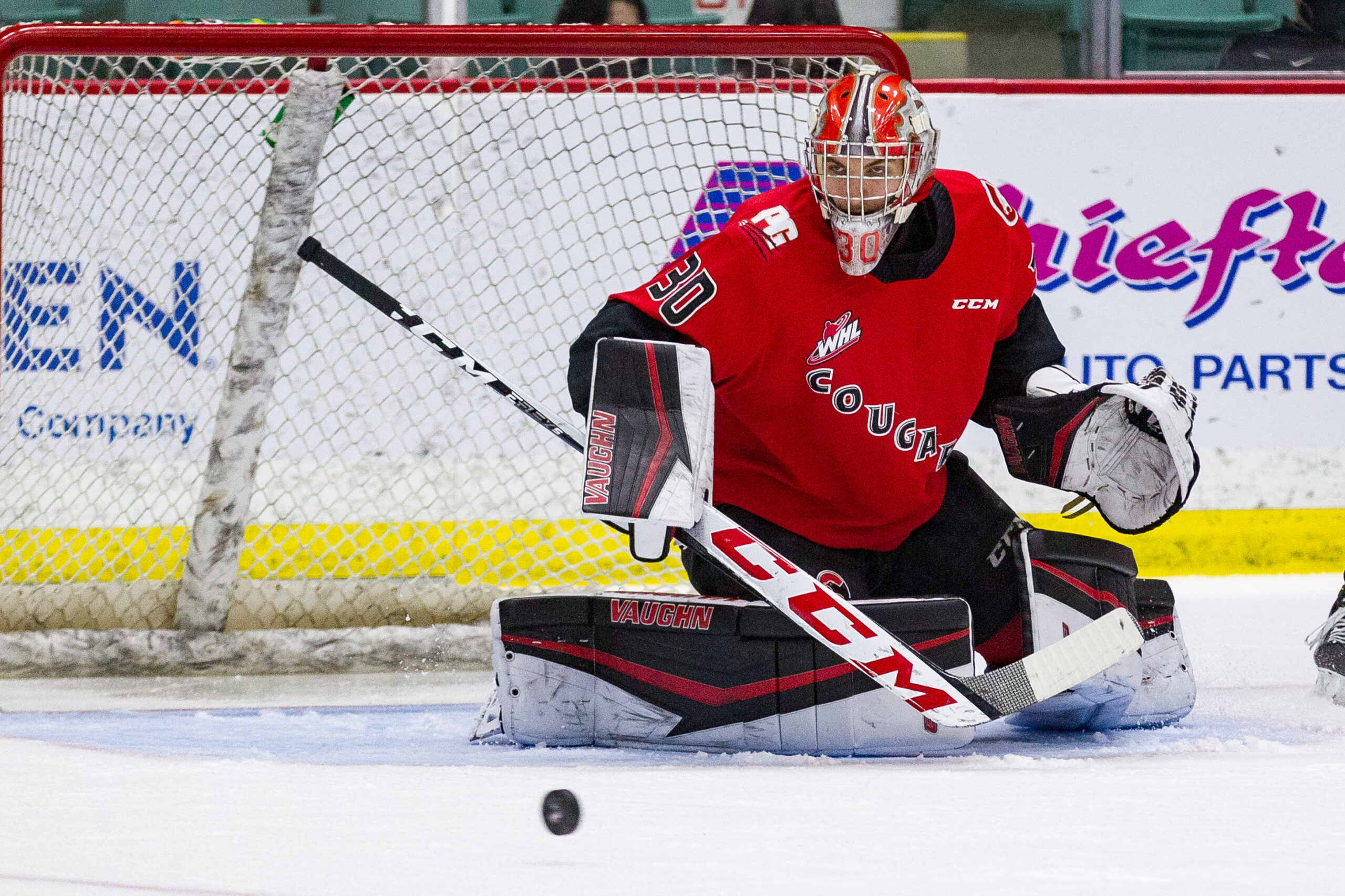 Tyler Brennan is the top-ranked North American goaltender in the 2022 Draft by the NHL’s Central Scouting Department. Though there aren’t any slam-dunk goaltenders in this draft as there have been in recent years (Jesper Wallstedt, Sebastian Cossa, Spencer Knight, etc.), there are still some great goaltending prospects to be found in the middle-to-end of the draft. At 6-foot-4 and 190 pounds, Brennan has the size of a modern-day NHL goalie and has an impressive ability to remain composed in high-pressure situations.

Brennan was promoted to the starting goalie slot early this season as the Prince George Cougars traded their first-string goalie to give Brennan the opportunity to prove to the team, as well as to many NHL clubs, that he has what it takes to be an excellent goaltender. In 39 games this season, Brennan earned a 3.58 goals-against average with a save percentage (SV%) of .899 which were rather disappointing numbers, though they are certainly misleading.

What has Brennan shown to be rated so highly despite a lackluster statistical season?

Brennan obviously has the size that NHL general managers crave, but what really makes him so exciting as a prospect is the way he moves laterally in a very composed and precise manner. He has excellent reflexes and closes off the post well which are both important attributes for taller goaltenders to have.

There are certainly weaknesses to Brennan’s game of course, with the most glaring of these being his difficulty with shots that are closer to his body. These are the situations where he looks the most awkward as he struggles to squeeze his arms in tight to his chest to catch or block these shots that often find their way past him. While he is playing the puck, Brennan’s decision-making and puck-handling skills are rather inconsistent and stands out as an area for growth at the very least.

The reason the Brennan is still so high on many people’s lists is that the areas in which he excels, his instincts and athleticism, are the hardest things to teach to a goaltender. On top of that, the areas in which he has plenty of room to grow, puck-handling and close shots, are skills that can be developed consistently and easily by NHL goalie coaches.

In an interview with Canucks Army, Ian Clark, the goaltending coach for the Vancouver Canucks, went so far as to say that he “can teach a goaltender technique in a weekend” and that he scouts goaltenders for their intangible skills that are “difficult to teach through nurture.” He argues that truly excellent goaltenders are the ones who can break from their structure and come up with creative solutions in high pressure situations. If you were curious about his qualifications, Clark is the goaltending coach who built Jacob Markstrom into a Vezina Trophy finalist and who is doing the same thing with Thatcher Demko. He knows what he’s talking about.

Brennan had an excellent, though brief, playoff run this season in the WHL where he put up a .954 SV% as the goalie on the losing end of a 4-game sweep. Though it is obviously a small sample size, these four games gave Brennan a chance to show what he can really do and what heights he could reach in the right situation.

If Brennan can continue to build on his pre-existing instincts and reflexes and can further develop the technical side of his game, then he will likely have a long and successful NHL career.

I expect that Brennan will be the first goaltender selected in this year’s draft and he will likely be picked in the late second round or early in the third round. If he ends up being selected in the second round, I would expect him to be selected by one of the teams who hold multiple second round picks such as the Seattle Kraken at 60 or the Montreal Canadiens at 61. If those teams pass on him, he won’t stay on the board for long.

“Behind a losing record (8-12-0), a 3.43 goals against average and a .902 save percentage hides a composed goaltender with great edge-work which helps him cover his posts, an active mind and an impressive tendency to divert pucks into areas for his teammates to pick up” – Hadi Kalakeche, Dobber Prospects

“A good pro-size goalie who plays a very calm and relaxed game. He’s got strong legs for lateral crease play and has good butterfly coverage, capable of sealing the ice and the five-hole quickly.” – NHL Central Scouting analysis

Under Construction (Improvements to Make)

It feels most likely to me that Brennan becomes a fringe starting goalie in the NHL, meaning he will either be the 1A or 1B guy in a goaltending tandem rather than the undisputed starter on a good team. If he is drafted to a team with the patience and a good goaltending coaching staff, then Brennan will become even more of a sure thing. Based on his size, flexibility and mental fortitude, I would compare Brennan to Jacob Markstrom of the Calgary Flames, though I don’t expect him to reach quite the same highs that Markstrom has. If he can improve the technical side of his game, then Brennan will have a long professional career.

Logan is a sports writer for the Detroit Red Wings as a member of The Hockey Writers team. He loves reading about statistics and advanced analytics, and discovering how they can enrich his hockey analysis and writing. Logan also writes about more general hockey topics on his blog https://www.crashthecrease.blog.