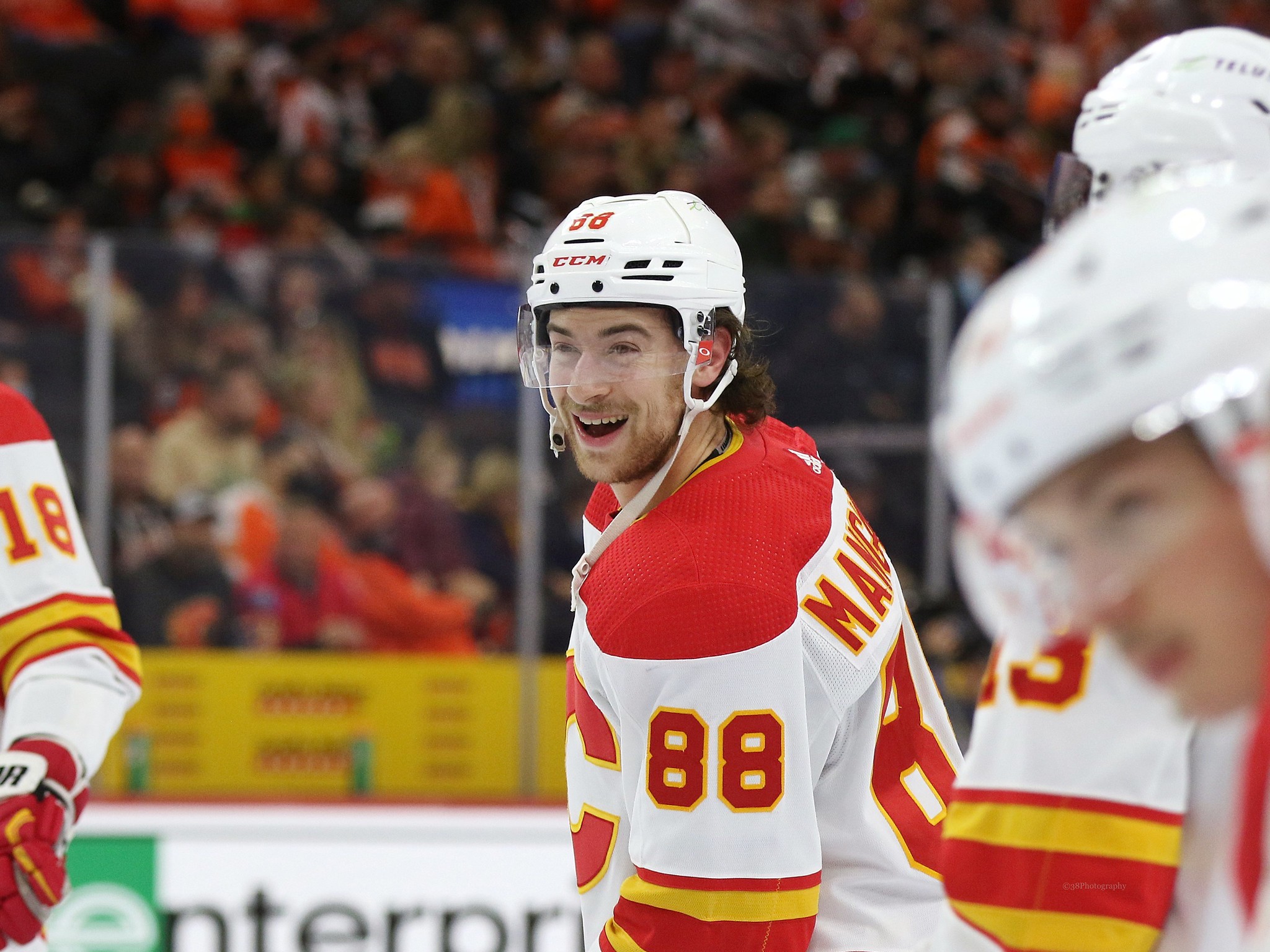 The Philadelphia Flyers have yet to make any major changes, but you have to assume some are coming after the comments made by general manager Chuck Fletcher about a re-tooling.

The Flyers should have their sights set on the Calgary Flames for a number of reasons, including four key players in need of new contracts. This group includes Johnny Gaudreau, Matthew Tkachuk, Andrew Mangiapane, and Oliver Kylington. Gaudreau is the only unrestricted free agent (UFA), so he is the Flames’ top priority before free agency opens.

The Flames will be crunched for cap space if they intend to bring back all their key players for 2022-23. Gaudreau and Tkachuk are set for a major pay raise after they reached 40 goals and 100 points this season, and it would be unwise for the Flames to break up the best line in the NHL in 2021-22.

Together, Gaudreau, Tkachuk, and Elias Lindholm were on the ice for 73 goals for at even strength and 31 against. The line had a 70.19 goals for percentage (GF%), and all three finished in the top three for plus/minus. Any change of personnel to that line could hurt the team significantly and make it really hard to get back to the second round of the playoffs next season.

Two players the Flames would miss but could replace a lot easier than Gaudreau and Tkachuk are Mangiapane and Kylington. The team would be able to get a good return for either, considering they are restricted free agents (RFAs) and the seasons they had. After acquiring Tyler Toffoli before the trade deadline and watching Dillon Dube progress, the choice may be to deal Mangiapane since teams are always looking for someone who can put the puck in the back of the net.

Gaudreau, more than Tkachuk, was rumored to have the Flyers in mind as he is still without a contract as we get closer to free agency. He was born about 40 miles from Philadelphia speculation has suggested for years that he may want to play closer to home. Despite all of that, he said, “It’s all I’ve known for the past 11 years, and it’s kind of a big decision here, and I’m just going to try to figure out what’s best for me and my family and go from there. But Calgary is a special place for me, and I do really, really love it here.”

The Flyers do have a fighting chance if Gaudreau makes it to free agency, but they will have to move money out before breaking the bank and adding high-end offensive skills. Fletcher stated that is a must as the Flyers finished 31st in goals per game (2.56) and 32nd in power-play percentage (12.6%). It should help a bit to have key players back in the lineup in Philadelphia for next season, but they are going to need a lot more help to turn things around for good. With not a ton of money to work with and other areas to improve, it will be a task for Fletcher to get the job done.

As for Tkachuk, he is going to get paid as well and require assets to be moved by the Flames. He’s been connected to the St. Louis Blues, considering he is from there and his father played there. But, like Gaudreau, Tkachuk stated he’d be very open to a long-term deal with the Flames.

With Claude Giroux now gone, the Flyers have to start looking ahead. The high-end offensive talent that seems available now may not be once free agency opens. Plus, the market always results in overpayments for players that look bad for almost every team down the line. That is why the Flyers must explore the trade market.

I’ve discussed the Flames’ lack of cap space to sign all of their key free agents, not to mention bringing back or more depth players to fill the roster. Mangiapane is set for a big salary increase when his two-year, $4.85 million contract ends this offseason. He and the Flames agreed on a bridge deal after he scored 17 goals and 32 points in 68 games during the 2019-20 season. It was a nine-goal improvement from his previous season, and over the past two seasons, he has improved exponentially.

This season, Mangiapane scored 35 goals, 55 points, was a plus-20 and had eight power-play goals. He scored two shorthanded goals and three shorthanded points, while 23 of his 35 goals came on the road. The Flyers could use everything he brings at what should be half the cost or less than what Gaudreau and Tkachuk are going to be paid.

Of course, Mangiapane isn’t the player either of the two Flames stars is, but he is young, entering his prime, and will surely help improve on the 31st-ranked goals per game and 32nd ranked power play. We could easily see him fit in the top-six in Philadelphia, especially since he can play both wings, and James van Riemsdyk will be gone before next season or by the end of 2022-23. Mangiapane would receive more of an opportunity since the Flyers don’t have one line they rely on, so he has the potential to top his goal output as he continues to get better.

Related: 2 Veterans the Flyers Need to Keep This Offseason

A trade would likely involve a pick/prospect combination heading back to the Flames, but that would be worth it for the Flyers and give a good return for a former sixth-round pick to a team in need of that extra cap space.