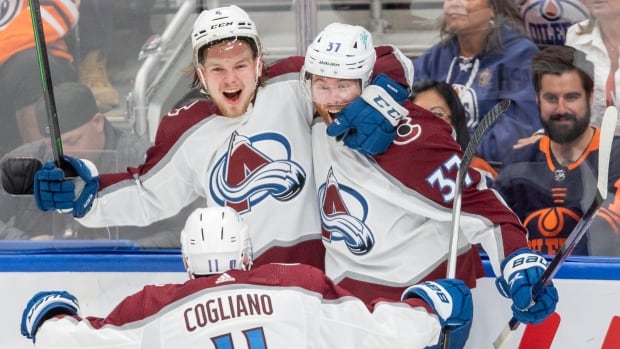 J.T. Compher scored with 7:18 left in regulation as the Colorado Avalanche defeated the Edmonton Oilers 4-2 on Saturday to take a 3-0 stranglehold on the NHL’s Western Conference final.

After the Avalanche killed off his tripping penalty midway through the third period, the centre rejoined the play, fought off Oilers defenceman Evan Bouchard and beat Mike Smith between the pads for his fifth goal of the playoffs.

Valeri Nichushkin, with two, and Mikko Rantanen, into an empty net, had the other goals for Colorado. Devon Toews added two assists.

Pavel Francouz, who started a second straight game after picking up a 4-0 shutout Thursday in place of injured No. 1 goaltender Darcy Kuemper, stopped 27 shots.

Colorado is now one win from the franchise’s first Stanley Cup Final berth since winning its second title in 2001.

Connor McDavid and Ryan McLeod replied for Edmonton, which will look to extend its season Monday in Game 4 back at Rogers Arena. Smith made 39 saves.

Only four NHL teams have ever come back from a 3-0 deficit to win a seven-game series. The Los Angeles Kings were the last to accomplish the feat in the first round of the 2014 playoffs against the San Jose Sharks.

Down 2-1 entering the final period and with their season on the line, McLeod scored his third at 7:34 when took a pass from Brett Kulak, moved into the Colorado zone and fired a shot from distance that fooled Francouz.

Edmonton got that power play in the third, with the Colorado netminder redeeming himself on a terrific McDavid opportunity and Bouchard hit the post seconds before Compher pushed the visitors in front for a second time on a terrific individual effort.

Smith then made a huge stop on Nichushkin to keep his team in it, but the Oilers couldn’t find a way through before Rantanen iced it with his fourth into the empty net as Edmonton now faces a monumental task in its first conference final since 2006.

Tied 1-1 after the first, both Francouz and Smith were called on to make big saves early in the second before the Avalanche took their first lead.

Following an offensive zone faceoff win, Toews’ shot hit Nathan MacKinnon in front and fell kindly for Nichushkin, who buried his second of the night and fifth of the playoffs at 4:38.

Smith kept the Oilers within one as the period wore on, stopping Rantanen off the rush and Cale Makar from the slot before denying Nichushkin of his first NHL hat trick with a desperation save.

In desperate need of a spark, Oilers head coach Jay Woodcroft loaded up his top line with McDavid, Leon Draisaitl and Evander Kane to start the third period.

Edmonton killed off a Draisaitl penalty early in the third period as the 40-year-old Smith continued to battle before McLeod tied it.

Woodcroft, who was without top-six winger Kailer Yamamoto after he took a hit from Colorado captain Gabriel Landeskog in Game 2, once again shook up his lineup heading into Saturday, promoting bruising winger Zack Kassian to the top unit alongside McDavid and Kane, and going with 11 forwards and seven defencemen.

McDavid opened the scoring just 38 seconds after the opening faceoff following some hard work from Zach Hyman in front of Colorado’s bench before moving in on Francouz and snapping his ninth goal of the playoffs — and NHL-leading 30th point in 15 games — to send a frothing Rogers Place into a frenzy.

McDavid also became the sixth player in franchise history to post 30 points the post-season, and the first in 32 years.

Kane delivered a dangerous hit from behind on Nazem Kadri on the next shift, sending the Colorado centre careening into the boards.

The Oilers forward was assessed a five-minute major, but avoided a game misconduct. Kadri, who had three assists for Colorado in Game 3, went straight to the locker room and didn’t return.

Smith stopped all nine Colorado’s shots on the ensuing man advantage, including terrific saves on MacKinnon and Landeskog.

The Edmonton netminder then made a huge double-pad stack off Landeskog on another penalty kill as the Oilers were short-handed for seven of the game’s first 12 minutes.

The Avalanche didn’t have a shot on goal at even strength in the period, but tied it with 3:48 left when Nichushkin’s pass in front went off the stick of Oilers defenceman Darnell Nurse and beat a surprised Smith short side.

Edmonton came close to going back in front late in the period, but Francouz got a piece of a Kassian effort in tight before clearing a loose puck off his goal line.

‘I would have done the same thing:’ Bowness OK with being Jets’ second choice
Sea Dogs defeat Bulldogs to capture 2nd Memorial Cup in franchise’s 17-year history
NHL draft prospect understands pressure-packed situations in the crease, off the ice
Lifting the Stanley Cup was ‘everything I dreamed of and more,’ says Alex Newhook
Lightning acquire Myers, Mismash