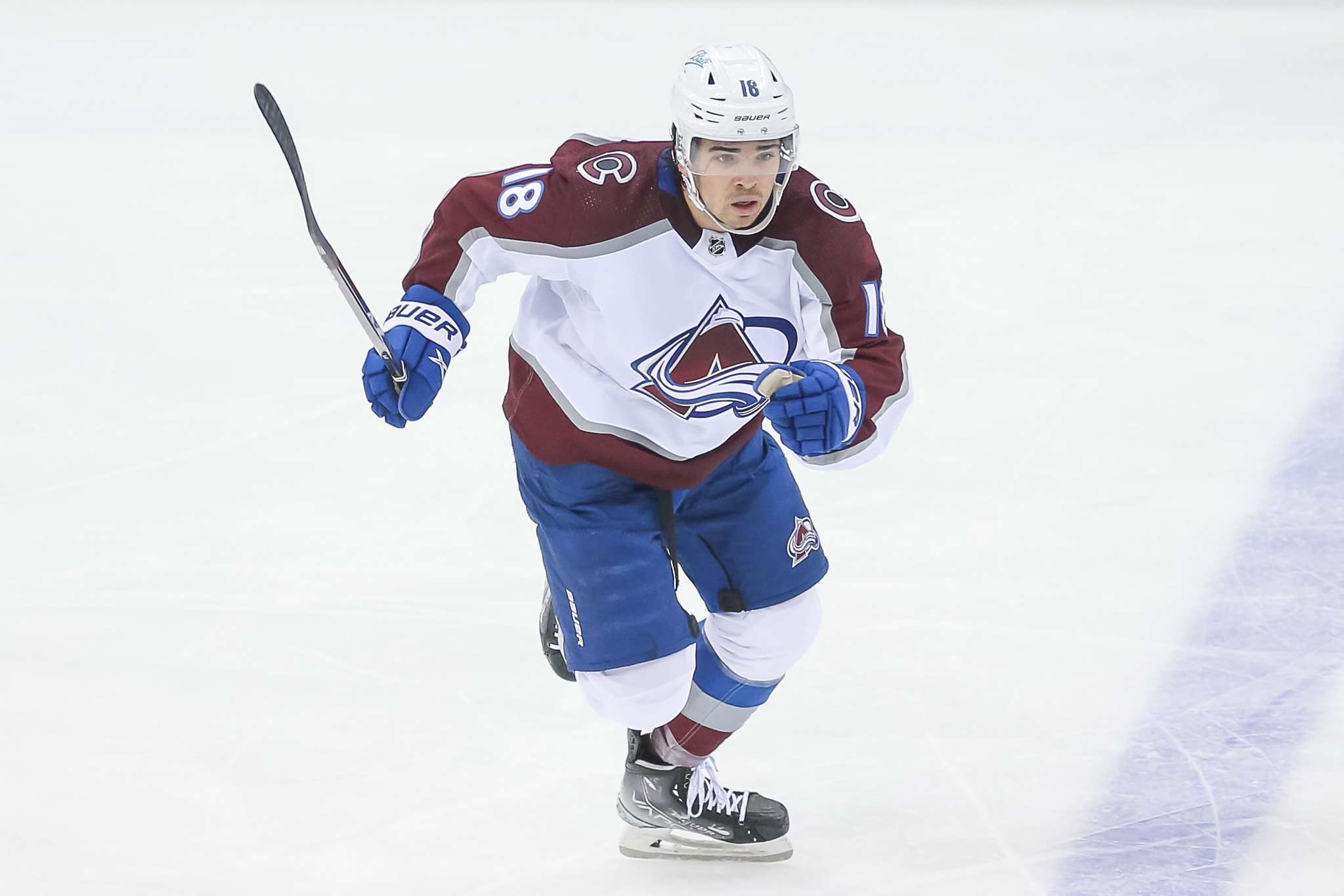 In the opening stanza of Game 3 of the 2022 Western Conference Final, the Colorado Avalanche’s Nazem Kadri was on the receiving end of a dangerous hit, the ensuing headfirst impact eliminating him from the rest of the series at minimum. For a player who was producing at an elite level and finally looked to have shed the hothead label, it’s a cruel twist of karmic retribution. Although the Avalanche are on the precipice of sweeping the Edmonton Oilers, it’s a significant blow for a team already without the services of Samuel Girard.

Fortunately for the Avalanche, their offensive firepower is second to none, and they boast a number of candidates capable of stepping up in Kadri’s stead. Utility forward J.T. Compher (fourth on the team with five goals) and two-way force Valeri Nichushkin (nine points) are two such individuals, but there is only one skater on the roster who could replicate the skills Kadri brings to the table – Alex Newhook. Let’s dig into why the rookie forward is the most suitable candidate for the daunting task of replacing Kadri’s impact.

While highly-touted forward prospects are sometimes handed an NHL roster spot simply out of necessity, Newhook had the misfortune of being drafted by an ascending Stanley Cup contender. As a result, his deployment has been inconsistent and limited at times during his brief Avalanche tenure, but he’s shown enough to warrant promotion in the lineup. While he didn’t make me look like a genius for my preseason predictions, he still delivered a solid freshman campaign.

After being sent to the American Hockey League (AHL) for more seasoning, Newhook demonstrated the flashes of skill that made him a mid-first-round pick in the 2019 Draft. He tallied 11 points (four goals, seven assists) in 10 games, and earned a prompt return to the Avalanche. Head coach Jared Bednar primarily deployed him as a top-nine option during the regular season at 5v5, as he played the ninth-highest average ice-time (11:51) among the team’s forwards. He rarely was featured on the power play, only skating an average of 1:22 with the man-advantage per night. Even so, he looked at home in Colorado’s high-flying system and produced at a relatively high rate for a first-year player, compiling 13 goals and 20 assists in 71 games.

If you assume a top-nine forward to be in the vicinity of ranking at least 288th (nine forwards times 32 teams), you can make the case that Newhook outperformed his 5v5 deployment. In his extremely small sample of playoff games, he ranks 39th in 5v5 points per-60 and 11th in assists per-60. In terms of shot- and chance-share, the Avalanche have maintained a neutral ledger when he takes the ice. They account for 50% of shot attempts (CF%) and scoring chances (SCF%), but only 46.2% of expected goals (xGF%) and 40% of high-danger chances (HDCF%). The latter two marks are concerning, but the presence of the defensively responsible pair of Artturi Lehkonen and Gabriel Landeskog should mitigate those worries.

For what it’s worth, he hovered around break-even on each of those metrics (except for HDCF%) during the regular season across a much larger sample of games. Using him more frequently is a gamble, but the Avalanche have a three-game buffer to work with, and can always drop him down if things don’t click as well as hoped. However, judging by tracking data compiled by Corey Sznajder, Newhook is capable of emulating Kadri’s on-ice contributions.

Although Newhook wasn’t tasked with a heavy workload in terms of neutral zone transition during the regular season, he was successful at entering the offensive zone with possession. He completed 16.1 controlled zone entries per-60 at 5v5 (about average), and maintained control of the puck on 63.9% of his attempts, nearly cracking the top five among Avalanche forwards. He turned those entries into chances at a decent rate, converting over a third of his total entries into scoring opportunities. His 3.69 chance-creating entries per-60 ranked fifth among Avalanche forwards, but fourth if you exclude Kiefer Sherwood who only played 11 NHL games.

Newhook also ranked second on the team in shots off of high-danger passes per-60 (cross-seam and from behind the net), illustrating his keen awareness in the offensive zone. There is no guarantee that he maintains his play and production in a more demanding role while being defended by some of the NHL’s best, but it’s worth a try. If either of the Conference Finals go the distance, Kadri might have enough time to recover in time for the Stanley Cup Final, however unlikely. If not, Newhook’s player profile becomes more integral to Colorado’s offensive game plan. As this season suggests, Kadri’s impact is impossible to replace in its entirety.

There’s no overstating the obvious, Kadri’s indefinite absence means that as long as the Avalanche stay in the playoffs, they will have to overcome a gaping hole down the middle. After an unexpected breakout season in which he tallied career-highs in assists (59) and points (87), the 31-year-old center maintained his prolific form well into the depths of these Stanley Cup Playoffs. He ranks 15th among all skaters in goals (six), eighth in primary assists (seven), and 11th in total points (14). His steady production is the byproduct of getting into dangerous scoring areas by excelling at transitioning the puck.

On top of his individual scoring exploits, Kadri’s line has provided the Avalanche’s top trio led by Nathan MacKinnon with ample secondary support. Among forward lines to have played at least 30 minutes together at 5v5, Kadri, Landeskog, and Lehkonen earned a 65.3% share of xGF% (10th), 62.8% of CF% (11th), and outscored opponents 5-1 in 53 minutes of game time. Few teams in the league can match the Avalanche’s firepower, as it’s been a key factor in their dominant showings over their Western Conference foes.

It’s a shame that in the year Kadri appeared to have taken the long-awaited step to becoming an undeniable star, he might not get to compete for the Stanley Cup championship he so desires. He’s undoubtedly earned himself an extra million or two on his next contract with his determined postseason showing but that’s of little solace when the prize of eternal glory is at stake.

Second-Line Center Is There for Newhook’s Taking

It may be unwise to throw a rookie into such a prominent role so deep into his first postseason, but Newhook is the only center on the roster who can replicate Kadri’s play style. The Avalanche’s commanding lead in the series provides room for experimentation, and they shouldn’t shy away from challenging him as a result. Any team that makes a long playoff run needs unsung heroes to step up and support the superstar talent driving the bus. Why can’t that be Newhook?

Data courtesy of AllThreeZones, Hockey Reference, Natural Stat Trick, and the NHL. Statistics are accurate as of June 5th.

Marko is an aspiring sportswriter with a passion for crafting stories while using a combination of the eye-test and (shudder) analytics, which is complemented by an academic background in criminology and political science.

When not covering the Colorado Avalanche and Pittsburgh Penguins for The Hockey Writers, he can also be found pouring countless hours into various sports video games franchises, indulging in science fiction novels, and taking long runs around his neighbourhood.

Marko can be reached through his personal blog at unexpectedgoals.ca, and you can yell at him by following him on Twitter and other social media seen under articles like this one.