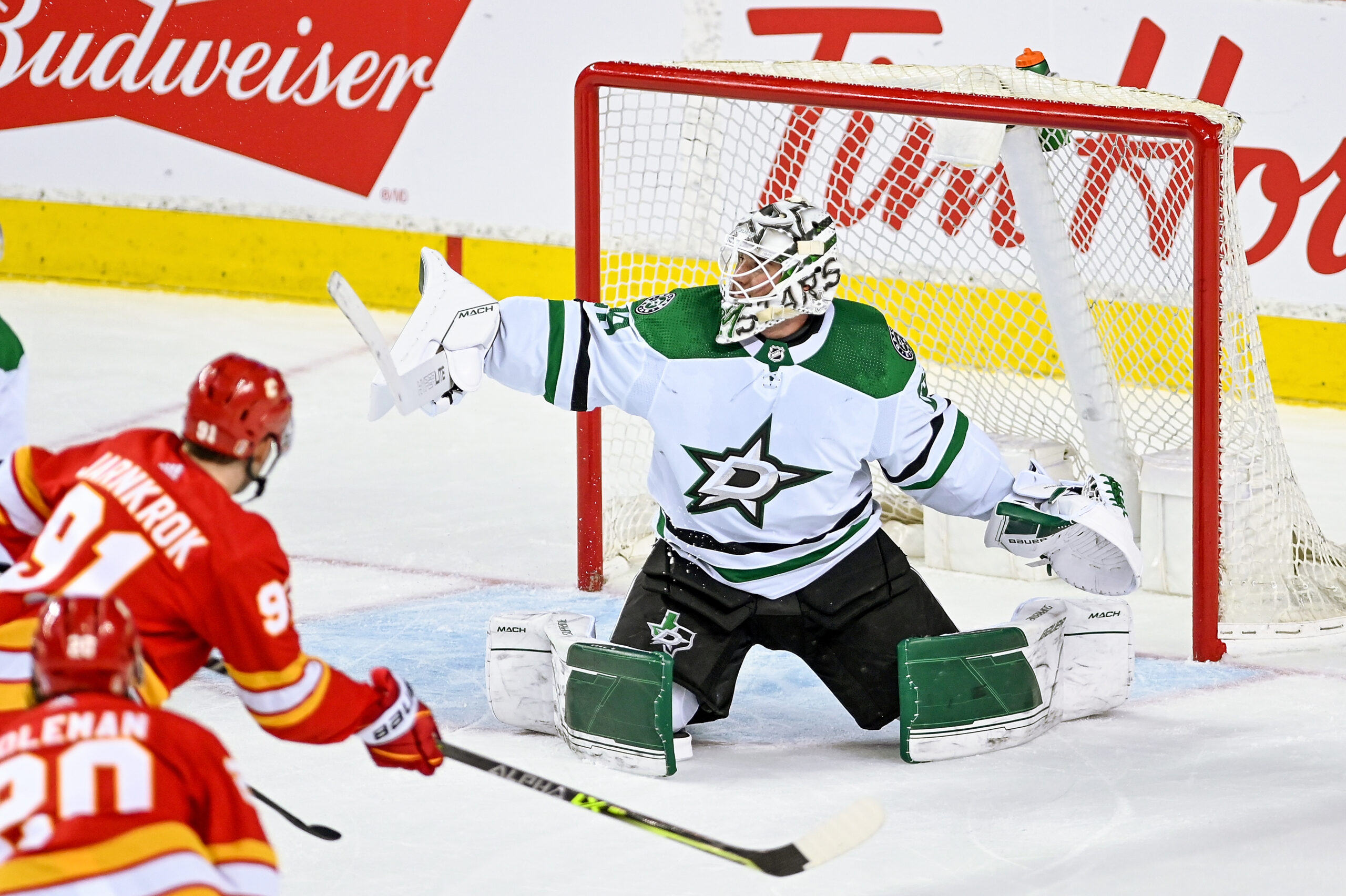 The Stanley Cup playoffs are always full of excitement and surprises, and as the best players tend to lead their teams deep into playoffs, the supporting cast and unexpected players are the ones who help push the team to the next level. We are going to look at five players who had breakout performances during these playoffs and how their careers can only go up from here.

The one and only reason the Dallas Stars even made it to Game 7 of the first round was because of Jake Oettinger. He played incredibly and was the best goaltender in Round 1. He stepped up and shut the door against the sixth-ranked offense in the NHL and allowed just 13 goals on 285 shots, good for a .954 save percentage (SV%). His goals-against average (GAA) was also 1.81 and he had a 12 goals saved above average (GSAA) rating which is incredible for playing just seven games.

The Stars will have the fewest goals against per game in this postseason by a wide margin. Keep in mind they did only play one round, but it was all Oettinger. It was a huge step forward from the regular season where he finished with a .914 SV% and the hope is that this is a glimpse of things to come for the Stars as they will need his elite play to continue if they want to compete in a very tough Central Division next season.

The first member of the “Kid Line” to appear from the New York Rangers as a player who broke out is Filip Chytil. He elevated his game alongside the unlikely young line and was a big reason why the Rangers advanced to the Eastern Conference Final ahead of schedule.

Averaging just 13:24 of ice time during the playoffs, it didn’t stop Chytil from doing something special when he was on the ice. He had a stretch of three games in which he scored five goals and scored two in Game 1 of the Eastern Conference Final against the Tampa Bay Lightning. He scored eight goals and 22 points in 67 games during the regular season but scored seven goals and nine points in 20 playoff games. This is the type of impact the Rangers were hoping for when they drafted him in the first round in 2017.

Chytil now has the fifth-most playoff goals by a Rangers player age 22 or younger and looks to have made things more clear for the team as he has answered some of the questions heading into this offseason and free agency. If he can sustain the success and play with even better players in a larger role, it will free up spots and money for the Rangers to work with moving forward (from “Filip Chytil’s breakout postseason answering Rangers’ second-center question”, New York Post, June 2, 2022).

Even though J.T. Compher hasn’t had a huge jump in points per game from the regular season, he was able to step up in a big way when Nazem Kadri was injured and even before that. He played just nine minutes in Game 6 versus the St. Louis Blues but scored two goals. He followed that performance up with a two-goal game in the first meeting between the Colorado Avalanche and the Edmonton Oilers playing just under 13 minutes.

Compher’s goals came at timely moments and he did so in the bottom-six, but when Kadri missed some games, he easily stepped into his spot and provided the Avalanche with a solid second-line replacement, almost as if nothing had changed. Seeing as how stacked the Avalanche are and the impact some of the top players have had, Compher’s contributions may be overlooked, but shouldn’t be. The team may need him to be their second-line center moving forward as they will likely lose Kadri to free agency in the offseason.

Anthony Cirelli’s name is on this list not for his offensive contributions and elevated game, but for the strides he’s made defensively. It was well known that he was a strong defensive player, but he has taken that to an entirely new level with the shutdown play he has provided the Lightning this postseason.

Into the third round of the playoffs, he had successfully shut down two huge offensive threats in the Toronto Maple Leafs and Florida Panthers while still doing great work against the offensive skill of the Rangers. Cirelli is the centerpiece of the Lightning’s new shutdown line which also includes Brandon Hagel and Alex Killorn. They have only given up one five-on-five goal against in over 100 minutes of ice time together and before the Avalanche did some damage in the shot department on the Lightning as a whole, the team’s shutdown line had a plus-36 shot differential in these playoffs. The line’s xGF% (expected goals for percentage) is nearly 60 percent and the Corsi, Fenwick, and shots for percentage are all above 55 percent which is very good. Signed to a great deal for what he contributes, Cirelli will once again be the Lightning’s second-line center next season and compete for the Selke Trophy once again.

It was the first playoffs for Alexis Lafreniere as he, like Chytil, elevated his game on the third line to help the Rangers advance deep into the postseason. He got on the scoresheet more with assists, as Chytil took the spotlight with his goals. That didn’t stop Lafreniere from enjoying every second he was on the ice, though. He has been described as having an under-the-radar pesky presence and Ryan Strome was quoted as saying, “Laffy has been really good. He’s elevated his game. I think he competes really hard. He obviously has special ability, which is coming out lately in a big way” (from “Rangers’ Alexis Lafreniere reveling in first playoffs as he ‘elevates’ game”, New York Post, May 28, 2022).

There are much higher expectations for Lafreniere, and since he’s been stuck behind a strong top-six in New York, his development at the NHL level has been a little slower than anticipated. With a strong showing in the playoffs, he proved that he could be effective and impactful in games even more so than he’s been playing anywhere else in the lineup. He will inevitably be elevated to a higher spot sooner than later as he gets some seasons under his belt. Remember, he’s only 20 years old and many prospects don’t even get a chance to play in the NHL at that age, never mind, be the best version of themselves.

It’s good to see young players taking their game to the next level in the playoffs, but what’s more important is how each individual will build on the success they had.

Anyone else you think may have had a breakout playoffs? Let me know in the comments.