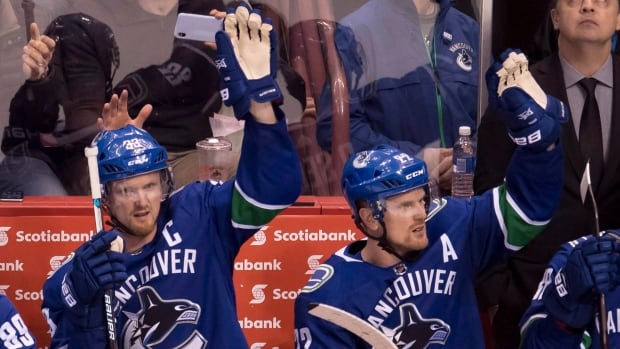 The Sedins and Luongo were in their first year of eligibility, while Alfredsson has waited since 2017 to get the call.

He won the Hart Trophy as NHL MVP and the Art Ross Trophy as its leading scorer in 2009-10. He added 23 goals and 78 points in 105 playoff games, including Vancouver’s run to the 2011 Stanley Cup final.

If Henrik was the passer on what was one of hockey’s most dangerous lines, Daniel Sedin was the trigger man.

Daniel Sedin won the Ted Lindsay Award as the most outstanding player in the league as voted by NHL Players’ Association members in 2010-11 to go along with the Art Ross Trophy. He added 71 points in 102 playoff games.

WATCH | Daniel and Henrik Sedin have numbers retired in Vancouver:

Daniel and Henrik Sedin have numbers retired in Vancouver

The Swedish superstars were honoured on Wednesday in an hour-long pregame ceremony.

Luongo started his career with the New York Islanders and wrapped up with the Florida Panthers.

His best years, however, were on West Coast.

When he retired, Luongo ranked third in NHL history with 489 wins, a number that’s since been surpassed by Marc-Andre Fleury.

Luongo twice won 40 games with the Canucks, including an eye-popping 47 victories in 2006-07, and made at least 70 appearances in four straight seasons.

A finalist for the Vezina Trophy as the league’s top netminder on three occasions, Luongo finished behind only Sidney Crosby in Hart Trophy voting following that 47-win campaign.

The Montreal native won two Olympic gold medals, leading Canada to the top of the podium in Vancouver in 2010 before backing up Carey Price in Sochi, Russia, four years later.

The former Senators captain and face of franchise won the Calder Trophy as the NHL’s rookie of the year in 1996, and added 100 points in 124 playoff contests.

Sallinen played 16 seasons with the Finnish women’s national team, winning Olympic bronze in both 1998 and 2018.

She added a silver at the 2019 world championships to go along with six bronze. In all, the 48-year-old scored 63 goals and added 59 assists in 81 games for her country.

Carnegie, who died in March 2012 at age 92, has often been mentioned as the best Black hockey player to never play in the NHL.

Following a long career in senior hockey, he founded Future Aces, one of Canada’s first hockey schools in 1955.

The hall’s 2020 edition was finally inducted last November after a delay because of the COVID-19 pandemic. Officials decided against naming a class of 2021.

The selection committee met in-person this year for the first time since 2019.