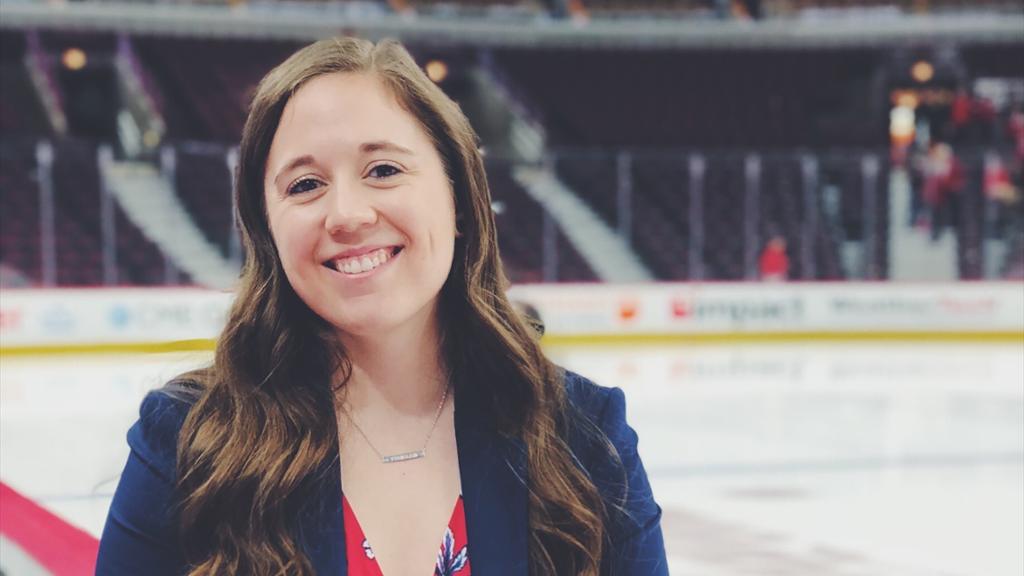 Emily Engel-Natzke was promoted to video coordinator by the Washington Capitals on Thursday, making her the first woman to be a full-time coach in the NHL.

Engel-Natzke worked the past two seasons as video coach with the Capitals’ American Hockey League affiliate in Hershey, where she was the organization’s first woman coach.

“It’s really exciting,” Engel-Natzke said. “It’s kind of surreal, I guess. I’ve never kind of really looked at myself in that lens, and I think if you may have asked me a week ago, I wouldn’t have wanted it to be a big deal. But with everything that’s going on kind of geopolitically, I think I’m more, so just honored to be the first.

“Hopefully that just opens the door even further for people who want to get into this job and this profession.”

Capitals coach Peter Laviolette acknowledged the magnitude of Engel-Natzke being the first woman in her role in the NHL, but said it was also the next natural step in her progression as a video coach.

“Obviously it’s important and it’s significant,” Laviolette said. “But as we looked at this, we feel like we hired really a qualified person that we brought into the organization two years ago and came in and did an outstanding job. And that’s what development is all about. For me, we got the best person, and that’s the most important thing.”

Engel-Natzke replaces Jared Elenberger, who left to pursue other opportunities after being the Capitals video coordinator the past two seasons. The 31-year-old native of Fort Collins, Colorado, got her start in 2013, when she was studying film and playing club hockey at the University of Colorado, and her coach, Kristen Wright, asked her to shoot video and serve as video coach for the United States women’s team at the World University Winter Games in Trentino, Italy.

That led to an opportunity working with the women’s basketball team at the University of Wisconsin in 2014-15, followed by two seasons with the Wisconsin’s men’s and women’s hockey teams. Engel-Natzke shifted exclusively to the men’s hockey team in 2017 after coach Tony Granato convinced the university to create a full-time position for a video coach.

She credits Granato, a former NHL player and coach, with helping her realize that aspiring to work in the NHL wasn’t farfetched.

“He really kind of pushed me to make it a goal and helped me really work towards it,” Engel-Natzke said. “He was really key in helping me learn and grow and push to be an NHL-style video coach with a heavy workload, long hours. Once I started working with him, I felt like that dream could be a reality.”

The next step was joining Hershey in 2020 and coordinating the past two seasons with Capitals assistant/video coach Brett Leonhardt. Laviolette said Engel-Natzke received “a strong recommendation” from Granato, his former teammate on the 1988 U.S. Olympic team and with the New York Rangers, about her work ethic and knowledge of the game in 2020.

Laviolette experienced it firsthand when Engel-Natzke was called upon to assist the Capitals video staff.

“I think there was a point where she came up and helped when we were shorthanded a bit,” Laviolette said. “But then you go backwards, and you talk to the staff down in Hershey, Scott Allen and the coaches. And as we are looking to fill an opportunity, there’s also the chance to get an up-close kind of feel for what’s going on with that person inside of that role and how they go about their business, and just a really, really strong recommendation from all the people down in Hershey, kind of the same way Tony did with how well-prepared she was, how much of a hard worker, willing to learn, dedicated.”

Engel-Natzke joins a growing list of women hired to roles by NHL teams. Between Jan. 24 and Feb. 10, the Vancouver Canucks named Emilie Castonguay and Cammi Granato as assistant general managers. Meghan Duggan was promoted by the New Jersey Devils to director of player development on May 31, Marie-Philip Poulin was named a player development coach by the Montreal Canadiens on June 7.

Jessica Campbell was named a coach for the Rangers’ 2022 development camp June 14 and Meghan Hunter was named assistant general manager, hockey operations of the Chicago Blackhawks on June 22.

“And I know there’s a lot of other women who can fill other roles,” Engel-Natzke said. “There’s a lot of really great coaches in international play, NCAA. Hopefully the door just keeps opening a little bit more and I hope in a couple years it’s not as big of a deal, it’s kind of just another hire. But I think it’s been really encouraging that you’re seeing women in different roles, whether it’s in coaching, whether it’s in management, athletic training and equipment management, so it’s really encouraging and really promising, and hopefully younger women see that and it can become a goal for them, too.”