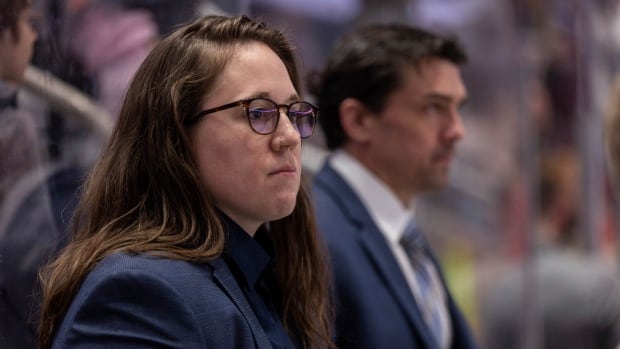 Emily Engel-Natzke wanted to make the National Hockey League as a video coach.

When the Washington Capitals named Engel-Natzke video coordinator on Thursday, she not only accomplished that goal, but she also became the first woman to hold a full-time position on an NHL coaching staff.

“I’ve never kind of really looked at myself in that lens, and I think if you may have asked me a week ago, I wouldn’t have wanted it to be a big deal,” Engel-Natzke said. “But with everything that’s going on kind of geopolitically, I think I’m more so just honoured to be, I guess, the first. Hopefully that just opens the door even further for people who want to get into this job and this profession.”

It’s the latest in a series of promotions for women around the NHL in recent months after decades of slow progress in diversifying the sport in the coaching and executive ranks.

“This was earned and deserved,” coach Peter Laviolette said. “We feel like we hired really a qualified person that we brought into the organization two years ago and came in and did an outstanding job, and that’s what development is all about. For me, we got the best person and that’s the most important thing.”

Engel-Natzke’s path to Washington began in earnest in 2017 when she began working as the full-time video coach for University of Wisconsin men’s hockey coach Tony Granato following several years assisting with the men’s and women’s programs there.

“When she first came on, one of the questions I asked her is: ‘What do you want to do with this? Is this a full-time gig for you? Is it something you want to try to pursue at a different level?”‘ Granato said. “And she said, ‘Yep, I want to figure out how I can be the first woman to make it to the NHL on the video side of things.”‘

Engel-Natzke, 31, came from the Hershey Bears, Washington’s top minor league affiliate, where she was the first woman to be a full-time member of a coaching staff in the American Hockey League.

After playing two seasons of Division III hockey at Adrian College, Engel-Natzke got a heavy workload at Wisconsin to prepare her for the pros and then took another step in Hershey, presenting 5-on-5 scouting reports of opponents and becoming more involved in the day-to-day operation of the team.

“She’s grown a lot in her position, just to learn the professional side of the game,” Bears VP of hockey operations Bryan Helmer said. “Emily is a very hard worker that wants to learn, and in the two years she was here, she did that. She was always wanting to do more than to contribute to the team in any which way she can to make us succeed.”

After learning about her from longtime Capitals video coach Brett Leonhardt, Helmer, like Laviolette, said Hershey hired Engel-Natzke based off experience and her interview. “You take her name off her resume and put any name, she was qualified,” he said.

Engel-Natzke’s hire comes on the heels of the Chicago Blackhawks promoting Meghan Hunter to assistant general manager and the New Jersey Devils promoting Meghan Duggan to director of player development. Hunter became the fourth woman to be named an assistant GM, joining Vancouver’s Emilie Castonguay and Cammi Granato as women currently in that job.

“It’s been really encouraging that you’re seeing women in different roles, whether it’s in coaching, whether it’s in management, athletic training and equipment management,” Engel-Natzke said. “Hopefully the door just keeps opening a little bit more and I hope in a couple years it’s not as big of a deal — it’s kind of just another hire.”

“Emily’s been a part of the NHLCA Female Coaches Development Program since its inception, and with one of the main objectives being to support women that aspire to coach in the NHL, I couldn’t be happier that we’ve broken that barrier,” Artkin said. “Emily is the first but certainly not the last. I can’t wait to see what’s ahead for her and other women that want to coach in the NHL. There really is no limit.”

What’s next for the NHL and the Metaverse?
Blackhawks Should Target These 4 Dallas Stars in Kane Trade
Sharks News & Rumors: Marleau, Wilson, Knyzhov & More
4 Blues Who Will Be Under the Microscope for 2022-23
Would You Rather Edition | Puck Personality