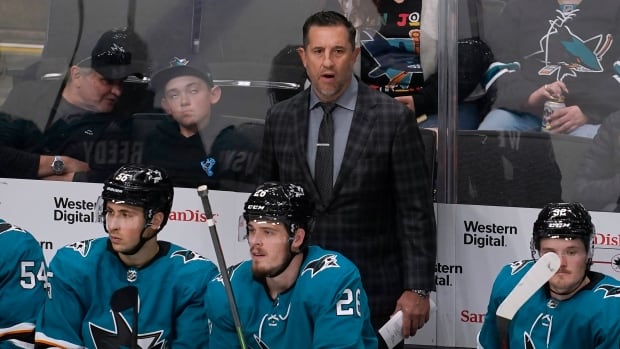 The San Jose Sharks have fired coach Bob Boughner and his staff two months after the regular season ended.

The team confirmed the moves Friday, after reports surfaced Boughner and assistants John MacLean and John Madden were informed Thursday night they were being let go. Video coach Dan Darrow also was fired, and the Sharks said no replacements were immediately named.

The organization is still in the middle of a lengthy search for a general manager after Doug Wilson stepped down after nearly two decades on the job. Interim GM Joe Will made these moves.

Boughner, 51, coached the Sharks for the past two and a half seasons after replacing Peter DeBoer in December 2019. They missed out on the playoffs each of the last three years following a run of 14 playoff appearances in 15 seasons, including a trip to the 2016 Stanley Cup Final.

“It has become apparent that the organization is in the process of an evolution,” Will said in a statement. “The bottom line is we have missed the playoffs for the past three seasons, which isn’t acceptable to our owner, our organization, or to our fans. As part of this evolution and evaluation, we felt it was in the best interest of the club to allow the next Sharks general manager to have full autonomy related to the make-up of the on-ice coaching staff moving ahead.”

Boughner had one year remaining on his contract at $1.5 million US. There is just one NHL head-coaching vacancy left in the league with the Winnipeg Jets.

“The past two-plus seasons have been extremely challenging — on and off the ice — and Bob and his staff worked admirably under some very difficult circumstances,” Will said. “This change is not an indictment of their performance as much as it is a recognition of the complete organizational reset that we feel is in the best interest of the team at this point.”

Boughner played almost 700 NHL regular-season and playoff games as a rough-and-tumble defenseman before moving into coaching. This was his second stint behind the bench with San Jose after spending two years as an assistant on DeBoer’s staff from 2015-17 before taking over as coach of the Florida Panthers.