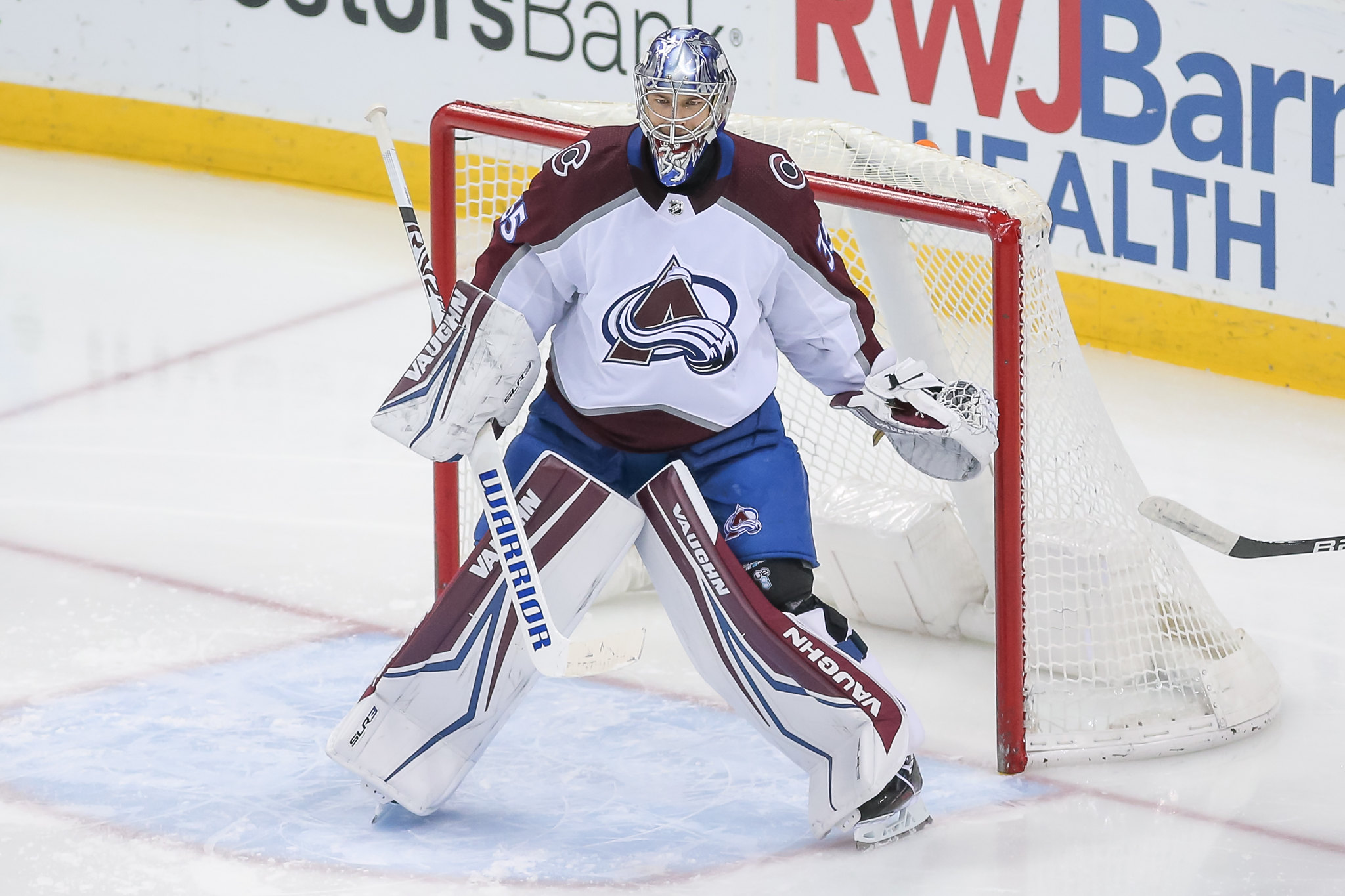 As a rebuilding club, the Chicago Blackhawks have several glaring weaknesses, but perhaps their most significant hole is in net. Both Kevin Lankinen and Collin Delia are set to become unrestricted free agents (UFA) come July 13, and there’s no guarantee either returns to the team, leaving Chicago without an NHL goaltender under contract for now.

With that in mind, it might seem tempting for Chicago to pursue a high-profile name to fill the void come free agency, most notably Jack Campbell, Ville Husso, or Darcy Kuemper. The Blackhawks have just over $20 million in cap space entering the offseason, so they have more than enough money to sign one of these goaltenders, all of whom will likely receive multi-year deals. However, while these names may seem like great options, they are exactly the type of players the Blackhawks should avoid right now.

It’s a new era for Chicago. Long gone are the days of trying to win now and going all-in. While Blackhawks general manager (GM) Kyle Davidson has said he hopes the team can attain some level of success in 2022-23, he’s also admitted this will probably be a long-term rebuild. Thus, while the capital is available, it doesn’t make sense for the Blackhawks to spend big at the position.

With this offseason being Davidson’s first at the helm, it’ll be interesting to see how he utilizes Chicago’s current cap space. Though there’s enough money to make a big splash, Chicago fans should keep their expectations low given the team’s current situation. That includes in goal, unlike last offseason when the Blackhawks acquired five-time All-Star Marc-André Fleury in an attempt to salvage the club’s competitive window.

Just because the Blackhawks have the resources to pursue Campbell, Husso, or Kuemper doesn’t mean they should. First, it’s not a sure thing either goaltender will be on the club the next time they are competitive. While they all had solid 2021-22 campaigns, Husso is in his late 20s while Campbell and Kuemper are in their early 30s. Neither would likely fit well with Chicago’s timeline of rebuilding, even if they’d bring a veteran presence or some level of stability to the locker room like Fleury did last season.

Now, let’s say all three of the aforementioned goaltenders receive contracts of four to six years with average annual values (AAV) of $5-6 million. Come to the end of their deals, it’s possible the Blackhawks will have developed their No. 1 goaltender of the future or will have found him via free agency or trade should they be ready to compete.

There’s no doubt either three of these goaltenders would make the Blackhawks better and not worse. Yet, if the team signs one of them, it’s possible they could be in a reduced/backup role later on, which could become a significant overpayment. At 29.7, the average age of all three, Fleury had already established himself as a potential Hall-of-Fame candidate who could remain a starter long-term. Campbell and Husso certainly haven’t done that yet nor has Kuemper, even as he’s emerged into arguably a top-10 goalie league-wide.

With that said, should the Blackhawks sign one of these names, you could certainly argue the club could trade him later on. However, who knows what their value might be three, or even just two years from now? Maybe they’d be the final trade chip of Chicago’s rebuild, but it would be more effective for the team to sign a low-cost veteran at one to two years with the idea of possibly flipping him earlier on in the rebuilding process.

As a rebuilding club, the Blackhawks can’t afford to overpay anyone right now, and saving capital for the future should be a priority for Davidson. Remember, Chicago has five pending restricted free agents (RFA) this offseason, and while I don’t think all will return, it’s still something to take into consideration.

Should he remain on the team, Alex DeBrincat will surely be due for a raise next summer as he’ll become an RFA then. If you want to look ahead further, promising young players such as Taylor Raddysh and Lukas Reichel will be RFAs in 2024. Of course, that’s not to say they’ll be key pieces of the next competitive Blackhawks club. But as Davidson chooses who stays, it’ll be important to assess the bigger picture. Ideally, for Chicago, more prospects will be developed and thus due for eventual raises. Why potentially let go of some of that money now when the current chances of competing are slim?

As is, the Blackhawks have two solid pieces to build around: DeBrincat and Seth Jones. Jones, specifically, is entering the first season of an eight-year deal with an AAV of $9.5 million, which you could most certainly argue is an overpayment despite being a top-pairing defenseman. Though it’s pretty much a sure thing neither Campbell, Husso, nor Kuemper will garner that type of money, the deal should serve as a reminder of just how often teams can overpay players come free agency.

If the Blackhawks were still in “win-now” mode, it would make far more sense to chase one of these three options, just as they did last year by acquiring Fleury as well as Jones and Tyler Johnson. However, with where they are now, it’s not a viable solution nor is it worth the long-term risk given how long the rebuild could last.

Chicago Has Other Options

While signing Campbell, Husso, or Kuemper might not be a smart idea for the Blackhawks, that’s not to say they shouldn’t avoid the need in net. Chicago has three promising prospects at the position: Arvid Söderblom, Drew Commesso, and Jaxson Stauber. However, neither seem ready to make the leap to the NHL — even Söderblom, who saw his first taste of NHL action last season.

A better idea might be re-signing Lankinen while finding a veteran in the short term. Though he had a decent rookie campaign in 2020-21, Lankinen struggled greatly last season, going 8-15-6 with a .891 save percentage in 32 games. Though I’d be just fine if the Blackhawks moved on from him, he’s at least familiar with the team and could even become a trade chip himself should his performance improve.

Lankinen, 27, is the same age as Husso, but bringing him back would be a low-risk move even if there’s not much upside. Unlike Delia, he’s proved himself as an NHL-caliber backup. Though it wouldn’t be an attractive situation, he could split the duties with a low-cost veteran such as Braden Holtby, Thomas Greiss, or Martin Jones. Additionally, Petr Mrázek and Matt Murray have been discussed as potential trade candidates (from ‘Blackhawks draft primer: What we’re hearing about Alex DeBrincat, potential picks and more, The Athletic, 07/03/22) and have contracts Chicago could take on in the short term.

Holtby, in particular, would be a good target for the Blackhawks. Like Campbell and Kuemper, he’s old enough to serve as a mentor but would certainly come at a lower cost and for shorter term. At 32, his days as a perennial Vezina Trophy candidate with the Washington Capitals are far behind him, but he’s a Stanley Cup champion known for his leadership. His intangibles would probably benefit what could be a young Chicago roster come Opening Night, and like Fleury last year, he could emerge as a trade chip later on even if the return is minimal.

The Blackhawks have a major need in net and have several routes they can take to address it. However, the rebuild has barely begun and fans need to be patient. Finding and developing high-quality, young talent — including their next No. 1 starter — should be one of Chicago’s top goals right now.

With the position the Blackhawks are in, it just doesn’t make sense to make a splash yet. It won’t help Chicago win many games, nor will the results be pretty, but finding short-term, stopgap-type solutions should be the way to go until the rebuild progresses.

Connor Smith covers the Chicago Blackhawks for The Hockey Writers. He is from Naperville, Illinois, and recently graduated from Ball State University in May 2022 with a bachelor’s degree in journalism, earning summa cum laude honors. This fall, he plans to attend the Medill School of Journalism in Chicago to further his studies and earn his master’s. Along with The Hockey Writers, he’s written and edited for The Ball State Daily News, Ball State’s on-campus student newspaper, and has interned for Best Version Media (BVM) Sports and Jersey Column, a Georgia-based sports blog. You can find more info about Smith and his work through his online portfolio, connornsmith0719.wordpress.com.