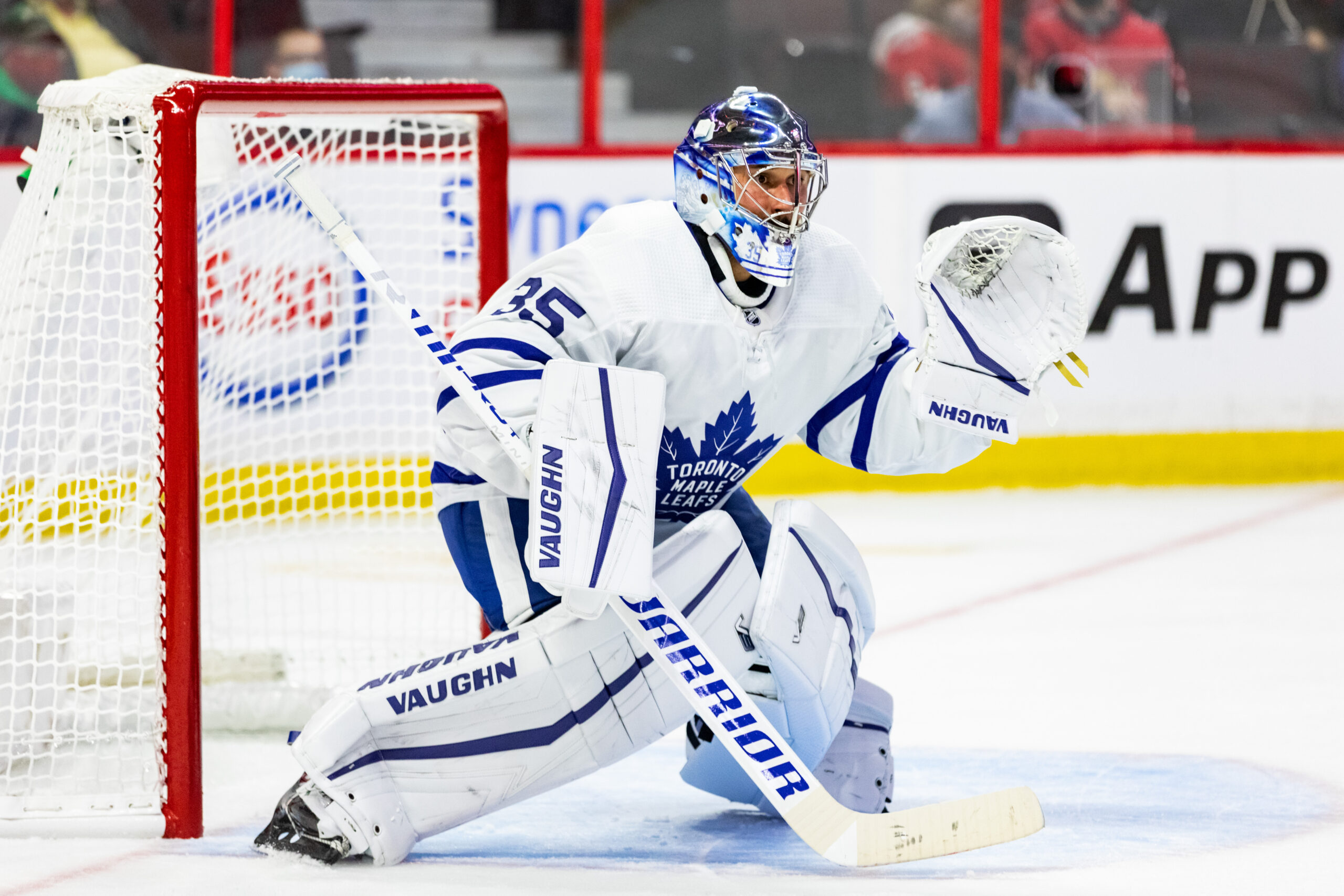 The comparisons are already happening. Yes, the Ottawa Senators traded a first-round pick and received Alex DeBrincat from the Chicago Blackhawks, while the Toronto Maple Leafs had to trade a first-round pick for someone to take Petr Mrázek and his contract off their hands.

While that’s one way to look at the recent move for general manager Kyle Dubas, another way to look at it is that it’s a move based solely off value — the value of moving the remaining two years of Mrázek’s contract and the value in which they were able to get from the pick they acquired in return for Mrázek and the 25th overall selection in the 2022 NHL Draft.

For those behind the eight ball on this, the Maple Leafs moved their first-round pick, 25th overall, and Mrázek to the Blackhawks in exchange for the 38th overall pick — a second-round selection in 2022. Essentially they dropped 13 spots in the draft to rid themselves of a bad contract that admittedly shouldn’t’ve been signed last offseason.

They didn’t lose a pick in the deal and ultimately made room to acquire — or re-sign — a goalie that can, in their minds, help them get past the first round of the playoffs. So let’s break down the value of this deal.

Maple Leafs Moving Mrázek Was A Must

It was going to come down to a buy out or a trade for the Maple Leafs and Mrázek. It’s as simple as that. A buyout would’ve left money on the team’s salary cap with no production and nothing to show for it, while the other option may have forced the Maple Leafs to retain salary and could’ve cost assets.

Instead, Dubas made a pretty clean move when he sent Mrázek to the Blackhawks, retaining no salary and moving down in the draft just 13 spots. In fact, look at the separation of talent in this draft. There’s very little difference in what the Maple Leafs could’ve acquired at 25 versus what they did pick up at 38, that being 18-year-old centre Fraser Minten.

In moving Mrázek, however, it gives the Maple Leafs a much needed break when it comes to the salary cap as he was signed for the next two years with a $3.8-million annual average value (AAV).

Now, speculate all you want as to who will replace him in net, be it Jack Campbell, John Gibson or one of the other handful of names that’ve been thrown out there amongst Leafs Nation. The fact is, the Maple Leafs shed necessary cap to try and fill that hole with a player they want on a deal that might be more realistic when it comes to a performance-for-dollar-amount ratio than that of Mrázek.

The price to take that contract was the 25th overall selection in this year’s draft. It was a pick that the Blackhawks used to acquire Sam Rinzel. While I’d argue he wasn’t the best available player at that point, it’s clear the Blackhawks knew what they wanted and got him — forcing players that could’ve been taken at 25th to fall further. It’s a snowball effect that would eventually fall to the Maple Leafs at 38th overall, the pick they acquired from the Blackhawks.

So was giving up the first-round pick that high of a cost for the Maple Leafs? Had Mrázek only had one year left on his deal, maybe we’re having a different conversation. Still, that’s a maybe. But to shed two years of a bad deal that Dubas clearly knew he made a mistake on, for it to cost him just 13 spots in the draft is marginal at best.

As for the pick, were there some players that the Maple Leafs’ would’ve liked leading up to the Minten pick? Surely there were. Names like Ryan Chesley and Jagger Firkus come to mind. That said the Maple Leafs wouldn’t have made the move unless they felt they could get a player off their list that still checked their boxes at 38.

He surely wasn’t the first name on most Maple Leafs fans’ draft board, but then again there was no indication Dubas was going to move down in the draft. Still, Minten provides the team with a sizeable option down the middle when it comes to prospect potential.

As of now, he’s six-foot-one and just shy of 200 pounds and while he admitted following his selection that he doesn’t believe he’s physically ready to make the jump to the NHL, the recognition of what he does need to do makes for a promising future for the Kamloops Blazers’ forward.

Regarding his offensive game, the Maple Leafs took a player who is coming off his best offensive season in the WHL thus far with 20 goals and 55 points in 67 games during the regular season. He added another 16 points in 17 playoff games and should add to that production with another season under his belt.

This also isn’t the first time we’ve seen the Maple Leafs go off track when it comes to what outside expectations are for a pick. Back in 2020, the team took Rodion Amirov with the 15th overall selection – a pick that some questioned at the time.

Related: Maple Leafs’ Blockbuster Could Solve Goaltending Issue Once & For All

While no one will really be able to judge the impact of the Minten pick until a few years from now, one thing is for sure — Dubas’ admission to the bad Mrázek contract was clear in his wanting to rid the team of it.

Still, he stood by what he said earlier in the offseason and didn’t just make a move for the sake of making a move, rather he found a way to still capitalize on a valuable pick while shedding the Maple Leafs of the remaining cap on Mrázek’s deal.

Andrew is in his 8th year reporting for The Hockey Writers covering the Toronto Maple Leafs. He began his broadcasting with CBC’s Hockey Night in Canada team as well as being part of their coverage of the 2014 Winter Olympic Games in Sochi. He’s the former play-by-play voice of the London Jr. Knights for Rogers TV and currently hosts the Sticks in the 6ix podcast. You can follow him on Twitter at @AndrewGForbes.