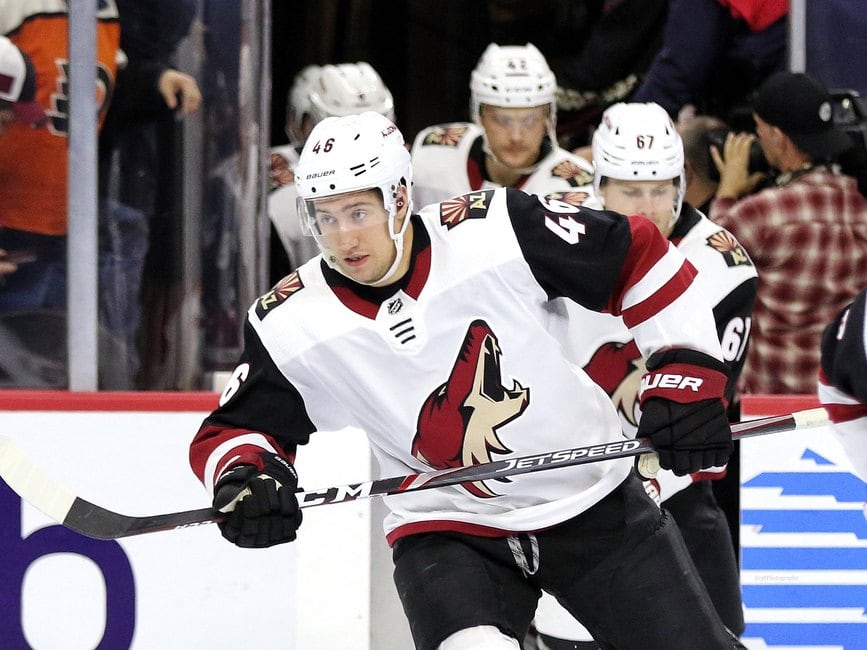 The Montreal Canadiens stormed out of the gates at the 2022 NHL Draft by selecting Juraj Slafkovsky first overall and then trading Alexander Romanov in a three-team deal for Kirby Dach. They finished the draft with several solid picks through the next six rounds, then headed right into their rookie development camp the day after it ended. This week, the free agency window opens, and the Habs and every other team will do their best to sign players to improve their club going into the 2022-23 season.

The Canadiens, however, are in a tough spot with cap issues. If they can’t clear space, they won’t have the money to sign any top free agents (FA). However, they could sign some cheaper players to help complement the young roster and play bottom line and pairing minutes.

Ilya Lyubushkin started last season with the Arizona Coyotes and was traded to the Toronto Maple Leafs in February with Ryan Dzingel for Nick Ritchie. The Leafs needed a big defenceman to clear the front of the net and lay big hits, and he was precisely what the Leafs were looking for, finishing the season with 32 blocks and 93 hits in 31 games. He also quickly became a fan favourite and was credited with 28 hits in seven playoff games, providing the grit Toronto needed.

Lyubushkin also had a career year with 15 points, but don’t expect him to be much of an offensive threat, considering he only has three career goals, with two of them coming last season. He has a powerful shot but isn’t a mobile defenceman,. He is big and mean and will protect the goalie and, like Romanov, puts fear into wingers’ hearts when they skate down his side. He made just $1.3 million last season and wouldn’t demand much of a raise if any. If the Canadiens were interested, he would be a solid bottom pairing defenseman that could help with the rotation of the younger guys like Jordan Harris, Justin Barron and possibly Kaiden Ghule. He is also a right shot which the Habs are short on going into next season.

Brendon Lemieux is a feisty 26-year-old winger who isn’t afraid to mix it up and get under the skin of his opponents. Lemieux played a pivotal role with the Los Angeles Kings as their agitator and often got skilled players off their games with his antics. He had 122 hits last season with 11 takeaways and Corsi of 56 percent while playing a little under 11 minutes a game. He won’t help the Canadiens’ scoring woes, but he will give the fourth line some grit.

Lemieux will come at a low price for the Canadiens based on his stats from last season and the role he will play. His salary last season was $1.5 million, and he shouldn’t come any more expensive than that or at least under $2 million. He will provide the Habs with a sturdy, hard-hitting forward who can protect his teammates and drop the gloves if necessary. The only issue here would be that Montreal re-signed Micheal Pezzetta, who plays a similar game with less experience. Having said that, signing Lemeiux would give the team some insurance on the ice and a good mentor for Pezzetta if that’s how they see his game developing.

Sonny Milano would be an exciting addition to the Canadiens. He was drafted 16th overall in 2014 by the Columbus Blue Jackets but never did thrive with the team. He was eventually traded to the Anaheim Ducks where he had a bit of a breakout year last season, scoring 14 goals and 34 points in 66 games. The 6-foot, 194-pound winger would bring size and speed to the Canadiens and could be a cheap third-line addition to the club who could play on the powerplay, where he had five of his 14 goals last season.

Milano made $1.6 million last season and with his increase in production could ask for around $2.5 million. The Canadiens have many third-line wingers in Joel Armia, Paul Byron and possibly Brendon Gallagher, but Milano could be an excellent fourth-liner who could move up and down the lineup. The Habs do have to dump some salary, and if they move a winger or two, he could be a cheap replacement. What Montreal can’t do is sign him for too much and then have yet another $3 million bottom-six winger on the books.

Unless the Canadiens move out a lot of salary in the next day or so, these are the types of players they will be signing to fill out the roster. If they don’t add players of this type, then they must rely on rookies from the American Hockey League’s Laval Rocket, which could hurt the development of some of their younger players.

If any recent rumours are true of players moving, then the Canadiens will be able to afford a few FAs. General manager Kent Hughes has a lot of work ahead of him with the teams’ cap space, so it may be slim pickings on the FA market for him if he doesn’t make some salary-clearing trades.

Trege Wilson has been a freelance content writer for the past four years and with the  THW for the past year. He is the co-host of the popular Montreal Canadiens podcast Habs Unfiltered on IHeartRadio.com.Trege  is very passionate about all things Canadiens and loves to provide his readers with great quality news, rumours and opinions on the Montreal Canadiens. Trege has also been featured on JblamSports and JDFSports Podcasts; for interviews and guest appearances, you can contact him at any of his social media accounts listed under his photo in such articles as this one.