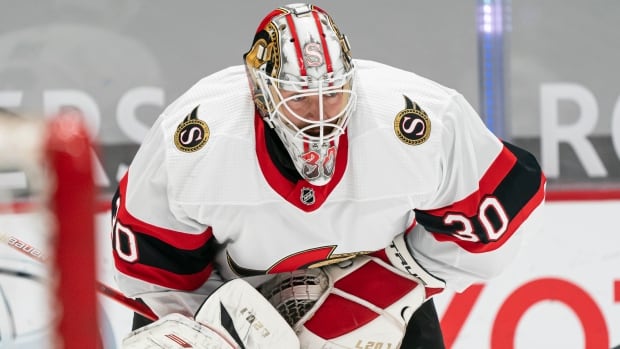 The Maple Leafs’ intense pursuit of netminder Matt Murray is over — the 28-year-old Ottawa Senators netminder is leaving the nation’s capital and heading to Toronto.

In the playoffs, the Thunder Bay, Ont., native owns a record of 29-21 with a 2.18 goals-against average, a .921 save percentage and six shutouts. Murray was a part of Pittsburgh’s Stanley Cup championship teams in 2016 and 2017.

In international competition, Murray helped Canada capture a silver medal at the 2019 IIHF World Championship and suited up with Team North America at the 2016 World Cup of Hockey.

Murray was originally selected by the Penguins in the third round (83rd overall) in the 2012 NHL draft.

Oilers give Kane permission to talk to other teams

The Edmonton Oilers have granted Evander Kane permission to speak with other teams before the NHL’s free agency period opens and Colorado’s Nicolas Aube-Kubel went from celebrating with the Stanley Cup on Saturday to not receiving a qualifying offer from the Avalanche on Monday.

In a text to The Associated Press, Kane’s agent, Daniel Milstein, wrote he’s opening talks with other teams while also continuing discussions with the Oilers with his client eligible to become an unrestricted free agent on Wednesday.

Kane signed with Edmonton in January after the San Jose Sharks terminated the remainder of his seven-year, $49 million US contract for violating COVID-19 protocols while in the American Hockey League. Kane has challenged the Sharks’ decision by filing a grievance through the NHL Players’ Association.

Earlier last season, he was suspended by San Jose for 21 games for submitting a fake vaccine card.

Kane topped 20 goals for the eighth time in 13 NHL seasons by scoring 22 goals and 39 points in 43 games with Edmonton. Oilers GM Ken Holland last week said he was having daily conversations in a bid to re-sign Kane.

Forward Valeri Nichushkin is staying put with the Stanley Cup champion Colorado Avalanche, while Evgeni Malkin’s tenure with the Penguins may be over after 16 seasons.

Malkin has decided to go to free agency rather than re-sign with the Penguins before the start of free agency, a person with knowledge of the move told The Associated Press on Monday. The person spoke to The AP on condition of anonymity because neither Malkin nor the Penguins have disclosed this information publicly, which comes two days before the NHL’s free agency period opens.

Malkin’s decision potentially harkens the end of an era in Pittsburgh, where the soon-to-be 36-year-old teamed with Sidney Crosby to win the Stanley Cup three times. Malkin has topped 20 goals 13 times, and immediately becomes one of the more high-profile players set to hit the market on Wednesday.

Malkin’s decision comes with the Penguins attempting to balance their payroll and after re-signing defenceman Kris Letang to a six-year $36.6 million contract last week. Malkin had just completed an eight-year, $76 million contract.

Penguins GM Ron Hextall said last week he was not as close to a deal with Malkin as Letang.

Pittsburgh late Monday agreed to a $30 million, six-year deal with winger Rickard Rakell, whom the team acquired at the trade deadline from Anaheim.

Nichushkin, meantime, isn’t going anywhere after signing an eight-year, $49 million contract with Colorado. He spent the past three years with Colorado and is coming off a season in which he had a career-best 25 goals and 52 points in 62 games in the regular season before adding nine and six in the playoffs.

The Avalanche also promoted Joe Sakic to the role of president of hockey operations on Monday.

Sakic was the architect behind a team that captured its first title since 2001. The Hall of Fame forward-turned-front office executive was recently honoured as the general manager of the year.

The team also announced Monday that assistant GM Chris MacFarland will now serve as the GM.

Colorado capped its most successful regular season by dethroning the two-time defending champion Tampa Bay Lightning in the final. The Avalanche closed out the series in six games and finished the post-season with a 16-4 mark.

It was another title for Sakic, who was the captain of the Avalanche when they hoisted the Stanley Cup in 1996 and 2001. He became the first in NHL history to win as a captain and GM with the same organization.

Colorado finished with a combined 72 wins through the playoffs and regular season. That ties the league record set by the 1976-77 Montreal Canadiens and matched by the 1983-84 Edmonton Oilers and 1995-96 Detroit Red Wings.

Sakic retired from the Avalanche as a player in July 2009. He was hired as an executive advisor/alternate governor by the team in March 2011. This was his ninth season as the team’s executive vice president/GM.

The team began what figures to be a busy off-season by re-signing veteran forward Andrew Cogliano to a one-year deal. Colorado also acquired goaltender Alexandar Georgiev from the New York Rangers in a move that likely spells the end of Darcy Kuemper’s time in Denver.

The Avalanche have quite a few free agents on their roster, including forwards Nazem Kadri and Andre Burakovsky.There’s also defencemen such as Josh Manson and Jack Johnson.

Colorado informed forward Nicolas Aube-Kubel he will not receive a qualifying offer and will become a free agent when the market opens, a person with knowledge of the decision told The AP. The person spoke on condition of anonymity because the team had not announced its decisions.

Derek King is staying with Chicago as an assistant coach on Luke Richardson’s staff.

King finished last season as Chicago’s interim coach after Jeremy Colliton was fired on Nov. 6. He was in the mix for the full-time job, but Richardson was hired last month.

King, 55, went 27-33-10 with Chicago, drawing praise from general manager Kyle Davidson for his work during a challenging period for the rebuilding franchise. The former NHL forward coached the team’s AHL affiliate in Rockford before taking on the interim role.

Kevin Dean also was hired as an assistant on Monday. Dean, 53, was an assistant with the Boston Bruins for the previous five seasons. Dean was an NHL defenceman for seven seasons, finishing his playing career with 96 games with Chicago.

“It’s great to have this experienced staff with me behind the bench,” Richardson said in a release. “Derek has made an impact here on this organization and I’m thrilled to have someone like him on our staff. Kevin’s mind for the game and defensive focus will be an asset for us. It’s great to have the cornerstone of this coaching group finalized and we will continue to add a few pieces.”

Chicago first placed veteran forward Brett Connolly and centre Henrik Borgstrom on waivers with the intention to buy out the remainder of their contracts. The team also elected not to extend qualifying offers to centre Dylan Strome and forward Dominik Kubalik.

The Washington Capitals’ bid to restock their goaltending ranks resumed with Ilya Samsonov set to become a free agent after not being tendered a qualifying offer days after trading Vitek Vanecek to New Jersey.

General manager Brian MacLellan said the team went into the off-season determined to remake its goaltending and also fielded offers on Samsonov.

Payroll played a role in the decision with Samsonov eligible for arbitration. In projecting Samsonov to play a backup role, the Capitals were concerned he would be awarded a contract more suitable for a starter.

Washington was already in the market for a veteran goaltender and may now need two.