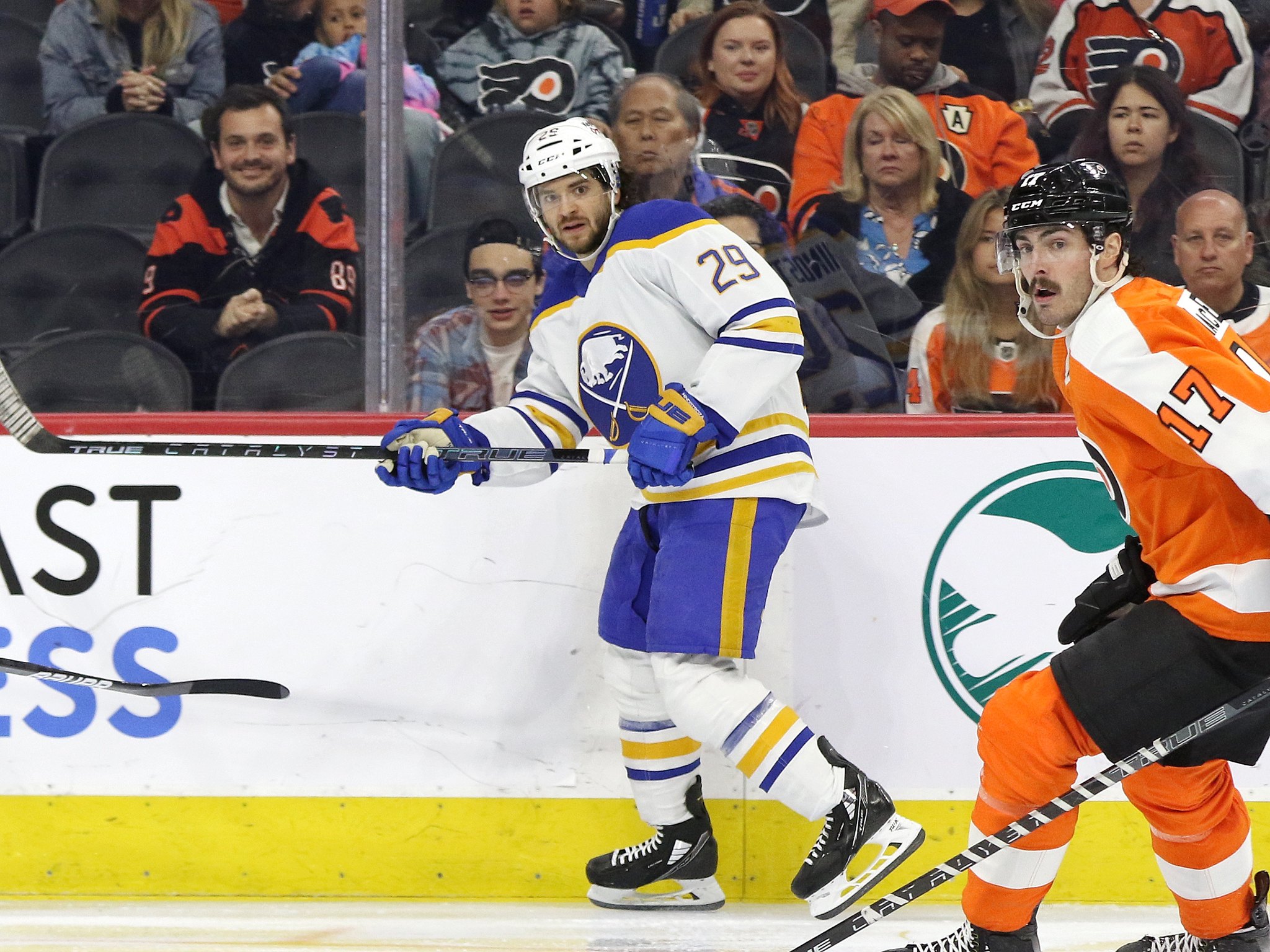 Vinnie Hinostroza is staying put, at least for one more season. The Buffalo Sabres announced that the winger had re-signed with the team on a one-year contract worth $1.7 million on Tuesday, one day before he would have become an unrestricted free agent.

The move was a wise one for the Sabres. After a strong performance this past season, Hinostroza carved a niche for himself in Buffalo and the team would have looked foolish had it let him walk away.

Hinostroza Was a Big Plus for Sabres

Coming off their dismal 2021 season, Buffalo had numerous holes to fill in its roster and signed Hinostroza to do just that. He had become something of a journeyman over the previous three seasons, making him a cheap, bottom-six forward option for Sabres’ general manager Kevyn Adams to snatch up. After agreeing to a one-year, $1.5 million deal for the season, the expectations were certainly not high for him, but he defied them anyway.

The Chicago native became one of the surprises of the year for the struggling team, posting 13 goals and 25 points despite missing 20 games due to injury. His strong skating and two-way play were praised as he finished with a minus-11 rating on the year, which isn’t bad considering the best on the team was a minus-3. As a result, Sabres head coach Don Granato was able to trust him with time on both the power play and penalty kill. He proved to have a bit of a flair for the dramatic as well when he scored twice in a three-point performance on Mar. 13 to help the Sabres defeat their arch-rivals, the Toronto Maple Leafs in the 2022 Heritage Classic.

It was a welcomed addition for a team that has badly lacked contributions from third and fourth line forwards in recent years. Given this, the Sabres would have been crazy to not bring back Hinostroza for an encore. The hustle and determination he exhibited daily had a noticeable effect, particularly on his young teammates Dylan Cozens and Peyton Krebs, with whom he proved to have excellent cohesion. With the Sabres likely to entrust bigger roles to their younger players next season, having the undrafted winger around is an ideal situation for them.

A Home For Hinostroza?

It’s tough to deny that the new contract was well-deserved for Hinostroza, who has bounced around quite a bit over the past few years. After being traded to the Arizona Coyotes from the Chicago Blackhawks in a salary dump, he posted his best season to date in 2018-19 with 16 goals and 39 points. The Coyotes were evidently not impressed, however, as he was not re-signed after the 2019-20 season and moved on to Florida. The Panthers traded him back to his hometown team after just nine games and he became a free agent once again after the COVID-shortened 2021 season where he eventually signed with the Sabres.

Even though it was only a one-year deal, it ensures the Sabres kept an important piece of their roster and gives Hinostroza the stability he’s been looking for (as well as a slight raise). The upcoming season will be the first time he’s played for the same team two years in a row since 2017-18 with Chicago. Whether the Sabres opt to trade him or keep him beyond this season remains to be seen, but for now, the 28-year-old seems to have found a home in Western New York, and there’s no denying both parties are better for it.

The 2022-23 campaign is going to be a pivotal one for the Sabres. After a much-improved season in which it seemed that the team may have finally found its identity, Buffalo will be expected to continue its progression. For that to happen, every player will have to step up and play their role, and Hinostroza is no different.

Hinostroza established himself as a leader among the team’s third and fourth line players, and chances are he’ll find himself in that spot again. A seasoned veteran despite his relatively young age, the Sabres are a deeper and more well-rounded team with him aboard, and they’re hoping he can improve upon the foundation he has set for himself. If he can, Buffalo’s chances of further improved fortunes are that much better.

Thanks so much for taking the time to read my content! I’m a Niagara University journalism graduate and a lifelong Buffalo Sabres and hockey fan. I’ll gladly discuss anything Sabres with you. Talk to me on Twitter too if you’d like!