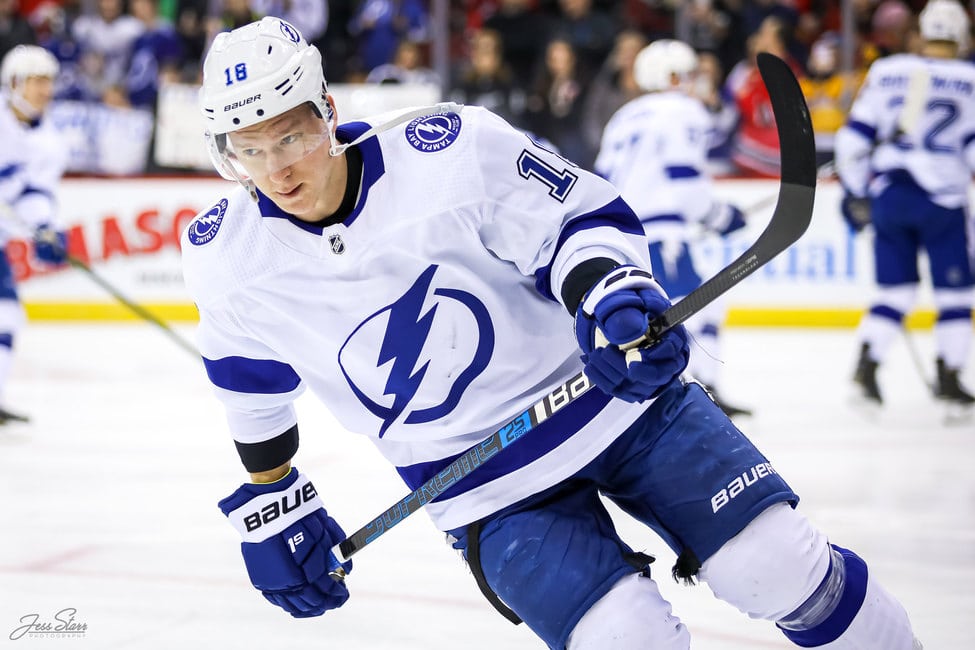 After losing out on the Johnny Gaudreau sweepstakes, the New Jersey Devils pivoted and signed Ondrej Palat late last night to a five-year contract with a cap hit of $6 million. Palat, 31 years old, is coming off a third straight Stanley Cup Final appearance and 18 goals and 49 points in 77 regular-season games.

Palat will assist the Devils on the ice, but it’s off the ice where he’ll help a young squad such as New Jersey’s. At the same time, there’s definitely some concern about his contract and how it’ll age. Let’s get into it all and break down the newest Devil.

Palat was arguably the top remaining free agent winger left on the market when the news broke that the Devils were signing him. After a massively successful run with Tampa Bay Lightning that saw him appear in four Stanley Cup Finals and come away with two rings, he hit free agency for the first time in his career. On top of the 18 goals and 49 points he totaled, he scored more than a few clutch goals to lead the Lightning to their third straight Stanley Cup Final appearance.

After netting 46 points in 55 games during the pandemic-shortened season a year ago, Palat had a solid 2021-22 campaign. He finished with a Corsi for percentage (CF%) of 50.79 percent and expected goals percentage of 54.82 percent (xG%). His five-on-five production was close to first-line levels, as he averaged 1.94 points per 60 minutes.

And despite his age, Palat had one of his more valuable seasons in recent memory. He finished with an expected goals above replacement (xGAR) of 9.4, the best he’s posted since 2016-17, when he had an xGAR of 10.6. Over the last three seasons, he’s averaged an xGAR of 7.8. That would’ve made him the Devils’ fifth-most valuable player behind Jesper Bratt, Jack Hughes, Jonas Siegenthaler and Nico Hischier.

A big reason Palat is a valuable player is that he contributes at more than even strength. His power play results are a bit weaker, but he has played well on the penalty kill. His Stanley Cup experience is not something you can measure in numbers, but for a Devils team that has lost a lot of games the last few seasons, having someone like Palat, who’s been through it all in his career, will help.

Palat’s Contract Is a Bit Steep

Evolving-Hockey predicted Palat to come away with a cap hit of $5.936 million on a five-year deal as a UFA signing with a new team. Even after signing him, the Devils have just over $17 million in cap space. Their cap situation is in a good place. And that’s with them still having to sign Jesper Bratt and Vitek Vanecek, both of who are restricted free agents.

The Devils could have afforded to overpay for Palat, and they did. In doing so, they get a solid second-line option to strengthen their depth and add a veteran presence who will benefit a young squad. As JFresh described on Twitter last night, Palat is a do a bit of everything type of player:

However, as JFresh said in a follow-up tweet, these types of deals for 31-year-old complementary players have gone south quickly in the past. This isn’t Milan Lucic or Andrew Ladd 2.0, but how Palat’s contract ages will be interesting to watch as the Devils become more competitive over the next few years.

There’s no doubt Palat will have value for next season and even the next two to three years. As stated above, he’s not declining yet and is coming off a pretty solid campaign. He’s going to get a chance to play in the Devils’ top-six, perhaps on a line with Nico Hischier. He fares relatively well off the rush, so he should be productive on a Devils team that wants to play with pace and off the rush.

With that said, the contract is a bit steep. It’s not even necessarily the $6 million cap hit; based on Evolving-Hockey, that’s fair value. It’s the five-year term that could become problematic. Per Dom Luszczyszyn’s model at The Athletic, Palat’s comparisons aren’t the best either:

But instead of going full doom and gloom, the Devils could come out okay on the back half of Palat’s contract. One) players age differently. Would I bet on him aging better than most 31-year-old second-liners in the past? No, but you never know. Two) we may be in a flat cap era now, but by the time the final couple of years of Palat’s contract kick in, there could be a significant rise in the salary cap.

Because of the pandemic and revenue loss from the suspended regular season in 2019-20 and the shortened 2020-21 campaign that had limited attendance in arenas, revenues were down, and escrow debts increased. However, NHL revenues increased significantly this season to a record-high $5.3 billion. There are still the escrow debts the players have to pay off, but once they do, there could be a significant rise in the salary cap. In recent episodes of DFO Rundown, Frank Seravalli hinted that could possibly happen three years from now. The NHL’s new TV deals with ESPN and Turner Sports should also have a positive effect.

I’m not sure how much of a jump in the salary cap there’ll be, but if you’re playing the long game, it could help alleviate some cap problems a few years from now. It’s a wait-and-see approach, so there’s no way to know until the cap actually jumps. But a $6 million cap hit might not be as problematic as it may seem now. That’s something the Devils might be betting and hoping happens with Palat’s contract.

Did the Devils overpay for Palat? Yes, but he’s still a very useful player who’s a productive scorer and playing well at five-on-five. His Stanley Cup experience is invaluable and will help a young team that’s still trying to learn how to win games. With the acquisitions of Erik Haula and Palat, the Devils’ middle-six is stronger today than it was 24 hours ago. It’s a risk for the contract he signed, but as long as it doesn’t become a habit from management, it’s one worth taking for where the team is now.