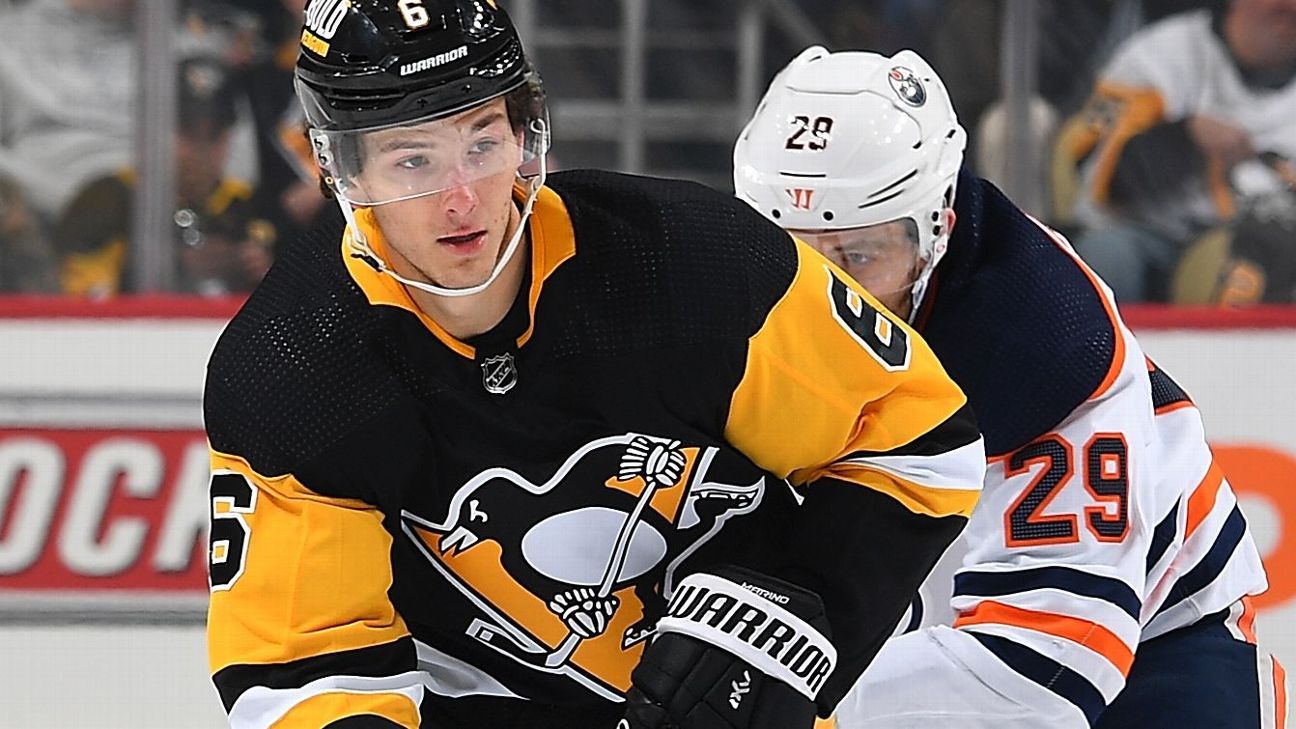 New Jersey Devils general manager Tom Fitzgerald, in a free agency news conference announcing several acquisitions on Friday, told reporters he was still in the market for a veteran defenseman.

On Saturday, he cashed in on that quest, dealing a 2023 third-round draft choice along with Ty Smith to the Pittsburgh Penguins for John Marino.

Marino, 25, can play on the right side for New Jersey — a clear position of need for a club that failed to make the playoffs last season — and he has five years left on a deal that carries a team-friendly salary-cap hit of $4.4 million.

“John is a competitive, highly mobile defenseman who strengthens our back end,” Fitzgerald said in a statement. “He takes pride in his game away from the puck and his puck management and ability to transition play will fit in nicely with our style and the strengths of our forward group.”

While Smith is also a defenseman — and a former first-round pick of the Devils — he is just 22 years old and struggled in his second full NHL season. He is an offense-first defenseman, and on a veteran-heavy Pittsburgh roster, he likely has more time to find his stride without being relied upon to absorb top-line minutes.

“We have high hopes for Ty. We obviously gave up Marino for him who is a very good NHL player, so we have high hopes,” Pittsburgh general manager Ron Hextall said in a video news conference. “Obviously there is a little bit of risk on our part there, but we feel pretty good about it.”

The Devils, who’ve also traded for goaltender Vitek Vanecek and added forward Ondrej Palat in free agency this month, are tactically trying to add veteran players to a core group of young players, many of whom are former first-round draft picks, as their rebuild continues. Marino plays into this, and he will likely occupy the right side of the team’s second pairing. He joins a defensive group that also features Dougie Hamilton, Damon Severson and Ryan Graves.

The Penguins are on the other side of that NHL equation, given they’ve reupped with several of their high-priced veterans this offseason in Kris Letang, Evgeni Malkin and Rickard Rakell. The addition of Smith, who is signed through next season on his entry-level deal, helps that push, as he carries a cap hit of just $863,333, and allowed Hextall some room to acquire Montreal Canadiens veteran defenseman Jeff Petry later Saturday.

In New Jersey, Marino might have the chance to reunite with his college defensive partner, Reilly Walsh. The two made up an impressive pairing for Harvard University before moving onto NHL organizations, and Walsh, who played for New Jersey’s American Hockey League affiliate last season, was called up by the Devils in time to play one game before the schedule ended, and will have a chance to make the NHL roster in training camp.

“This is another move focused on improving our club today,” Fitzgerald said, “while also providing certainty and stability for roster flexibility as we continue to build.”