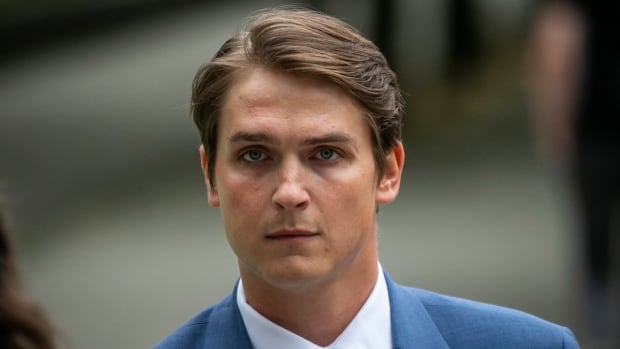 WARNING: This article contains graphic content and may affect those who have experienced​ ​​​sexual violence or know someone affected by it.

Virtanen, 25, is facing one count of sexual assault related to an alleged incident of non-consensual sexual intercourse in his hotel room at Vancouver’s Westin Bayshore Hotel on Sept 26, 2017. He has maintained his innocence since the allegation came to light.

Under questioning by Crown counsel Alan Ip, MS testified she pulled away from Virtanen repeatedly as he attempted to touch, kiss and undress her in his hotel room. She said she explicitly told him more than once that she “seriously and genuinely” did not want to have sex with him.

“I just kept saying no, that I didn’t want to,” said an emotional MS.

Virtanen was 21 at the time of the alleged assault, MS 18.

MS testified that Virtanen replied to her rebukes, “it’s OK, we don’t have to,” more than once.

Afterward, she went to the bathroom and cried.

MS testified after the alleged assault, she spent the night in the hotel room, expecting Virtanen to drive her home. But in the morning, he told her he had practice and gave her money for a cab instead.

On May 1, 2021, the Vancouver Canucks placed Virtanen on leave when allegations of sexual misconduct became public. Two months later, the club bought him out of his contract. This past season he played for Spartak Moscow in the Russian Kontinental Hockey League.

Virtanen is from Abbotsford and was drafted by the Canucks in 2014. In October 2020, the team signed him to a two-year extension worth $5.1 million US.

MS, who is from a small town in B.C.’s interior, testified she met Virtanen at a bar during the 2017 Calgary Stampede and was unaware of who he was or what he did for a living.

MS and two friends joined Virtanen’s group of friends at a house after the bar closed, where she said they all fell asleep. She said in the morning, she and Virtanen shared a kiss and exchanged cellphone numbers.

The two stayed in touch, and when she told him she was coming to Vancouver for a couple of photo shoots and to see friends, they discussed meeting. She said when she arrived in Vancouver on Sept. 26, 2017, he insisted they get together that night.

“I suggested another day. It was getting late, and I would rather meet during the day rather than that late at night,” she said. “I was worried with it being late at night that I might be put into a sexual situation.”

MS said Virtanen picked her up at her friend’s place in North Vancouver in a dark grey or black Dodge Charger. She said they had not made plans.

She said she thought Virtanen lived in Abbotsford and was surprised when he drove directly to the Westin Bayshore Hotel.

“I felt sick, got a sinking feeling in my stomach. It was the exact situation I didn’t want to be put in,” said MS.

MS first went public with the story in April 2021 on an Instagram page that posts sexual assault survivor stories. She did not name herself or Virtanen in the post.

In May 2021, MS filed a civil suit against Virtanen before taking her complaint to police.

In court Monday, MS said at first she didn’t understand the difference between a civil and criminal case and thought the two were the same thing.

She said going public has confirmed in her mind the seriousness of the incident.

“Going to police and getting my story out was reassurance my story was rape,” she told the court.

Virtanen’s lawyer Brock Martland has yet to cross-examine the complainant. The trial is expected to last one week.

Support is available for anyone who has been sexually assaulted. You can access crisis lines and local support services through this Government of Canada website or the Ending Violence Association of Canada database. ​​If you’re in immediate danger or fear for your safety or that of others around you, please call 911.