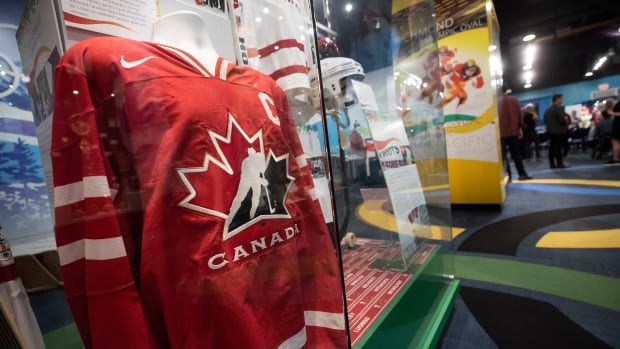 An affidavit filed in an Ontario court case suggests Hockey Canada has maintained a fund to pay for uninsured liabilities, including sexual abuse claims.

The detail is included in a July 2021 affidavit sworn by Glen McCurdie, who was then Hockey Canada’s vice-president of insurance and risk management, as part of a lawsuit launched by an injured player in Ontario.

Hockey Canada did not immediately respond to an email from The Canadian Press requesting comment on McCurdie’s affidavit.

The sport’s national body has been under intense scrutiny since news of an alleged sexual assault at a 2018 gala in London, Ont., involving eight unidentified players — including members of that year’s world junior team — and subsequent settlement broke in May. None of the allegations have been proven in court.

Hockey Canada says it’s reopening an investigation into an alleged sexual assault involving its World Junior team. In an open letter, the organization acknowledges it has not done enough to address the allegations and promises to do better.

Scott Smith, the organization’s president and COO, and outgoing CEO Tom Renney were grilled by parliamentarians during a Standing Committee on Canadian Heritage meeting last month on both the matter and where settlement funds came from.

McCurdie, who retired in December, did not attend proceedings following the death of his father, but has been subpoenaed by the committee for a subsequent round of meetings slated to begin next Tuesday.

Hockey Canada has had federal funding cut off because of its handling of the case and settlement, while a number of corporations paused sponsorship dollars.

The organization released a carefully worded open letter Thursday with a number of promises, including a pledge to reopen an incomplete third-party investigation into the alleged assault.

“We know we have not done enough to address the actions of some members of the 2018 national junior team or to end the culture of toxic behaviour within our game,” Hockey Canada wrote last week.

“For that we unreservedly apologize.”

Smith, who took over from Renney as CEO on July 1, testified on Parliament Hill last month Hockey Canada reported three sexual assault complaints in recent years, including the London incident, but wouldn’t discuss the other two in front of committee.

He added there have been up to two complaints of sexual misconduct each of the last five or six years.

Hockey Canada said in its open letter that participation by players in the third-party investigation into the London incident will be mandatory — unlike before — and that anyone who declines will be banned from all activities and programs.

Smith testified last month “12 or 13” of the 19 players were interviewed before the original and incomplete investigation concluded in September 2020.

The woman who made the assault allegation was seeking just over $3.5 million in damages from Hockey Canada, the Canadian Hockey League and the unnamed players.

The woman’s lawyer said in an email last week his client, who did not take part in the initial probe or speak with police, “will be participating in the Hockey Canada investigation and will not be commenting to media at this time.”

Details of the settlement have not been made public, but Smith testified to parliamentarians last month Hockey Canada liquidated a portion of its investments to pay for the settlement, adding that no public money was used.

Minister of Sport Pascal St-Onge ordered an audit to make sure that’s indeed the case.

The NHL is also conducting an investigation because some of the players are in the league, but isn’t making participation mandatory.

The Standing Committee on Canadian Heritage is set to meet Tuesday and Wednesday next week to hear from a long list of witnesses, including McCurdie.

The committee requested and received a redacted copy of the non-disclosure agreement related to the settlement along with a long list of Hockey Canada communications by Friday’s deadline.

“No one alleges that I was present or involved and I have no personal knowledge of what occurred,” Timmins said in a statement released on social media by his agency, Quartexx Hockey. “I co-operated fully with the initial Hockey Canada investigation and will continue to co-operate in any other investigations as required.”

Victor Mete, who recently signed with the Toronto Maple Leafs, issued a statement last month denying involvement. The defenceman said he was out of the country on a family vacation at the time of the 2018 gala in London.

Colorado Avalanche blue-liner and Conn Smythe Trophy winner Cale Makar told reporters in Denver before the Stanley Cup final he also wasn’t among the group of eight players in question.