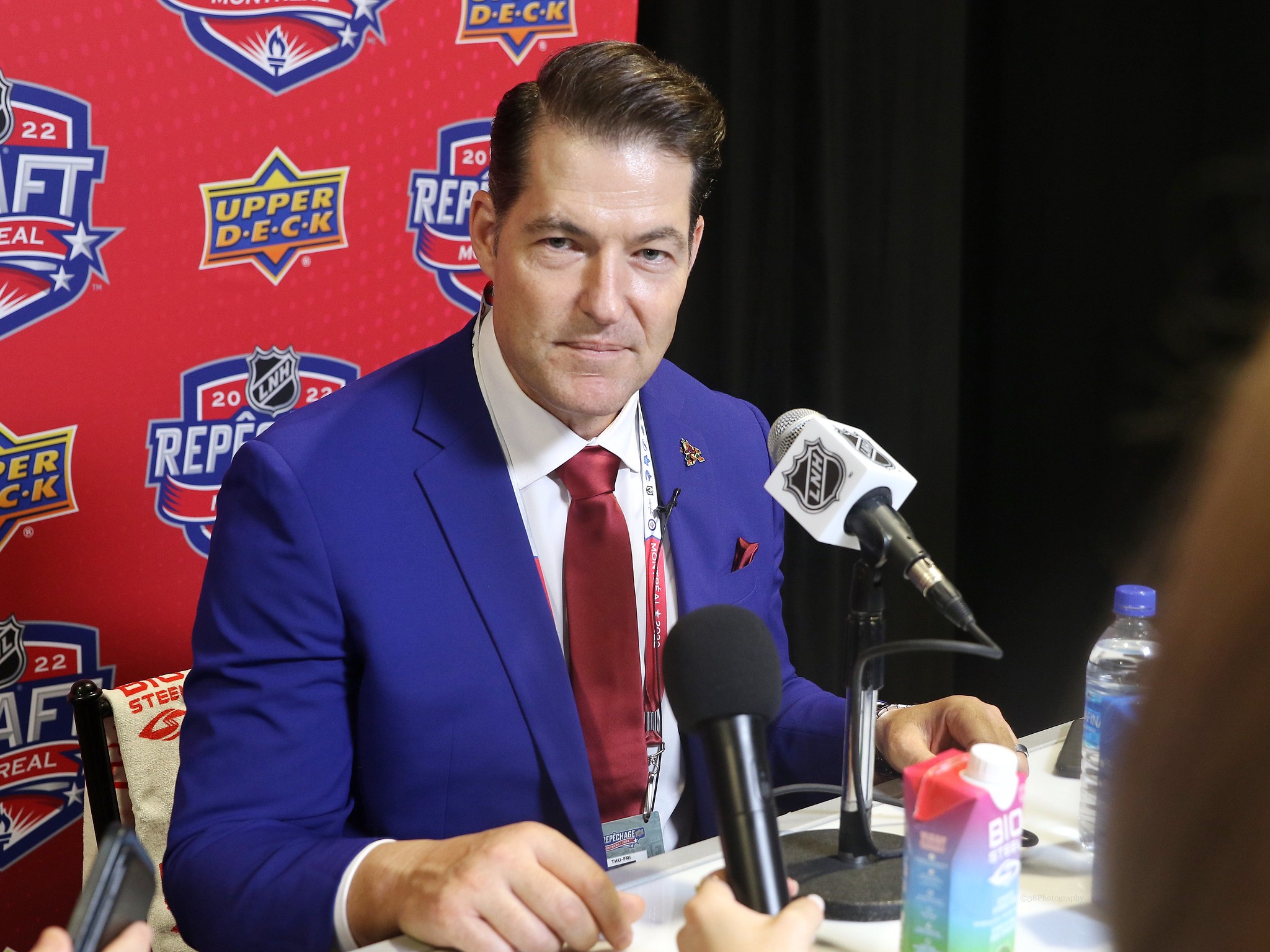 The 2022 NHL Draft wrapped up a week and a half ago now, and general manager Bill Armstrong and company walked away with a bright future in first-round selections in Logan Cooley, Conor Geekie, and Maveric Lamoureux. For Armstrong, the draft was the setting stage for the franchise’s lengthy rebuild, and walking away with these three guys was a win in the Coyotes’ eyes.

For the first time in franchise history, the team drafted a potential franchise center man in Cooley while adding some size in Lamoureux and Geekie. While the rebuild has a long way to go, the Coyotes added to their already bright and promising prospect pool featuring Dylan Guenther, Josh Doan, and Liam Kirk. But what exactly can the Coyotes expect from their trio of first-round selections?

Quite possibly the most exciting prospect to ever be drafted by the franchise, Cooley comes to the desert with the potential to be the future of the franchise. At 5-foot-10 and 181 pounds, some have questioned his size in the past, but it’s something Armstrong isn’t too concerned about, especially considering the team’s star player Clayton Keller is the same height.

Cooley, who’s set to play this upcoming season for head coach Bob Motzko at the University of Minnesota, had a season to remember in the US National Development Program, registering 75 points on 27 goals and 48 assists in 51 games while averaging an eye-catching 1.47 points per game.

While known for his impressive offensive output, Cooley is a strong two-way player who’s solid in the faceoff circle. He has a high hockey IQ and can generate plays while bringing an incredibly creative and smooth demeanor as he maneuvers in and out of pressured situations, in addition to a sharp defensive mindset.

It’s not secret the Coyotes’ weakest position is center, and having a guy like Cooley with his potential is much-needed stability for the organization. While it’ll be a bit before he dons the kachina, he has a bright future in store here in the desert, one that fans should be very excited about.

The Coyotes’ second selection in the first round, originally supposed to be pick 27, came at 11 instead after a trade with the San Jose Sharks. The team used this pick to select Winnipeg Ice forward Conor Geekie. At 6-foot-4 and 209 pounds, the Coyotes got themselves a very promising talent, one who possesses the size and offensive upside to make an impact at the NHL level.

The name Geekie is no stranger around the NHL, with Conor’s brother Morgan currently playing for the Seattle Kraken. Compared to his brother, Conor possesses his own creative skillset. With a combination of size and elite skill that make him a dual-threat, he’s able to beat you with elite playmaking and a laser shot, all while possessing a high-end hockey IQ.

After registering 70 points on 24 goals and 46 assists in 63 games with the Ice this past season in the Western Hockey League (WHL), Geekie looks poised to work on his game some more this upcoming season in order to take the next steps to make the Coyotes roster. Regardless, he has all the features of an NHL player and is a crucial piece to the Coyotes’ future.

The Coyotes’ final draft selection of the first round came after a swap of picks with the Edmonton Oilers in addition to the Zach Kassian acquisition. With their final pick of the opening round, the Coyotes went a little off the board and selected 6-foot-7, 198-pound defenseman Maveric Lamoureux. In addition to size, Lamoureux possesses good skating ability and physicality, which he uses to his advantage.

This past season in the Quebec Major Junior Hockey League (QMJHL) with the Drummondville Voltigeurs, he recorded 24 points on four goals and 20 assists in 54 games, a drastic improvement from the previous season, where he recorded seven points in 24 games during a shortened pandemic season. In 54 games this year, scouts were impressed with Lamoureux’s shooting and transition skills.

While there are areas of improvement Lamoureux can make, there’s no denying that he brings a level of competitiveness to his game. With comparisons to NHL defense Zdeno Chara, Lamoureux has some big skates to fill. Nevertheless, the Coyotes got themselves a solid addition and, with extra development, could find himself a top-4 defenseman in the future.

The Coyotes’ Future Is Bright

Regardless of what some experts think, the Coyotes found themselves as one of the winners of the draft. They found a franchise center, a potential top-six winger, and a defenseman who, with extra development and conditioning, could break into the top-four.

The Coyotes and Armstrong are focused on the big picture, and fans should be as well. The future starts with guys like Keller, Crouse, Doan, Guenther, and Kirk, in addition to the next wave of future franchise talent in Cooley, Geekie, and Lamoureux.

Mr. Evans is originally from Greenville, SC where he currently resides. Mr. Evans has been involved in hockey for the past 18 years now, following the Arizona Coyotes and St. Louis Blues. During his free time, Mr. Evans enjoys spending time with his family and girlfriend as well as being up in the mountains or taking pictures. Prior to joining The Hockey Writers, Mr. Evans previously worked for The Puck Authority, covering the South Carolina Stingrays of the ECHL and FanSided’s Bleedin’ Blue, covering the St. Louis Blues. You can find Mr. Evans on Twitter at @HaynesPEvans.