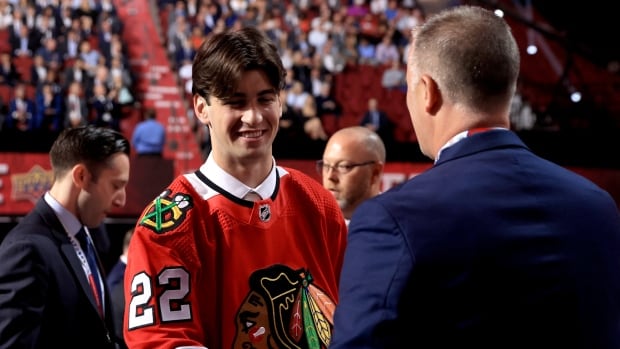 This month has been a roller-coaster of emotions for Ryan Greene of Paradise, N.L. Things hit a high note when the 18-year-old was drafted into the NHL on July 8, after hitting a low two days earlier — when his hockey gear was stolen.

The forward, who was selected with the 57th overall pick by the Chicago Blackhawks, called the draft “nerve-racking” and said he was glad to have his parents, grandparents, aunts and uncles by his side on the big day.

“You see it on the Jumbotron and you hear your name called. It’s just honestly unbelievable,” Greene told CBC News on Thursday.

“To be able to hug your family that are right there with you, they’ve done everything for me, and they’ve been so supportive throughout my career, so it was honestly just amazing.”

Greene said he’d become close with scouts from Chicago throughout the year, but didn’t have his hopes pinned on any one team.

‘Hockey was what I wanted to chase’

He’s off to Calgary on Friday to try out for a spot on Canada’s team at the world junior hockey championships in December, but his path to the big leagues started 15 years ago, when he started skating at age three.

“I knew hockey was what I wanted to chase,” he said.

At 14, he left home to attend South Kent School, a private boys’ prep school in Connecticut in his sophomore year of high school.

“I think it did wonders for me.… I matured a lot there and became more independent,” he said.

Then Greene played junior hockey for two years with the Green Bay Gamblers in Wisconsin in the United States Hockey League.

“From there I ended up getting drafted,” he said.

But things hit thin ice just two days before the draft at the Bell Centre in Montreal, where Greene said the family vehicle was stolen — along with all his hockey gear.

“It was pretty crazy … and the week was going so good up until that point,” he said.

“We pushed through it.… Everyone was a little pissed off at first, but we knew the draft was coming and everyone was still super-excited.”

The theft meant Greene had to use new gear at the Blackhawks rookie camp last week, where competition with other elite prospects is fierce.

“Definitely a bit of a mind game going on, you’re like, ‘this is the last place I’d want to break in a pair of skates,'” he said.

10 Biggest Milestones of the 2022-23 NHL Season
Blues Weekly: Perunovich, Preseason, Chychrun & More
Treaty 6 First Nations woman 1st to join NHL’s Winnipeg Jets as collegiate scout
3 Reasons Why the Blackhawks Could Keep Kane & Toews
‘We’ve gotta do something with it:’ Pens’ veterans back and hungry for another Cup