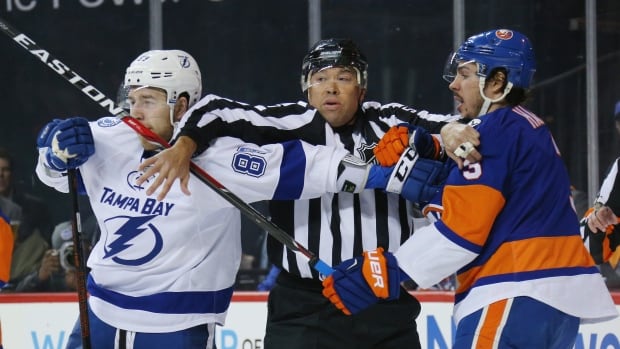 Jay Sharrers made hockey history when he became the first Black linesman in the NHL in 1990.

A little more than 10 years later, history repeated itself when he became the league’s first Black referee in 2001.

Now, Sharrers is joining an elite group of athletes who have been inducted into the B.C. Sports Hall of Fame.

“It’s almost surreal. Obviously, being born and raised in British Columbia to be part of a group that has had so many people come before me that have meant so much to B.C. Sports. It’s a very big honour,” he told CBC.

The 55-year-old grew up in Hope, B.C., located about a two-hour drive east of Vancouver.

His NHL career has spanned over 20 years, where he’s officiated seven Stanley Cup Finals and the 2010 Winter Olympics in Vancouver.

Like many Canadians, Sharrers dreamed of playing in the NHL. But, he says, he realized at a young age that he might not be cut out to make it as a player.

So he started officiating as another way to join the league he admired so much.

“I probably faced maybe a little bit more criticism … just based on the colour of my skin, but based on how my parents raised my brother and I was able to kind of block that out,” he said.

Matt, Sharrers’s brother, says he was ecstatic to hear the news that his brother was joining the coveted hall of fame. Both brothers were involved in hockey from a young age, with Matt continuing to play while Jay began to officiate.

“He was committed to being the best … He is one of the best. So I’m super proud he earned it,” he said.

As the second Black linesman to join the NHL, Shandor Alphonso says Sharrers was someone he looked up to, and who has since been an important mentor to him.

“Jay kind of blazed the path for more officials of colour to show them, ‘Hey, I can do it.’ … Not only did he just do it, he did it at a very high level,” Alphonso said.

When Sharrers broke into the league in 1990, he says he didn’t put as much reverence into being the first Black officiate. Now, it’s something he takes pride and responsibility in.

“There may be other guys, other kids that would perhaps look to me as someone who maybe overcame more challenges than the average kid to to make it,” he said.

After retiring from on-ice officiating in 2017, Sharrers became an officiating manager with the NHL. In his new role, Sharrers says he hopes to share his knowledge of the game and guide a new generation of hockey officials.