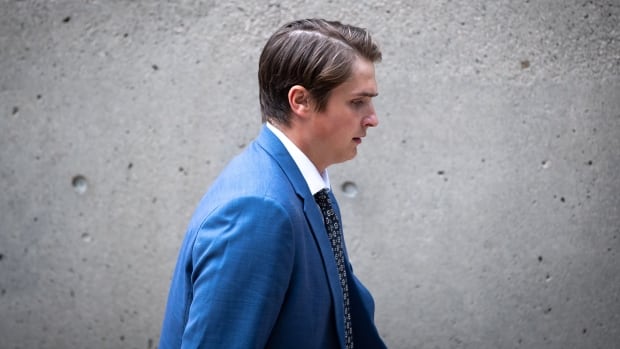 Justice Catherine Wedge told jurors they must deliver a unanimous verdict after an honest, impartial and dispassionate review of the evidence, and they may only find Jake Virtanen guilty if the Crown has proven its case beyond a reasonable doubt.

Wedge told jury members they must otherwise acquit Virtanen, even if they believe it’s likely he’s guilty of allegedly assaulting a woman in his Vancouver hotel room nearly five years ago, because that would constitute a failure of the Crown.

It’s up to the jury to assess the credibility of the 23-year-old woman’s testimony that she did not consent to having sex with Virtanen, who is now 25, the judge said.

“What you must decide is whether the Crown’s evidence, considered in its totality, gives rise to only one inference of fact on the issue of consent, which is that the complainant did not consent to the sexual activity,” Wedge said.

Virtanen was charged with one count of sexual assault in January following an investigation by Vancouver police.

He told the court last week that the woman had been an “enthusiastic participant” as they mutually began kissing and touching each other while lying in bed. They helped each other take their clothes off before having sex, Virtanen testified.

The Crown and defence counsel finished their closing arguments Monday by focusing on the reliability of two witnesses and their conflicting testimony.

Defence lawyer Brock Martland told the jury the woman’s testimony was “riddled” with inconsistencies, some minor and some “fundamental,” arguing she was not a trustworthy witness and saying that wasn’t the case with Virtanen.

He said the evidence shows it’s true the woman didn’t verbally consent to having sex with Virtanen by saying “yes,” but she consented through her actions as Virtanen testified she was an active partner who never said “no” or seemed upset at any point.

The woman was “crystal clear” at the start of her testimony that she didn’t consent to any sexual activity with Virtanen, Martland said, but during cross-examination she accepted an earlier statement she had given to police indicating she was initially OK with kissing him and later objected to continuing or going further.

Crown counsel Alan Ip told the jury the woman had a “firm” memory of the critical details surrounding the alleged assault, and argued that failing to remember or making errors in “minor, peripheral” details does not detract from the strength of her evidence that she repeatedly told Virtanen that she did not want to have sex.

She was “unshaken on major and important points of her testimony,” he said, while arguing Virtanen “concocted and reconstructed” much of his evidence.

Ip asked the jury to dispense with any potential preconceived notions about how someone should or shouldn’t act during or after a sexual assault.

The woman, whose identity is protected by a publication ban, testified that Virtanen pinned her down on the bed in his hotel room in September 2017.

Martland suggested she had persuaded herself and come to believe over time that she didn’t consent to having sex with Virtanen, and the civil lawsuit she filed shortly after publicly accusing him shows she was seeking a payout from an NHL player.

Ip told the jury they should view the civil lawsuit as evidence of the woman’s determination in wanting the alleged assault to come to light.

The court has heard he and the woman met at the Calgary Stampede in 2017, exchanged numbers and kept in touch throughout that summer.

They made plans to meet when she was visiting Vancouver that September and Virtanen picked her up from a friend’s house and drove back to his hotel.

The woman testified last week that she had a “sinking feeling” in her stomach when they arrived, but she trusted Virtanen, so she went up to his room.

Virtanen disputed her testimony that she tried to push him off of her, telling the court she did not seem upset at any point after they arrived at the hotel.

The woman did not go to police at the time.

In April 2021, she posted her story to an Instagram page for survivors of sexual assault, then spoke with a reporter from Glacier Media for a newspaper story, naming Virtanen as the man who allegedly sexually assaulted her.

The Canucks placed Virtanen on leave in May 2021 after the assault allegation was made public, and then bought out his contract the following month.

He last played in the Russian-based Kontinental Hockey League.