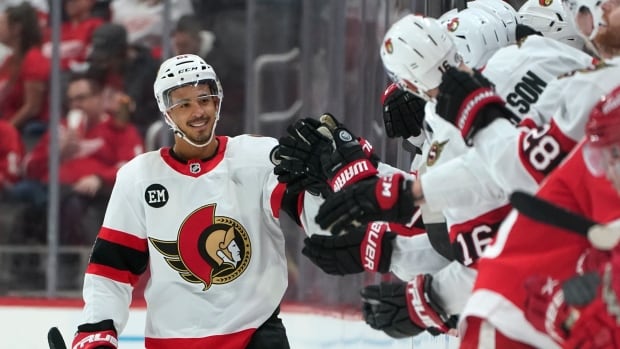 The Ottawa Senators have agreed to terms with forward Mathieu Joseph on a four-year contract extension worth $11.8 million US on Thursday.

Ottawa acquired Joseph in a trade with the Tampa Bay Lightning in exchange for forward Nick Paul in March.

The 25-year-old recorded four goals and eight assists in 11 games with the Senators.

Joseph, of Laval, Que., was drafted 99th overall in the fourth round of the 2015 draft by the Lightning.

He led the team to a league title and was named a finalist for coach of the year.

Robidas had taken a job as an assistant coach with the Quebec Major Junior Hockey League’s Sherbrooke Phoenix last month, prior to accepting the offer from the Canadiens.

Robidas was selected by the Canadiens in the seventh round (164th overall) of the 1995 NHL draft.

He had 57 goals and 201 assists over 937 regular-season games with Montreal, Dallas, Chicago, Anaheim and Toronto.

Robidas joins a rebuilding Canadiens club which finished with a league-worst 22-49-11 record in 2021-22, one season after advancing to the Stanley Cup final.

“We are very lucky to have someone of Stephane’s calibre join our coaching staff,” St. Louis said in a statement. “His recent experience as an NHL player, and his outstanding hockey background, will be excellent assets for the development of our players.”

St. Louis will be heading into his first full season as head coach. He took over as interim head coach on Feb. 9 after Dominique Ducharme was fired and signed a three-year contract on June 1.

The Carolina Hurricanes have re-signed defenceman Ethan Bear to a one-year, $2.2 million contract.

The team announced the deal Thursday, exactly one year since the Hurricanes acquired Bear in a trade with Edmonton.

Bear had five goals and nine assists in 58 games last season. He struggled to find a rhythm after a bout with COVID-19 in late November and was a healthy scratch for Carolina’s 14 playoff games.

“I’ve never been through something like that,” Bear said in June. “Honestly, for a long time, it’s tough; it’s like you can’t breathe but like you don’t know if you’re out of shape or can’t push yourself to that point because you just simply couldn’t. That was the most challenging part.”

The 25-year-old Bear was a restricted free agent who had filed for arbitration, with a hearing set for Aug. 8.

Carolina has made the playoffs for four straight seasons but lost in a seven-game, second-round series to the New York Rangers in May.

The New York Rangers have agreed to terms with forward Kaapo Kakko on a two-year contract worth $4.2 million.

The deal with the No. 2 pick in the 2019 draft carries an annual salary cap hit of $2.1 million. General manager Chris Drury announced the agreement Thursday.

Kakko played in 43 games last season, recording seven goals and 11 assists with a plus-nine rating. The 21-year-old Finn also had two goals and three assists in 19 games during the Rangers’ unexpected run to the Eastern Conference final.