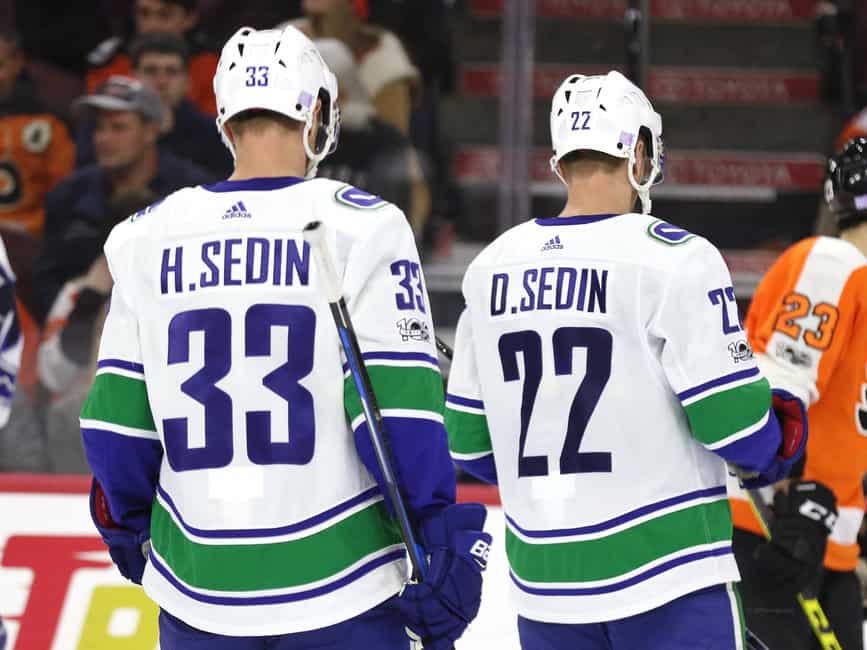 National Hockey League fans in British Columbia have had a lot to be excited about on this date. An all-time great who broke barriers retired, and a talented second-generation star was born on this date, as well. Finally, a rare free agent frenzy made headlines as a plethora of stars found new homes. So, let’s begin our daily trip back in time to relive all the best from July 28.

A Huge Date in Vancouver

Fans of the Vancouver Canucks can fondly look back on July 28, as they welcomed three great players into the franchise on this date. One was already an established legend of the game, while the other two had yet to start their journey to become legends themselves.

The Canucks made a huge splash in the free-agent market on July 28, 1997, when they signed six-time Stanley Cup winner Mark Messier. This was just over three years since Messier had two goals and seven points to help the New York Rangers beat the Canucks in the 1994 Stanley Cup Final. In fact, Messier scored the game-winning goal in Game 7 of the series in Vancouver.

Messier’s time with the Canucks did not play out like it was envisioned when he signed the three-year contract. He scored 22 goals and 60 points during the 1997-98 season, the lowest output in a full season during his career to that point. Injuries caused him to miss 39 games over the next two seasons, which saw him score 30 goals and 102 points.

The Canucks failed to qualify for Stanley Cup playoffs in all three of Messier’s seasons with the team. He returned to the Rangers in the summer of 2000. He played in all 82 games of the 2000-01 season, scoring 24 goals and 67 points.

The Canucks made another memorable deal two years later. On July 28, 1999, they signed both Daniel and Henrik Sedin to their first professional contracts. The twins inked their deals just over a month after general manager Brian Burke made a whole bevy of moves in order to select them second and third overall at the NHL Entry Draft.

These contracts worked out much better than the Messier deal did. The Sedins became the faces of the franchise and the greatest players to ever wear a Canucks uniform. They both played 17 seasons with the team before they retired in 2018.

Daniel played in 1,306 games. He is the franchise leader with 393 goals and second with 648 assists and 1.041 points. He won the Art Ross Trophy, in 2011, for leading the league in scoring with 104 points. He also won Ted Lindsay Award that season for being voted the most outstanding player by his fellow competitors.

Henrik is the Canucks’ all-time leader with 1,330 games played, 830 assists, and 1,070 points. He is seventh all-time with 240 goals. He won the Ross in 2010 when he led the NHL with 112 points. He also was awarded the Hart Trophy that season for being voted by the writers as the league’s most valuable player.

The Sedins are now prominent members of the Canucks again as they accepted roles in the player development department in 2022. They are also scheduled to be inducted into the Hockey Hall of Fame in November along with Roberto Luongo, Daniel Alfredsson, Herb Carnegie and Riikka Sallinen.

Fetisov Hangs Up His Skates

Veteran defenseman Vyacheslav Fetisov announced his retirement on July 28, 1998. Fetisov was one of the first players to come over from the Soviet Union to play in the NHL. He paved the way for not only Russian players to come to North America, but he also helped bring in talent from all over Europe, which changed the league forever.

Fetisov was originally drafted by the Montreal Canadiens in the 12th round (201st overall) of the 1978 NHL Amateur Draft. He re-entered the draft in 1983 and was taken by the New Jersey Devils in the eighth round (149th overall).

He finally reached a deal to come to the NHL in 1989, where he didn’t have to defect, so he could still play internationally for Russia. He made his league debut for the Devils at the age of 31. He played in a total of 546 games for the Devils and Detroit Red Wings. He won back-to-back Stanley Cup with the Red Wings in 1997 and 1998, his final two seasons in the league.

Fetisov returned to the Devils as an assistant coach immediately following his retirement. He remained on the coaching staff through the 2000-01 season and won another Stanley Cup in 2000.

The St. Louis Blues signed free-agent winger Shayne Corson on July 28, 1995. Corson played 11 seasons for the Canadiens after drafting him with the eighth overall pick of the 1984 NHL Entry Draft. He spent the previous three seasons before signing in St. Louis with the Edmonton Oilers.

Corson scored 18 goals and 36 points for the Blues during the 1995-96 season. He was traded back to the Canadiens just 11 games into the 1996-97 season, along with Murray Baron and a fifth-round draft pick, for Pierre Turgeon, Rory Fitzpatrick, and Craig Conroy.

Three years later, on July 28, 1998, the Blues inked Scott Young to a deal. The veteran forward won a Stanley Cup with the Pittsburgh Penguins in 1991 and the Colorado Avalanche in 1996. He had a very nice four-season run in St. Louis. He scored a career-high 40 goals and 73 points during the 2000-01 season.

Young signed with the Dallas Stars in 2002 but returned for one final season with the Blues in 2005. Over his five seasons with the team, he scored 125 goals and 254 points in 377 games. He played for seven different teams during his 17-season career and had the most success with the Blues.

Due to the COVID-19 pandemic, NHL Free Agency began on July 28, 2021, instead of the familiar July 1. As always, that meant a bevy of major signings.

On July 28, 1992, the Canadiens signed undrafted free agent Donald Brashear. He made his NHL debut for the Canadiens in 1993 and played with them until he was traded to the Canucks in 1996. Brashear played 16 seasons in the NHL for the Canadiens, Canucks, Philadelphia Flyers, Washington Capitals, and Rangers, scoring 85 goals and 205 points in 1,025 games. Unfortunately, he is best remembered for an ugly incident in 2000, when Marth McSorley intentionally slashed him in the face.

The Boston Bruins signed veteran forward Tom Fitzgerald on July 28, 2004. He scored four goals and 10 points in 71 games with the Bruins during the 2004-05 season, his final in the league. He also spent time with the New York Islanders, Florida Panthers, Avalanche, Nashville Predators, Chicago Blackhawks, and Toronto Maple Leafs. He was the first captain in Predators franchise history, serving between 1998 and 2002. Fitzgerald is currently the general manager of the Devils.

Of the 28 current and former NHL players born on July 28, there is no doubt that Zach Parise has had the most successful career. Parise, born in Minneapolis on July 28, 1984, leads this entire group with 1,060 games played, 393 goals, 417 assists, and 810 points. He scored at least 30 goals in five out of his seven seasons with the Devils. He signed with the Minnesota Wild in 2012, just weeks after reaching the Stanley Cup Final with New Jersey.

The late Charlie Hodge, born on this date in 1933, has the most wins out of the five goaltenders who have July 28 birthdays. He won 153 games with the Canadiens, Oakland Seals, and Canucks between 1955 and 1971. He was the backup netminder for the Canadiens during their 1965 Stanley Cup championship.

Defenseman Dennis McCord owns the distinction of playing the fewest games among those born on this date. He played in three games for the Canucks during the 1973-74 season.