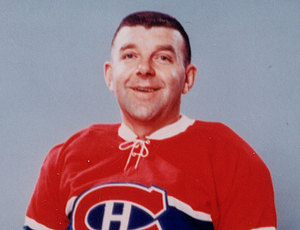 Lorne “Gump” Worsley, born and raised in Montreal, was the last NHL goalie to play without a mask.  “My face is my mask,” he would say, refusing to don facial protection.  He acquired the nickname Gump as a youngster due to his facial resemblance to Andy Gump, a cartoon character of the time.

After two years with the QJHL Verdun Cyclones, his early pro career was spent in the minors (EHL, USHL, WHL) where he succeeded three years in a row to be named to the First All-Star team and the league’s top goaltender.

In 1952 he signed with the not-very-successful New York Rangers, playing 50 games with a 3.09 goals-against-average and winning the Calder Trophy as NHL rookie-of-the-year.  The following season he came to camp somewhat out-of-shape and lost his job to Johnny Bower.  The Gumper ended up playing the entire 1953-54 season in the WHL for the Vancouver Canucks, starting 70 games and garnering the league’s MVP award.

In 1954 he returned to the Rangers where he toiled between the pipes for ten years.  The team was rather hapless and Worsley’s sharp sense of humor was one of the few bright spots on the team.  After being pelted night after night with fourty to fifty shots, he was asked by the press “Which team in the league gives you the most trouble?”  “The New York Rangers,” he quipped.  When Phil Watson chided him in the newspapers about his conditioning and accused him of having a beer belly, Gump retorted: “I do NOT have a beer belly.  I only drink Seagram’s VO and ginger ale.”

Worsley to the Canadiens

In the summer of 1963, the Canadiens rewarded his brilliant play in the New York net by trading for him, sending Jacques Plante to the Big Apple in a transaction that shook the hockey world.  Despite his elation at coming home to play in Montreal, he got off to a rocky start, spending most of his first two years playing for the Quebec Aces, the Habs farm team.

Finally, late in the in 1964-65 season, he became the team’s Number One backstop.  His frenetic style and his overwhelming desire to win made him a Forum favorite. He led the Canadiens to four Stanley Cups in the next five years.  Always better when the chips were down, his playoff GAA over those five years was 1.91.

In 1965-66, he won his first Vezina Trophy (shared with Charlie Hodge). The following year he had probably his best year in hockey,.  After playing only 40 regular season games but leading the league in GAA with 1.98, he stepped up in the playoffs.  Playing sensational hockey he played in 12 of the team’s 13 games and was a perfect 11-0.  He and Rogie Vachon were named Vezina winners once again.

Gump loved life and hated flying.  He hated flying almost as much as he hated practicing.  Mickey Redmond found that out one day at practice in his rookie year.  “I whizzed one past his head one day in practice,” says Redmond.  “The next thing I know, here comes Gump’s stick aimed at my head like a helicopter blade.  Then he charges out of the net at me , grabs me by the sweater and says, “Thanks a lot kid. You just gave me a perfect excuse to leave practice early” before stomping off to the locker room.

Gump’s fear of flying was well earned.  While still in the minors the left engine of a plane carrying the New York Rovers caught fire in the air and was forced to land unexpectedly.  Facing NHL shooters like Bobby Hull was easy for him compared with boarding a flight to the team’s next destination.

One night, while on a trip to Los Angeles, the plane hit some bad air and dropped ten thousand feet before the pilot righted the ship.  Gump got off the plane in Chicago and took a train to L.A.   Early in the next season the idea of more flights became impossible to bear and he retired from hockey.

He eventually was enticed out of retirement by the Minnesota North Stars and played another five seasons before his final retirement.  “ I knew it was time to quit,” he said, “ when the sons of the guys who’s scored on me started to score on me.”

Gump Worsley brought a little sunshine and a little laughter into the lives of everyone who knew him.  His urging at the beginning of every game, “Ok, Boys.  Let’s win one for the Gumper,” is well remembered by those who followed him onto the ice.  A beloved teammate, a fan favorite and a devoted family man, he was inducted into the Hockey Hall of Fame in 1980 and passed quietly in the night at his home in Beloeil, QC on January 26, 2007.

This article was originally written in September, 2010.