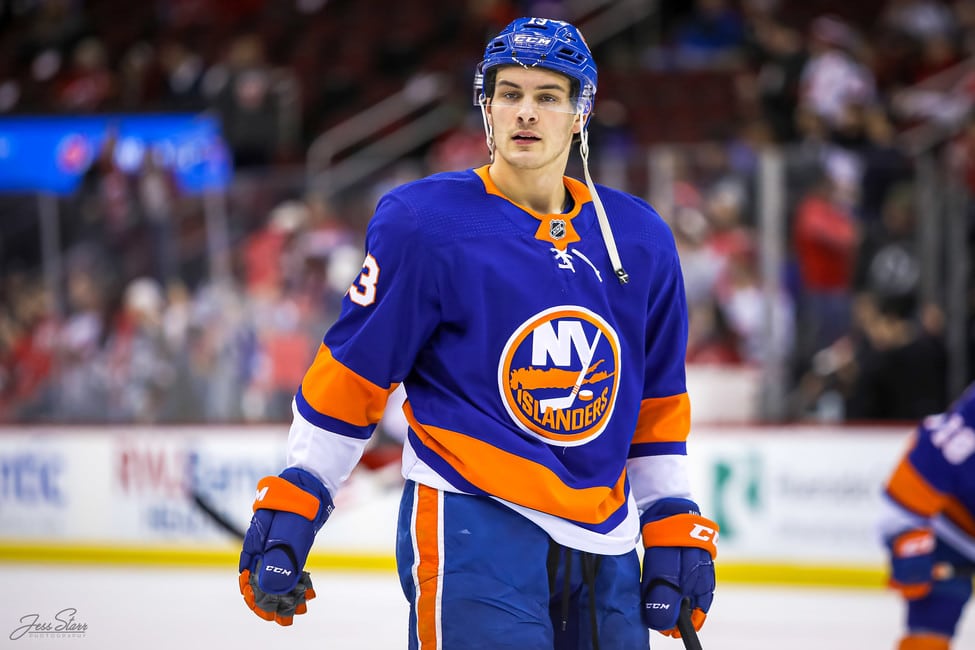 The New York Islanders will spend the rest of the offseason trying to put together a roster that can bounce back and make the Stanley Cup Playoffs next season. With the team hoping to make a splash, all eyes have been on general manager (GM) Lou Lamoriello and whether he can make something out of what has been a quiet offseason so far.

Most recently, Lamoriello has been linked to center Nazem Kadri, who remains a free agent despite a career year in 2021-22. If the Islanders sign him, the move will mean a few adjustments, with some players possibly being traded or shifting positions. Given the team’s depth, it will be important for first-year head coach Lane Lambert to find a way to fit all his players into the lineup and allow some to thrive even if they play out of their natural position.

This is the most notable player who will likely move positions. Mathew Barzal is arguably the Islanders’ most talented player and often leads his line from the middle. While he’s not the best scorer, his skating and overall playmaking ability make him a top-line forward and someone who can lead his shift. If the Islanders sign Kadri, Barzal could be moved to the wing so the two can play on the same line next season.

The question is how Barzal will do on the wing instead of centering a line and if it will affect his overall production. The negative consequences would be limiting his skills, especially if he can’t open up the ice in the neutral and offensive zones. Likewise, if he is the primary puck-handler, can he still create scoring chances from the wing, or would his role change altogether, forcing him to take more shots and finish scoring chances?

Despite the question marks, Barzal would still likely thrive on the wing. For starters, his big plays on the rush would remain where he can gash opponents with speed and skating in transition. Also, handling the puck less might benefit the team as he has a great shot but often struggles to find open looks at the net or is unwilling to shoot the puck altogether. Furthermore, regardless of the center on his line, as a playmaker, he’ll still open up the offense from the wing and create scoring chances for the team.

It might sound crazy to move Brock Nelson from center to the wing. As the best forward on the team last season, scoring a team-leading 37 goals and 22 assists, creating both scoring chances and finding the back of the net with his remarkable instincts. Moving him could result in a drop in production, making this move a bigger risk, to say the least.

However, as the Islanders remain interested in acquiring Kadri, this shift could happen. While Nelson is a talented center, he’s also a versatile forward who could adjust to a new position and even thrive in a different role. On the wing, he would remain both a distributor and a natural goal scorer and possibly score more goals with more open ice and better looks at the net.

Furthermore, Nelson moving to the wing could make room for him to play alongside Kadri and Anders Lee. The three veteran forwards on the same shift would not only provide experience, but it would also give the Islanders three goal scorers on the ice at the same time. Kadri and Nelson would double up as puck facilitators, but the two could easily find the back of the net when given the opportunity and, as a result, would give the Islanders a great top line.

Anthony Beauvillier took a step back last season, scoring 12 goals and 22 assists, raising concerns about his fit with the team moving forward. As a natural left-winger, he’s struggled on the right side, playing alongside Nelson and Lee, and couldn’t find his role. Next season, he could again move to the right wing, but that might continue to hurt him and the Islanders as they struggle to get production from their young and talented forward.

It’s unclear if Beauvillier will be on the team next season as he’s been on the trade block throughout the offseason. However, if he stays, which would signal management’s confidence in him and the core overall, it will likely be in a different role and a different position. Under Lambert’s faster system, Beauvillier could play the right wing on a Barzal-led line, which would allow him to play with speed and find open shots in the offensive zone. Similarly, the 25-year-old could transition into a primary puck-handler, which would take pressure off some of the other skaters on his line, but that would hinge on his ability to rebound from a difficult campaign. Ultimately, he’s looking to bounce back, and with a new role in the forward unit, he will also likely see a positional change and maybe many changes as the season progresses.

Other Islanders Who Could See a Positional Change

Prospect Aatu Raty is becoming a star and is everything the team was hoping for when he fell to the second round of the 2021 NHL Entry Draft and then some. As he continues to impress at both the World Junior Championships and throughout his development, the likelihood of him joining the NHL roster increases. However, Raty naturally plays center and would move to the wing if he joined the roster. Likewise, Jean-Gabriel Pageau is one of the best two-way players on the team but could see a positional change from the middle-six, especially if Nelson and Barzal stay at their position.

On the defensive side, it’s possible that Scott Mayfield could move from the right side to his weaker side. While not ideal, it might be the best option if Grant Hutton is on the starting roster, as he is also a natural right-side defenseman.

The Islanders’ roster is carried by its depth, and the team reached the Stanley Cup semifinals in back-to-back seasons largely because of that depth. This season, it will be tested and will be critical to the team’s success as some players will have to be versatile and change positions.

Mike Fink joined The Hockey Writers in November 2020 and covers the New York Islanders. In addition to covering the Islanders, Fink writes about the NHL at large and contributes as a weekly guest to The Hockey Writers Podcast. Follow Mike on Twitter @Finks_thoughts for more Islanders and general hockey insights.