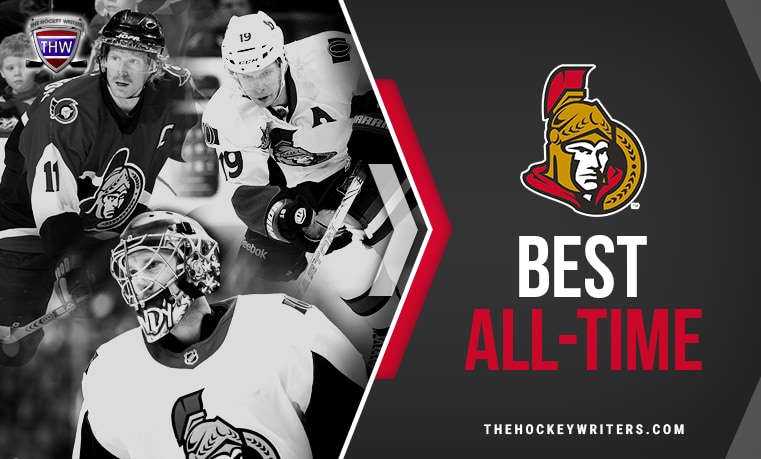 The Ottawa Senators have had a number of franchise faces since their inception in 1992. Many fans ask common questions about their teams as to whom would be their prospective best players of all-time. Naming a group of Senators players was an interesting exercise in examining what defines “The Best”.

I assembled a list of four Senators players for this list. My choices for the best all-time Senators are not just reflective of their statistics with the team, as some players have fewer points than others that don’t make my list. I chose them based on multiple factors, so some debatable players have been ignored. Without further adieu, here is my list of best Senators of all-time.

Who else but Daniel Alfredsson? The long-time Senators captain is without a doubt worthy of being the greatest Senators player ever. His 1,157 points are by far the most of anyone in Ottawa. His captaincy from 1999 to 2013 is the longest in franchise history and is the period of time in which the team saw its longest and most consistent success in the regular season and playoffs. He is the franchise leader in goals, assists, and points, and the face you see when thinking about the Sens.

His leadership was also instrumental in not only his success but in the success of those around him. The six-time All-Star was a major part of the franchise’s rise from mediocrity, into the contender that they became in the late 1990s and 2000s. His playoff numbers are also remarkable, with 100 in 121 games, and an appearance in the 2007 Stanley Cup Final.

His 103-point season in 2005-06 was his career year, finishing within the top five for the Lady Byng, Selke, and Hart Trophies. Even though Alfredsson did not win any major awards aside from his Calder in the 1995-96 season, he was one of the most consistent players of the 2000s. He was the face of the franchise from his arrival and remains the biggest icon in Ottawa, not only for his playing ability but for his added philanthropy in the city.

You cannot think of the Senators without Alfredsson, and even if his records do eventually get broken, he will still have his place in Senator’s lore. When his number was retired in December 2016, that spot was guaranteed to be forever remembered. No matter what happens, he is still the greatest Senator to play the game.

Jason Spezza is in my opinion, one of the best Senators ever. When Spezza was drafted second overall by Ottawa in 2001, it signified the change of the Senators from an expansion franchise into a dominating force of the 2000s. Spezza became the first high draft pick the Senators chose who became a star in the NHL (no offence to Alexei Yashin).

Spezza’s time in Ottawa would be marked as his emergence as the best playmaker in Senators’ history. In 686 games in Ottawa, Spezza is one of only two Senators who hold more than a point per game average in the NHL. Spezza compiled 251 goals and 436 assists while in a Sens sweater, both of which are second in franchise history.

When he succeeded Alfredsson as captain in 2013, he could not live up to the expectations, resulting in his trade to the Dallas Stars during the summer of 2014. Like other players in Senators’ history, his last days in Ottawa took away from how good he was. Despite that, I maintain that he is not only underrated in Ottawa, but the best centre to play for the team.

The greatest goalie in Senators’ history is a lock for a place on this list. When Craig Anderson arrived via trade in the middle of the 2010-11 season, the Senators were lacking in terms of a stable, No. 1 goaltender. By the end of the season, though, the team had their man in net.

The Senators franchise record holder in wins, games played, and second in shutouts, Anderson played his way into club lore. Since his debut, he consistently kept the team in games where they had zero business winning. When looking at his playoff numbers, it gets better. He is within the top five in all major categories, including being tied for the record for wins with 21.

Anderson’s character also came to the forefront when his wife Nicole was dealing with her cancer diagnosis during the 2016-17 season. (from ‘Update: Craig Anderson will play tonight, cancer-stricken wife says team needs him,’ Ottawa Citizen, 10/30/2016) While his wife was fighting the disease, he led his team to the Eastern Conference Final. His season also included an emotional 2-0 shutout win in Edmonton on Oct. 30, 2016.

In more recent years, Anderson has taken the bullet for the Senators. While the majority of the Senators playing with Anderson left, he remained in Ottawa. It’s a price he paid with his stats. Despite not having much help, he did the best he could, and while his numbers over the last three seasons have not been acceptable, Anderson is both a face of the Senators franchise and one of their best players.

Like Alfredsson, Erik Karlsson’s image is synonymous with the Senators. He is the dictionary definition of the modern-day defenseman. His puck skills and vision of the ice is something to marvel and is reflected in his point totals. He is currently the franchise leader in points by a defenseman, and third in franchise history with 518. His points per game average are 10th in team history, 15 spots above the next defenseman. When he was drafted 15th overall in 2008 out of Frölunda in the Swedish Hockey League, he was considered very small, and underweight for his position. While it took a few years, Karlsson grew into the best defenseman in team history.

Karlsson dominated the NHL for nearly a decade, winning two Norris Trophies, and placing second two more times while in Ottawa. His 82 points in the 2015-16 season is still a record for a Senators defenseman. A torn Achilles tendon in 2012 did set him back, but he was still able to perform at a top level for many years. Serving as captain from 2014 to 2018, he was able to remain at his elite level of skill, while also providing leadership for younger defensemen.

Like the others on this list, his tenure ended poorly during Ottawa’s fall to rock bottom in 2018 with a trade to San Jose. Until the end, Karlsson was loved in Ottawa and was given the appreciation he deserved by Sens fans. He remains the best blueliner to play for the Senators and will be remembered as such.

Chris Phillips is, unfortunately, the odd man out here. While an icon in Ottawa, he just missed the threshold for what I consider the best.

Phillips was the ultimate stay-at-home defenseman during his time in Ottawa. The franchise’s first overall pick in 1996 became a mainstay during his 18 years in Ottawa. The franchise leader in games played with 1,179, recently had his No. 4 retired, joining Alfredsson as the only two modern-day Senators to have that honour. The longtime alternate captain was a symbol of the Senators on and off the ice, his No. 4 always engaged with the puck, or with an opposing player.

While Phillips didn’t have much of an offensive game, he was an anchor on the back-end. He was within the top 15 for the Calder voting in the 1997-98 season, rare for a 19-year old defenseman with only 16 points. He was never a flashy player but managed to finish within the top 20 in voting for the Norris Trophy in 2007 and in 2010. He also scored one of the most famous goals in team history, when he beat Martin Brodeur to send the 2003 Eastern Conference Final to a Game 7.

Phillips was an integral part of the Senators franchise, and one of their best defensemen. He wasn’t a player who would wow you whenever he stepped on the ice, but he made his presence known. While he just missed being the best, he will still be very much remembered in Ottawa.

To conclude, the Senators have many fantastic players, but only a handful can be considered the true best of the best. The names Alfredsson, Spezza, Anderson, and Karlsson, will truly go down as the best to ever wear the Senators uniform.