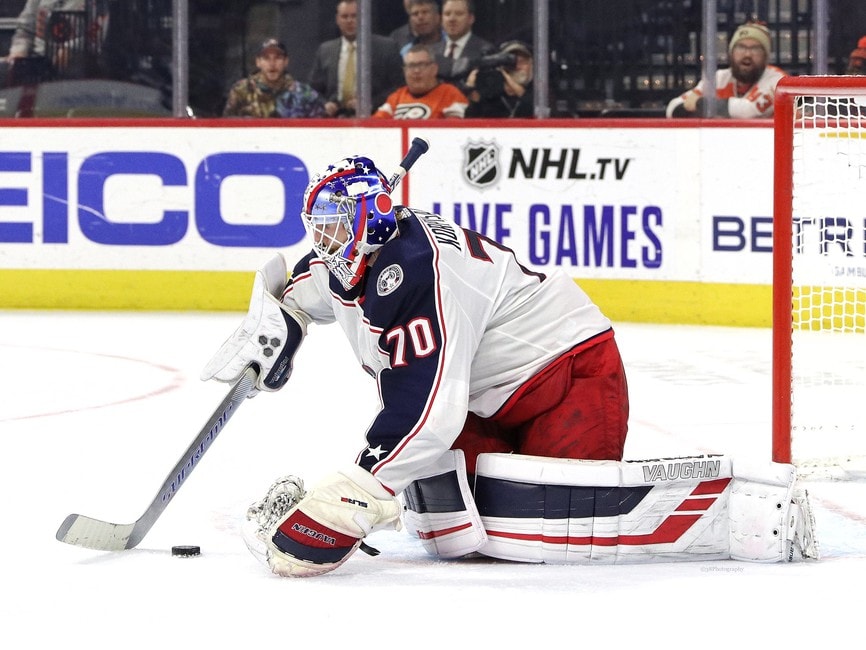 In 2015-16, Joonas Korpisalo made his NHL debut for the Columbus Blue Jackets and out-played former Vezina Trophy-winning goaltender Sergei Bobrovsky. Elvis Merzlikins was starting to make a name for himself, playing in the Swiss National League with HC Lugano, as well as playing for Team Latvia in international play.

That said, if you asked most Blue Jackets fans who the future of Columbus goaltending would be, they would say Korpisalo by a long shot. He had some incredible stretches early in his career, and many often questioned whether he should start over Bobrovsky. However, after the two-time Vezina winner moved on to the beaches of Florida, the Finnish goaltender was unable to win the starting job and is now barely holding on to an NHL job.

Many thought the 2021-22 season would be the last time Korpisalo represented the Blue Jackets. However, general manager (GM) Jarmo Kekalainen surprised everyone by re-signing Korpisalo to a one-year extension in May. Many thought he’d be moved at the trade deadline; however, once that passed, it was clear he’d become an unrestricted free agent. Hockey is full of surprises, though, and now he has one final opportunity to show Columbus what he can do. But his roster spot is far from guaranteed, with Daniil Tarasov aiming to become an NHL regular as soon as possible.

Korpisalo has one major obstacle standing in his way: his health. He suffered a hip injury toward the end of the 2021-22 season, and although he’s nearly recovered, he may not get much ice time in the preseason. Tarasov has been going through a similar recovery process. He was injured before Korpisalo but has had no issues being cleared for training camp and the preseason. This will give him a substantial advantage, especially if he can play at a high level during that period, it might affect head coach Brad Larsen’s decision.

Given the Blue Jackets’ goaltending depth, there’s little opportunity for Korpisalo to remain with the team long-term. Merzlikins is the starting goaltender, and although there is some uncertainty after him, management will eventually want to go with a younger backup once a prospect, likely Tarasov, is ready, especially since the team has committed to Tarasov for multiple years. That’s not all bad news for the Finnish goalie, though, as this season will give him another chance to make an impression around the league. After the last couple of seasons, he may not be a valuable asset; however, a bounce-back season can certainly add some interest from other GMs.

It’s unlikely a team will be willing to take a chance on Korpisalo to be their starter, even if he exceeds expectations in 2022-23. With that being said, a team with unstable goaltending might be willing to add him as part of a tandem. This would put him in a similar situation to the past couple of seasons before Merzlikins ran away with the starting job, and he surely wouldn’t want to lose that spot for a second time.

Of course, that would be the best-case scenario. The other options, which are more likely, are that he’ll be offered a stable backup role or that he will fall out of the league entirely. This season is the most important of his career, and if he wants to stay in the NHL, then he’ll need to prove that he belongs. If he’s unable to do that, there’s no guarantee he’ll get another opportunity from another organization, and it’s very unlikely he’d get another from the Blue Jackets.

William Espy is a graduate of California State University, Stanislaus. He has been writing about hockey since 2016 on various platforms. He currently covers the Columbus Blue Jackets but had a previous stint covering the Calgary Flames.